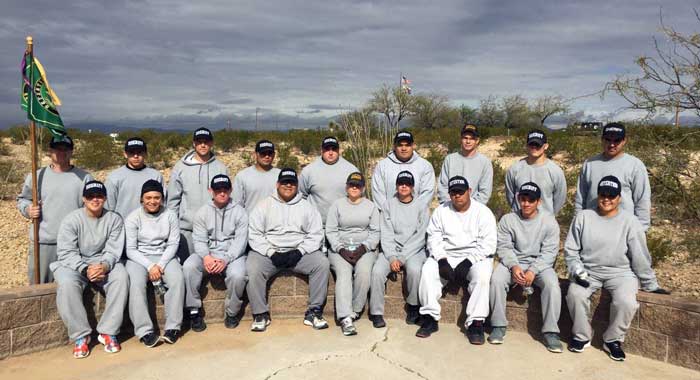 The physically and mentally demanding six-week academy was under the direction of Graham County Detention Facility  Commander Tim Graves and Sargent Noe Esperas, as well as other trainers for specialized courses in CPR, defensive tactics, correctional functions and physical activities. The academy originally started with 28 cadets from county detention facilities from all over Arizona, and concluded with 18 graduating cadets, who successfully completed the training and were presented at a graduation ceremony for family and friends.

One of the culminating activities of the academy was a six-hour service project that was completed at EAC’s Discovery Park Campus. The large storm that hit the area in early October caused severe erosion damage to the “Sunset Point” lookout vantage, and also along the narrow road to the training facilities. Due to the steep terrain of the lookout, the washed out area was not accessible by tractor for repairs, meaning that all of the rock and soil that had washed down the 45 foot hill had to be carried back up by hand in buckets and placed to reduce future erosion problems.

“The washed out area beneath ‘Sunset Point’ alone required approximately four tons of material to restore,” he said.  “Cadets layered softball- to watermelon-sized boulders over the entire area, filled in the small spaces with baseball sized rocks and then covered it all with two to three feet of soil. It was a lot of hard backbreaking work, and when it was completed, we moved on to the two large washouts along the road and each of those required another ton of material to fill.”

“I was impressed by their amazing attitudes and lots of laughing and funny comments, but not one complaint despite the difficulty.  I also noticed their camaraderie and examples of teamwork; they quickly formed a ‘bucket-brigade’ to hand up rocks and the buckets of soil. Everyone did their part.”

The EAC Discovery Park Campus is looking forward to working with the Graham County Adult Detention Facility, Commander Graves, and Sargent Esperas with future academies and trainings.  For more information contact Anger at EAC’s Discovery Park Campus at (928) 428-6260 or by email at paul.anger@eac.edu.