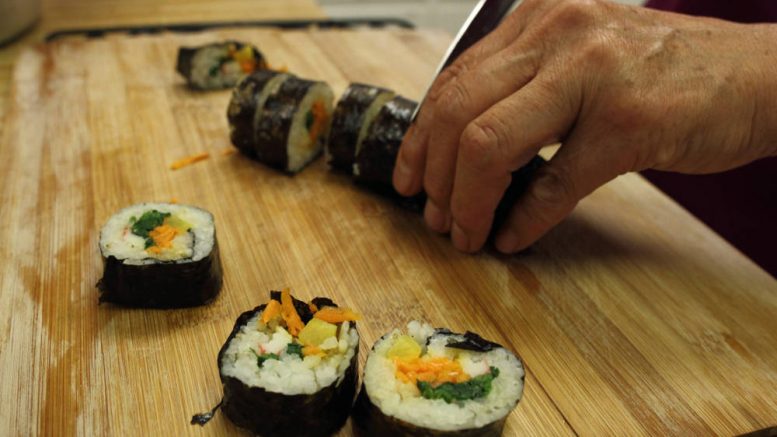 SAFFORD – The art of making traditional Korean sushi is well-represented in the Gila Valley, thanks to Sunki Armaes and sushi-making style, which commemorates her ancestors and represents a simpler time.

Armaes taught seven sushi students how to make the dish in a free class hosted by Our Neighbor’s Food Pantry on Monday afternoon. She said the trend in American sushi is to change recipes and ingredients in ways contrary to the heart of traditionally Korean sushi. Preserving traditional sushi methods is critical to Armaes.

According to Armaes, the process begins and ends with the seaweed. Start with a paper-thin sheet of seaweed, shiny side down. Season carrots and boiled spinach with sesame oil, ground sesame seed and salt to taste. Stir-fry the carrots. Press sticky rice into a thin flat layer on top of the seaweed, add the carrots, spinach, pickled radish and crab meat in a line down the middle. Roll the whole sheet into a tight spiral, using the sticky rice to help hold the roll closed. Slice the roll into bite-sized sizes. That is how to make sushi the traditional Korean way. 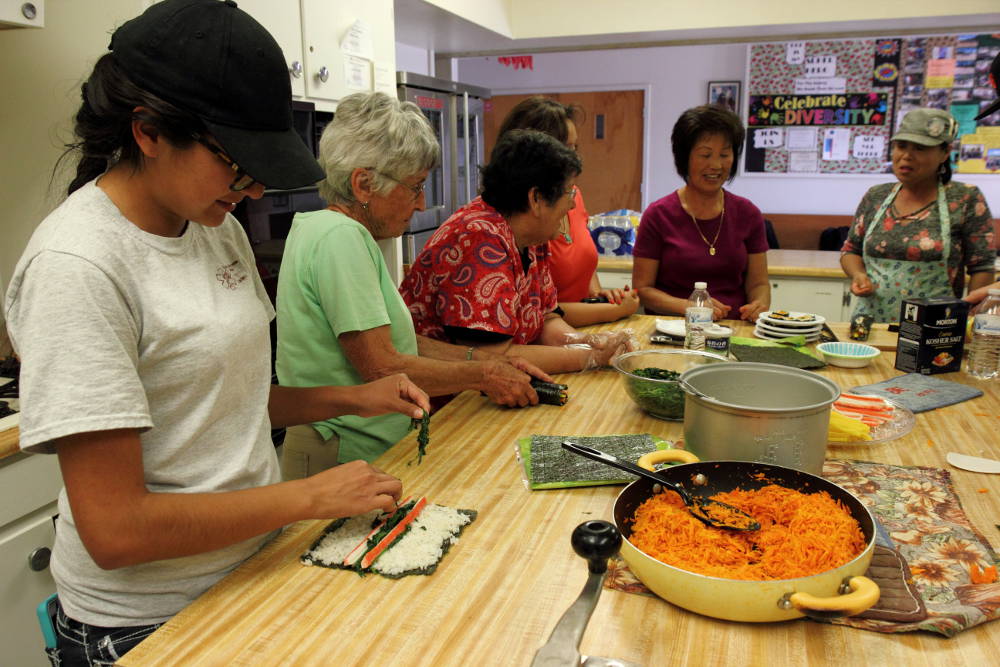 When she was a little girl living in lower-class Korea, sushi was a delicacy that Armae’s family could afford only three times a year. Her mother taught her how to make the dish, and it is one of the few links Armaes has left to a bygone world. In the 30-plus years that Armaes has been in the United States, the Korean economy has accelerated Korea to a fast-paced lifestyle with new levels of wealth and technology. Armaes thinks young people grow up too quickly today. She commemorates her late mother by making sushi.

“As I grow older, I miss my mom (and) what she taught me,” Armaes said. “I wish I could share this with her.”

She celebrates her heritage by sharing the unique Korean food with anyone willing to learn to make it. 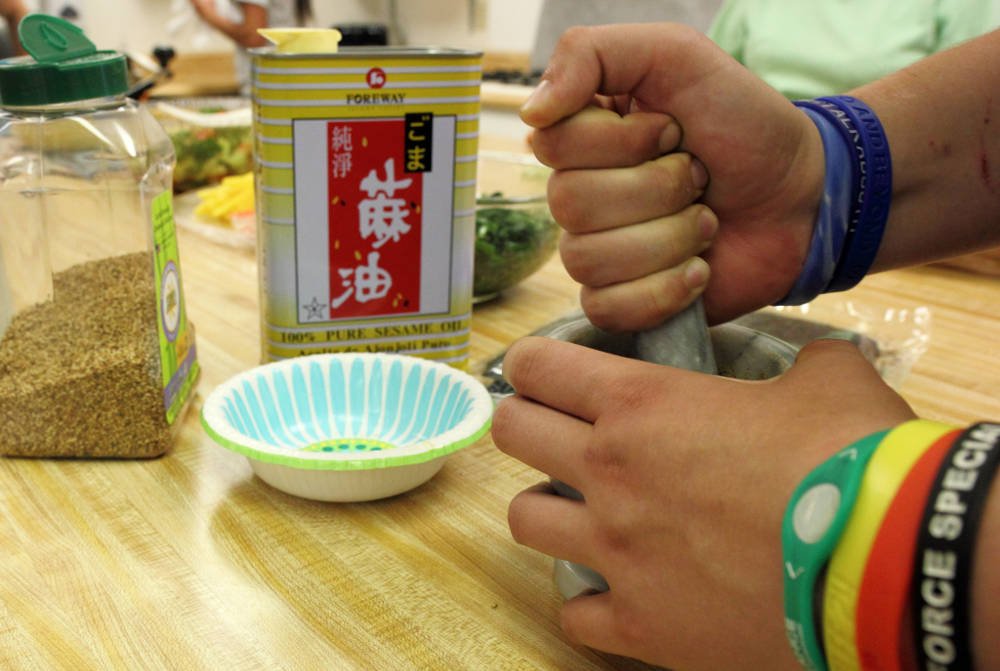 Armaes shared some tips: First, buy fresh sesame seed and roast and grind it yourself for maximum flavor. Season the rice with the ground sesame, sesame oil and salt.  Add a hint of brown sugar to the carrots. Armaes does not like to use fish, but she does use crab meat and imitation crab. Armaes has to buy some ingredients from a Korean store in Tucson. Beef, although traditionally very expensive, also works if cut thin and marinated in sesame oil, soy sauce and onion.

Perhaps most importantly, Armaes instructs to do it the old-fashioned way.

“We don’t measure, we just put (the ingredients) in with our hands,” she said.

Sushi lasts at least a day at room temperature, so do not refrigerate or freeze it. It does not re-heat well, making it a special-occasion food meant to be eaten in one day. 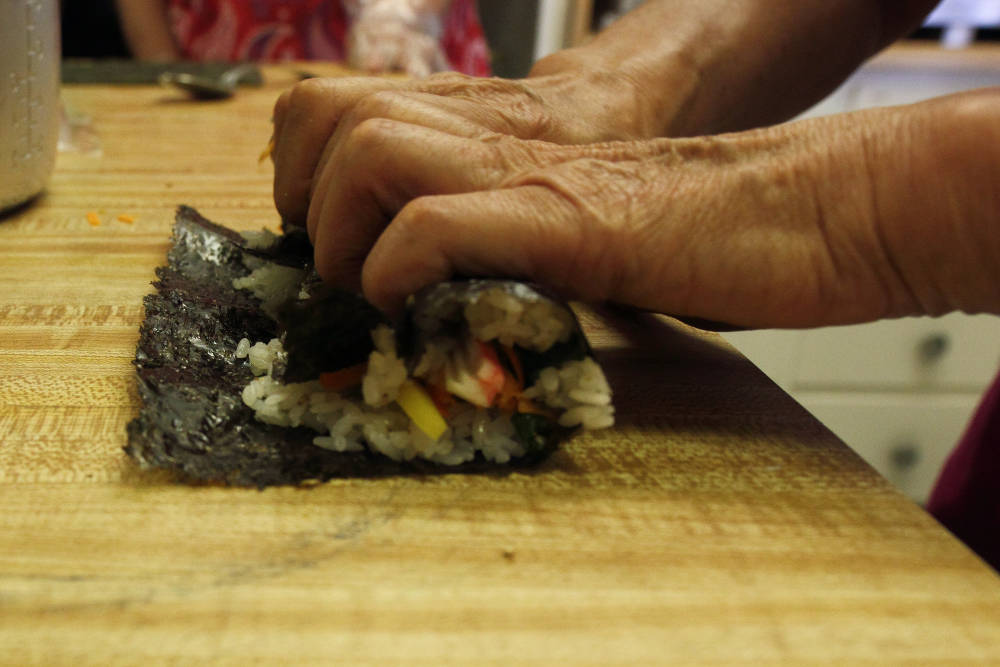 The class agreed that the finished sushi was at least as good as the food at Sushi King Uno in Downtown Safford.

“This would be easy to make in a dorm, just with a little fryer,”said class attendee Buddy Romero.

Sushi lover Marisela Pennington said sushi is a surprisingly quick meal to make that is light and healthy.

She said the sushi had “a clean vegetable taste.” 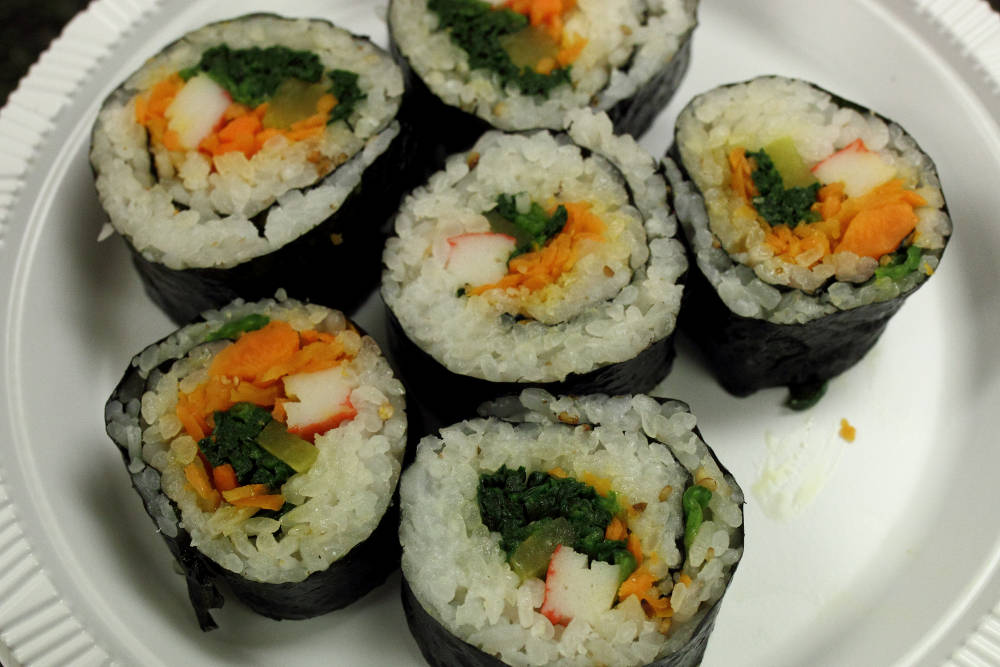 Armaes said it is acceptable to substitute any ingredients that taste good, and Chinese cabbage can be used instead of seaweed. However, she warns changing the ingredients changes the authenticity.

“The sushi in Downtown; they do the cucumber, they do the lettuce, but that’s not a real one,” she said. “I’m still cooking what my mom taught me when I was little.”