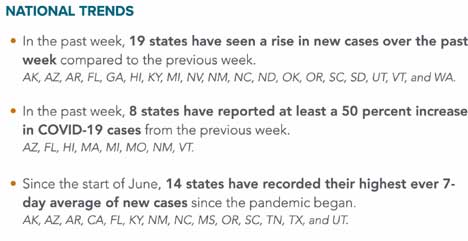 PHOENIX — “We are well prepared to manage an increase in patient volume,” Arizona Gov. Doug Ducey said in his regular Thursday press conference on what the state is doing when it comes to COVID-19.

While in the past he’s used the press conference to announce executive orders closing certain businesses, as well as the expiration of those orders and the reopening of the state’s economy, this press conference focused on the state’s hospital and ICU bed capacity, following reports that Arizona could run out of medical care space due to the increased number of COVID-19 cases since May 15.

Ducey displayed a number of slides showing the number of ICU beds available versus the number in use by COVID-19 patients, as well as ventilators and total hospital capacity.

Despite repeated questions from reporters about those increased numbers, Ducey would not commit to any slowdown in the economy’s re-opening or mandating that masks be work when out in public. He also would not commit to allowing counties or cities to enact regulations more stringent than the state.

“We know that it’s in the community,” said Dr. Cara Christ, director of Arizona Department of Health Services. “We are not going to be able to stop the spread, so we can’t stop living as well.”