SAFFORD – A couple driving in their new car saw the vehicle totaled before even making the first payment when they were struck by an alleged drunk driver who ran a red light Sunday night.

According to a Safford Police report, Robert Allen Martin, 35, of Clifton, was northbound on 8th Avenue in a blue Chevy pickup truck with a Confederate flag in its bed at about 8 p.m. when he failed to stop at a red light at the intersection with U.S. Highway 70 and collided with a westbound white, 2016 Ford Fusion, driven by Megan Milton. 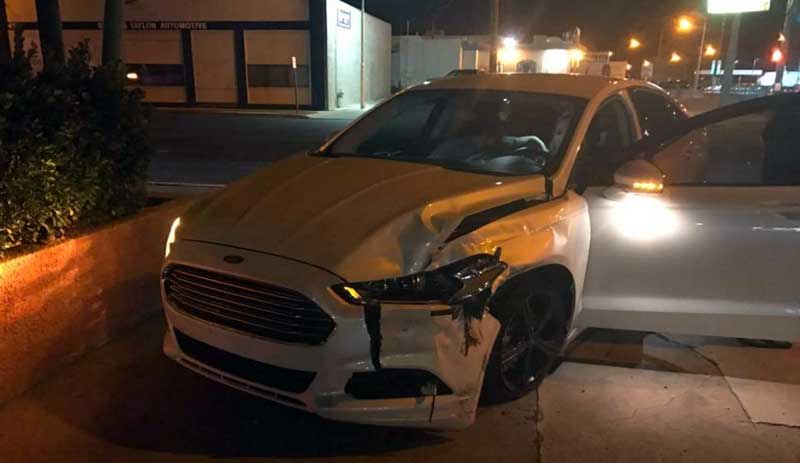 Contributed Photo/Courtesy Megan Milton: This white Ford Fusion suffered damage to both its front and rear quarter panels after being hit by an alleged drunk driver Sunday night.

The impact caused the Fusion to roll near the sidewalk on the northeast corner of the intersection. Megan Milton and her passenger, Marco Milton, initially denied medical treatment, but Megan was later transported to Mt. Graham Regional Medical Center for evaluation of a possible neck injury.

The Miltons and several witnesses all said the truck “came out of nowhere” and ran the red light. One witness who was behind Martin while northbound on 8th Avenue said Martin initially stopped and appeared that he was going to make a right turn before heading straight through the intersection. He also said the truck appeared to be swerving prior to reaching the intersection.

Contributed Photo/Courtesy GCSO: Robert Martin was booked into the jail on a warrant for failing to appear in Duncan Justice Court on a charge of having an open container in a vehicle.

After the collision, Martin parked his truck in the Triangle Liquor dirt parking lot. As an officer approached the truck, Martin took off all his clothes except for his underwear and socks, kneeled down and put his hands on the back of his head while saying that he was unarmed. An officer later noted Martin had soiled his clothing and that he showed multiple signs of impairment, including having bloodshot eyes and slurred speech. Additionally, an open container of liquor was found on the truck’s floorboard.

After failing all six aspects of a field sobriety test, he was taken into custody and had his blood drawn for testing purposes.

Officers also learned Martin had an active warrant for his arrest for failing to appear in Duncan Justice Court on a charge of having an open container of liquor in a vehicle. He was then transported to the Graham County Jail and booked on his warrant.

The truck, which apparently was also not insured, was impounded by police. Both vehicles were removed from the scene by Nutcracker Towing.