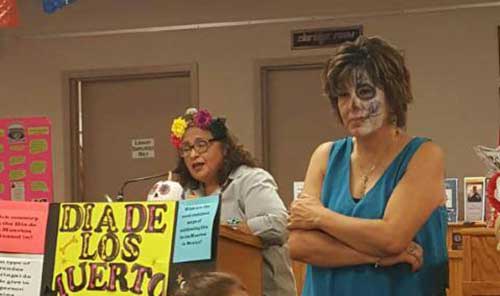 SAFFORD – It’s not every day that the Catrinas waltz and sugar skulls sit ready to be decorated. For those who didn’t know, Wednesday was Dia de Los Muertos or The Day of the Dead.

The celebration of the Day of the Dead was in full swing at the Safford-City Graham County Library on Wednesday night. There were crafts, face painting and a presentation by Eastern Arizona College’s historical dance troupe, the Danseries. Not only was there crafts and performances, but there was also an alter set up to display memories of deceased loved ones.

Sally Holguin is the library’s operations supervisor. She told Gila Valley Central that she was pleased with the celebration. However, Holguin did want to address the common misconception that the Dia de Los Muertos holiday was about death.

Photos were contributed by Salley Holguin.