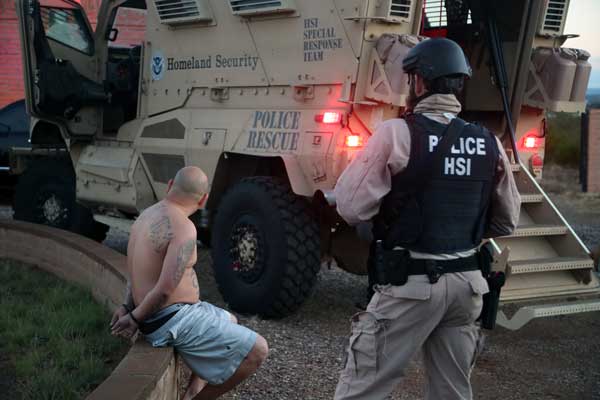 Photo By Charles Reed: A suspect is taken into custody by a HSI agent. He is believed to be part of a major heroin ring that transported and dealt drugs throughout Tucson and to states on the east coast.

More than 100 law enforcement personnel from a dozen federal, state and local agencies participated in the operation. Overall, investigators served a total of 32 state arrest warrants at 12 locations around the Tucson metropolitan area. Sixteen defendants are now in custody. Those arrested face state charges filed by the Arizona Attorney General’s Office, including racketeering, distribution of narcotics for sale, procession of narcotics for sale, use of wire and electronic communication in drug-related transactions and money laundering.

“HSI’s collaboration with our federal and local law enforcement partners continues to yield significant results in Tucson,” said Bradford A. Bench, interim special agent in charge of HSI Phoenix. “Individuals who conspire to flood our communities with dangerous and illicit drugs can expect to face serious consequences. One by one, we’ll seek you out, with the ultimate goal being to dismantle the entire criminal organization.”

“We are tirelessly investigating and prosecuting those suspected of bringing heroin and other dangerous drugs into our communities,” Arizona Attorney General Mark Brnovich said. “By joining forces with local, state and federal authorities, we will continue to take down major drug trafficking operators in Arizona.” 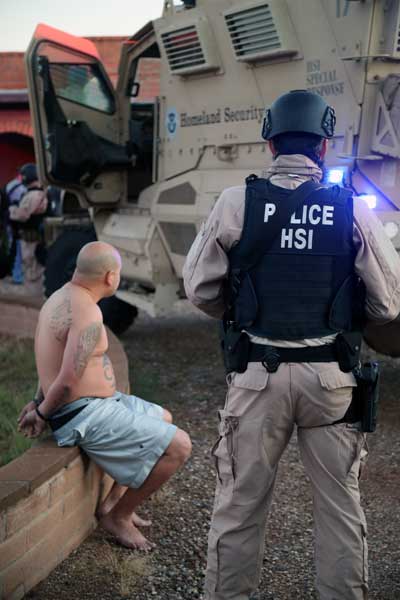 During Thursday’s enforcement actions, investigators seized approximately two pounds of heroin and two pounds of cocaine. Investigators also seized more than a half dozen vehicles, multiple computers and cell phones, along with several ledgers and scales.

“DEA and our partners have decimated this multi-state criminal organization responsible for trafficking heroin and laundering drug money,” said Doug Coleman, special agent in charge of DEA in Arizona. “Our collective efforts against criminals who exploit vulnerable citizens and those struggling with addiction will make our communities safer for all of the people we serve and protect.”

The investigation leading to the takedown began in August 2015 after HSI special agents received information that one of the individuals arrested Thursday, Sean Player Dixon, was involved in drug trafficking in the Tucson area. During the ensuing probe, investigators uncovered evidence allegedly linking the 42-year-old Tucson man to a drug trafficking ring responsible for dealing and transporting significant quantities of heroin and marijuana not only throughout the Tucson area, but also to several states on the East Coast.

Several of Dixon’s relatives are also charged in the case, including his wife, Pauline Dixon, 42, and his nephew, Terrence Gooden, 34, of Tucson. The other Tucson residents arrested for their alleged involvement in the trafficking ring are – Dixon’s nephew, Ricky Manning Jr., 35; his niece, Janeayi Manning-Qualls, 33; Raymond Pro, 39; Virgil Fleming, 45; Teresa Torres, 73; Ezekiel Jackson, 28; Robert Glaspie, Jr., 25; Enrique Estrada, 44; Andres Acedo, 36; Jennifer Ann Estrada, 38; and Rosalva Perez, 56. Authorities underscore the operation is still ongoing and several of the suspects being sought in the case remain at large.

“This was a collaborative effort with HSI and other federal partners in dismantling a large drug trafficking organization with ties to Pima County and other jurisdictions across the country,” Pima County Sheriff Chris Nanos said.

In addition to HSI, the DEA and the Pima County Sheriff’s Department, numerous other federal, state, and local law enforcement agencies participated in the investigation and/or Thursday’s enforcement actions. They include IRS-Criminal Investigation; U.S. Customs and Border Protection (CBP); CBP Border Patrol; the Tucson, South Tucson, and Sahuarita police departments; the FBI, the Bureau of Alcohol, Tobacco, Firearms and Explosives; ICE Enforcement and Removal Operations and the U.S. Marshals Service.