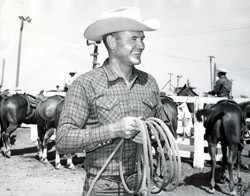 A World Champion Cowboy has just finished his last roping here on earth and is now having “The Rodeo” of his life.

Dale was born in Safford, AZ on Feb. 6, 1928, to Jim Smith and Winnie Smith. He lived in Safford until 1955, when he moved to Chandler, Arizona. While in Safford, he played football for Central Arizona College and was a top notch Junior Rodeo winner, which started his rodeo years. He married Barbara Joan Miller in 1947. Dale and Bobbie had 4 children, Vick Bryan(10-2-1950 to 2-25-1951), Grady Miller (wife Shannon), Michelle Janet (3-10-1955-2-6-2008) and Mark Dale.
Dale was one of the first flying cowboys, flying his own plane from rodeo to rodeo while family and friends hauled his horses.  His credits as a roper are numerous. Some of his highlights include:

In 1959, he went to the National Finals Rodeo in three events-team roping, tie-down roping and steer roping-becoming the first man in Pro Rodeo history to accomplish that feat.

Inducted into the Pro Rodeo Hall of Fame in 1979.

Inducted into the National Cowboy Hall of Fame in 1995.

In 2000, he received the Ben Johnson Memorial Award in Oklahoma. The annual award is presented to a living person who has been involved in the rodeo industry. The recipient must be someone who, like Ben Johnson, creates a positive image for rodeo and the Western lifestyle.

In 1976, Dale married Linda Sue Hayes and they had two children, Dawn Suzanne (husband PJ) and Dale Ward (wife Amanda). The ranching life in Arivaca was home to them for many years.

During Dale’s lifetime, he owned four ranches and ran them with great skill; keeping a lot of his information in his head, which at times caused some confusion. His first ranch, The Diamond Bar, was close to his parents ranch north of Kingman, AZ. The other ranches included the Lincoln Ranch, Flying X Ranch and the Arivaca Ranch. He still owns 40 acres of land in Brentwood, Calif. next to his great friend Jack Roddy. Ranching days were busy with new baby calves, branding, shipping and round up among the other ranch life responsibilities. The plane came in handy again, as he checked on each ranch often. Roping was still part of his life, with many held in Arivaca.

With the move to Standfield, AZ, his quarter horse racing career started.  Having a good eye for super stallions or great mares helped him win many breeding awards. His racehorses won many first places, second places and shows. Special horses that made his career were “Late to Bed”, “Sign John Doe” and “Prince of Cash”.  In 1996 Dale’s horse, “Sign It Super”, won the Marathon Handicap in Los Alamitos, Calif., running 870 yards in 44.51 seconds. With this win he was voted “Champion Distance Horse” of the year.

In 1999, Dale suffered a massive stroke and his days as a cowboy, rancher and racer came to an end. In 2000, Dale married Margaret Denise Goddard. “Marty” has two children David and Misty. Marty has been in Dale’s life since1984, standing by his side through sickness and health.

His brothers, Lot Smith and Roger Smith, plus many nieces and nephews survive him.

Dale was preceded in death by his parents; his brothers: Omer, Kent, Keith, Eldon, Max; his sister, Melva; son: Vick and daughter, Michelle.

The family would like to thank Dale’s special caretakers ,Natalie and Tony, for all their love and tremendous help over the years.

In lieu of flowers please send donations to: