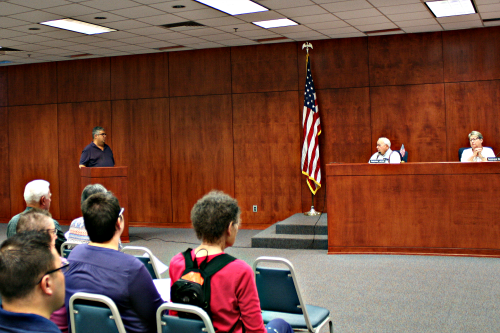 SAFFORD – The controversial topic of marijuana can illicit strong emotions in those for and against it. Those interested in expressing their opinions regarding the topic were invited to do so on Wednesday morning when the planning and zoning commission considered rezoning for a marijuana greenhouse.

Neal Brooks, president and founder of Growers Market Inc, stood before the Planning and Zoning Commission, requesting to transform his crop in Wilcox from tomatoes to medical marijuana. Brooks’ request to the commission was that Brooks would be able to change the zoning of his farm on 28250 South Brookerson Wilcox from agricultural to an unlimited manufacturing zoning. This unlimited manufacturing zoning is legally required for marijuana farmers.

Brooks told the commission and the attending public that tomato prices were falling from 40-50%. According to Brooks, the competition with Mexico has been too great for produce farmers to flourish. Without any processing facilities on site, Brooks said that there would be no smell and no selling of marijuana in the area. However, Brooks said that the marijuana business is growing and would be prosperous to the community.

“I am a businessman who has paid his dues to the community,” Brooks said. “It’s a crop, and right now it’s a very profitable crop.”

After Brooks gave his presentation, the pulpit was given to the public so that they were able to voice their opinion to the council. Of roughly 12 people who spoke, only one man was for the rezoning.  Jean-Paul Genet was the one individual who spoke for the rezoning. He told his story as a cancer survivor. Genet was diagnosed with terminal cancer and was treated with cannabis oil.

“Obviously I’m still here, the treatment worked,” Genet said. “I understand your trepidation, but the state does require very very strict regulations as far as security is concerned.”

Alissa Lines was one of the many who was against the rezoning. Lines stood before those attending and read her thoughts. Comparing the marijuana debate and the local hail storm and floods on October 9, Lines called for the community’s action against marijuana growers.

“We in Graham County have another storm upon us,” Lines said. “We have people and businesses who claim to care about our community, our health, and wellbeing as well as trying to build jobs and tax money for our county. They claim to care about helping others feel better, but at the same time, our state is facing the proposition to legalize marijuana. I fear that not necessarily this company, but many companies care about feeding addictions that tend to ravage and destroy the lives of individuals while they fill their bank accounts with profit.”

When the rezoning was put to a vote, two votes were for the rezoning while three were against. The commission vote was labeled unfavorable. Another meeting will be held before the Board of Supervisors for another vote on November 21 at 8:00am for a final discussion.