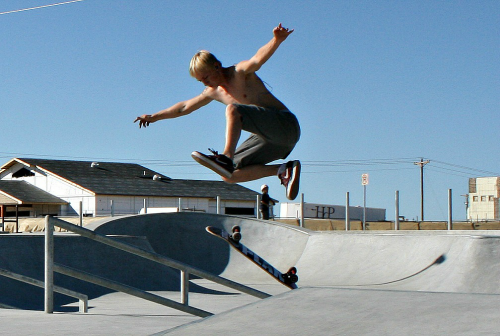 THATCHER – As of 9:30 am on Monday morning, the construction on the Thatcher skate park was officially complete.

Thatcher’s bowl-themed skatepark is located on Ballpark Road next to the other town amenities such as the splash pad, playground, and baseball field. According to Thatcher Town Manager Terry Hinton, the estimated cost of the materials for the park was roughly $75,000. This cost included a $16,000 design fee from Spohn Ranch Skateparks. However, instead of hiring an out of state contractor, Thatcher decided that the actual building of the park would be handled in-house.

On Monday’s Thatcher town council meeting, Town Manager Terry Hinton proclaimed the skatepark to be officially finished. However, the opening of Thatcher skatepark was not without its problems. Last week, the park had to be closed due to property damage and vandalism.

“I felt better about it this week than I did last week,” Hinton said. “The two things that absolutely will not be tolerated is foul language and smoking. If you choose to do that, and we pinpoint you, we will trespass you immediately if we can. If it gets too bad, I’ll shut it down like I did before for the knot heads that scratched their names in the cement and broke the spicket off.”

Thatcher Police Chief Shaffen Woods, who was present at the Thatcher council meeting, said that he and his department had been hesitant about the skatepark. But Woods also said that individuals should practice patience while attending the park.

“To be honest with you, we were really apprehensive,” Woods said.  “Some people get frustrated. They bring their little kids there, and there’s teens there. It’s a public park, were not going to chase the teens off.”

However, although the problems at the skatepark have been small, Hinton told the council that the city had taken a firmer stance.

“It’s easier to ease off than it is to toughen up,” Hinton said. “It’s better this week than last week. It’s starting to come around. The trash we see is getting less and less.”

Chief Woods told Gila Valley Central that there would be zero tolerance for any individual who chooses to violate the rules of the park.

“The park was built for everyone to enjoy.  There are no age requirements but it is asked that a parent or guardian be present with kids 10 and younger.  I would encourage all parents to be present when their kids are there.  I realize that probably won’t happen, however, if you’re concerned for your children safety or wellbeing, it would probably be best for you to be there with them,” Woods said. “If a situation is brought to the attention of the police department, we will do our best to resolve it.  We take great pride in our parks and are happy to be able to provide for some recreation to those who enjoy this type of activity.  We will not allow this park to become a location for delinquent or criminal behavior to thrive. We will be actively patrolling the area as well to ensure this park remains a safe place for all to enjoy.  We would ask that all park users take some responsibility and help us keep them clean and in good condition for others to enjoy as well. Please contact the Thatcher Police Department if you have any issues or concerns.  Additionally, if you haven’t been by the skate park, please drop by.  The town staff that built it did an amazing job!”