SAFFORD – The David M. Player Center for the Arts (CFA) will open its season with a sure-fire hit this Saturday as nationally touring comedian Ryan Hamilton brings his unique form of homespun observational comedy to Safford.

Hamilton has a string of comedy awards to his name and has appeared on multiple late-night talk shows, including The Late Show with Stephen Colbert, The Late, Late Show and Conan. After growing up in a small town in Idaho, Hamilton spread his comedy wings to places like Seattle and Boston before settling down in New York, where he is a regular at the Comedy Cellar. The venue boasts the likes of Louis C.K., Dave Attell, Colin Quinn and scores more have honed their craft there and return to spend a few minutes with the New York crowd to explore new material. That audience will have to wait a bit for Hamilton, however, as he will be in Safford for the second stop on his national tour. 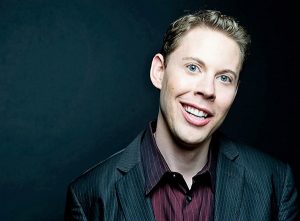 Hamilton recently told Gila Valley Central that he has had the comedy bug ever since he first began to write humorous columns in his youth.

“When I was really young, I used to write columns in the local papers here in Idaho,” Hamilton said. “I had my own little funny weekly columns that I really enjoyed, and that was the first place that I was like, trying to publicly be funny.”

While in college, Hamilton and some friends began performing on the school’s radio station as a way to continue to enjoy creating jokes.

“After I got out of college, I had more time and I just started to do it for fun,” Hamilton said. “(Initially it was) just the open mikes and then I started hosting the local shows and things like that and getting on stage whenever I could just to work on stuff just for fun. Then I decided to try to take it a little more seriously and jumped in and (said), ‘I’m just going to do this for a year and really push myself and really focus on it and see what happens.’ I just kept doing it another year and then another year.”

Hamilton honed his act in comedy clubs across the nation over the past decade-plus but has just recently branched out into performing at theaters, such as the CFA. He said he is excited to continue to craft his performance at the larger venues as he works his act for possible hour-long specials on premium cable or Netflix. Additionally, he is looking to explore into doing more acting on television and elsewhere.

“I would love to be able to keep going this direction doing theaters and having people who know who I am come out,” Hamilton said. “That sounds like an ideal career to me.”

Hamilton is known as a “clean” comic and his shows are safe for the whole family to attend. He plans on testing some new material on the Gila Valley crowd.

“I’ve got a lot of new stuff that I’ve been writing lately that I’m really excited about, and it will be really fun,” Hamilton said.

Tickets for the show are still available and can be purchased online at http://www.saffordcenterforthearts.com/exec/eHome.asp. If you are a comedy fan, be sure not to miss this one.

Clean comedy is coming to the Gila Valley