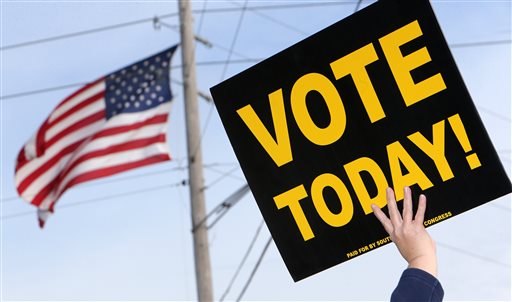 A woman waves a sign at passing motorists in Panama City, Fla., on Tuesday, Nov. 8, 2016. (Andrew Wardlow/News Herald via AP)

Election Day has arrived at last, and Americans are heading to the polls to have their say in the choice of the next president. Some paused to talk about their decisions and the tensions of the moment.

David Hansen identifies himself as a Republican. But when Hansen, 63, voted Tuesday morning at a church in the St. Paul, Minnesota suburb of Roseville, he rejected both major party candidates in favor of Libertarian Gary Johnson.

“Until more of us do that, nothing is going to change,” said Hansen, who is the chief financial officer at a small company and is the grandfather of four. “The Republicans are going to be far right and the Democrats are going to be far left… I couldn’t vote for either one of them.”

Hansen, who said he has voted Libertarian in the last few elections, said he has problems with both Clinton and Trump.

“It seems like Hillary trying to do what she’s been told she needs to do, and Trump, he just does whatever he wants to, and he’s not fit to be the president.”

At dawn Tuesday, dozens of voters lined up outside a polling station at a strip mall in Denham Springs, Louisiana. Back in August, Donald Trump visited this town after historic floods inundated neighborhoods with 10 feet of water, destroying 90 percent of local homes. Bill Smith, 59, said Trump’s visit confirmed his decision to back the candidate.

By showing up, Trump “really invigorated the people,” said Smith, sales manager at a car dealership. “His opponent, Hillary Clinton, didn’t bother to show up in the state of Louisiana.”

Even before the flood, though, Smith said his mind was made up.

“Easiest choice I’ve ever had to make because of his opponent. She should be in jail,” Smith said. “I just feel sorry for the Clintons from the standpoint that they simply have taken this country down the wrong path. I’m excited to see change in this country.”

Smith is confident Trump can unite the divided country.

And if Clinton is elected?

“Then we pray. We pray like crazy,” he said.

By the time polls opened at 6 a.m. Tuesday in Indianapolis, more than 90 people lined up in the chilly darkness outside the East 91st Christian Church, waiting to vote.

“I trust Hillary,” she said. “I don’t believe there’s anyone perfect in politics, that’s for sure. I think she’d make a better president, she’s more qualified.”

Like other voters at the church, Wires said she was relieved the campaign was finished.

“This has been the worst. I feel like this has been going on for a year,” Wires said. The divisions exposed by the campaign point to the need not just for healing, but for more voter education, she said.

“I think most people rely on what they hear on television and that’s it. You go to other countries, they understand their politics. I think we listen to the sound bites off of television, and we don’t really look at the big picture.”

Thomas Tillotson and Russ Van Deursen differed when they voted for president early Tuesday in Dixville Notch, New Hampshire, one of the first polling sites to open in the nation. But they were in solid agreement on one thing.

“It’s very exciting to be the first in the nation,” said Van Deursen.”Your vote is right out there in the small little hamlet that we have of seven or eight voters and it feels like you’re a real part of democracy.” He voted for Democrat Hillary Clinton because “our country needs to move forward and I didn’t believe that a presidency with (Republican) Donald Trump would move forward in a positive way.”

Polls in the town opened just after midnight closed as soon as everyone had voted.

“It’s an honor and privilege to be first and this is my 11th time doing it and it never gets boring,” said Tillotson, a 71-year-old business consultant who voted for Libertarian Gary Johnson. He said both major parties have “gone in directions that really don’t fit who I am and what I believe.”