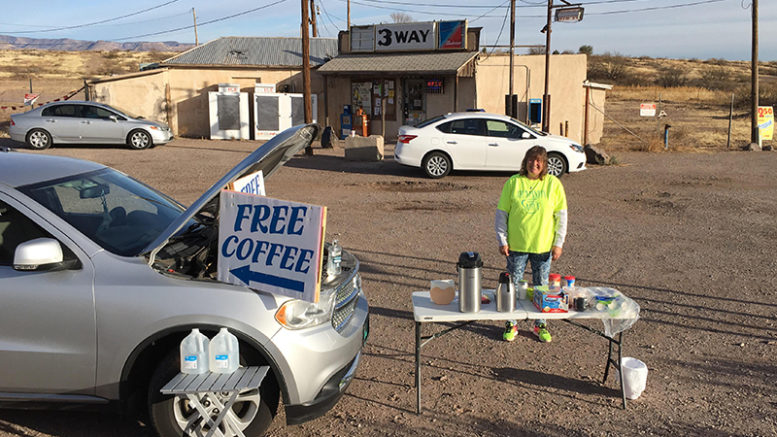 Contributed Photo/ Attissha Russom stands at one of her new location at the Three Way shop.

Clifton- Not everything can be solved with a cup of coffee and a listening ear, but sometimes it can make a big difference to those who need it.

Atisha Russom is the creator of Coffee on the Straight, giving out free coffee as well as caffeinated soft drinks to sleepy drivers on their commute from work. When Coffee on the Straight was first created, it was located at the turnoff for the Black Hills Back Byway. The coffee project has been ongoing since October of 2017. Despite the mass approval of the individuals who drive the long narrow straight between Clifton and Safford, Atisha Russom, the creator of Coffee on the Straight, was asked to leave by the Arizona Department of Transportation (ADOT) and the Bureau of Land Management (BLM) in November of 2017.

Now, Coffee on the Straight has returned, but to a new location in Cliffton and Three Way. In Clifton, Russom sets up her car with snacks, caffeinated drinks, and hot coffee in front of Life’s a Stitch Upholstery/UHaul from 6:00am-8:00am. The Clifton location is located at 566 North Coronado Blvd. In the afternoons, Russom is located in Three Way at the 3 Way Store and Station from 4:00 pm -8:00 pm. Although the hours are usually the same, Russom does not set up her car for coffee on Saturdays or Sundays.

Although people don’t stop as regularly as they did on the long stretch of highway between Safford and Three Way where she initially set up, Russom says they’re starting to recognize her. Averaging at roughly 10 stops a day, Russom told Gila Valley Central that people will start stopping more when she is there consistently.

“I was out sick several days so it’s like starting over. Once they see I’m there repeatedly then they start stopping,” Russom said.

Although Russom is grateful to the owners of the businesses who are letting her set up her free coffee stand on their property, she also feels somewhat lost.

“I feel like the Byway was the better location,” Russom said. “By better I mean it was needed so much more.”

Being new to the area of Cliffton and Three Way, and feeling a little lost in the situation, Russom told Gila Valley Central that she still deeply enjoys the work that she does. By giving out free coffee and waving to drivers as they pass, Russom still feels as if her actions are making a difference.

“It feels awesome. I have missed it so much,” Russom said. “The feeling that you’re making a difference is unlike any other.”

In October of 2017, Gila Valley Central asked what gave Russom the drive to stay beside a stretch of long highway and give coffee to strangers. Russom said two things urged her forward. The first would be that it is simply a good thing to do. Secondly, Russom said she had been deeply moved emotionally by the fatal accident which claimed the life of Angelica Monique Aranda, 21, of Safford on the 23 of September 2017.

On the morning of the tragic accident, Russom’s friends had thought that it had been Russom who had died in the horrendous wreck. Because Russom’s vehicle is so similar to that of Aranda’s, Russom’s friends were worried sick. Through frantic calls and messages, Russom was able to reassure her friends that she was not hurt in the accident that could have happened to anyone. But the emotional turmoil of her friends, and the horrible story of the accident moved Russom.

For now, Russom told Gila Valley Central she is enjoying the smiles and waves of people driving past.

“I get a lot of honks and waves,” Russom said. “The best is when you see people smile when they see you.”

On a comical note, local authorities were called to Russom’s aid when a driver thought she was in need of help. When the first police officer arrived, he told Russom that a motorist thought that Russom was in trouble but was too frightened to pull over. When a second officer arrived, he was smiling and laughing at the situation.

“The officer is laughing because they see me out there all the time and knew it was me but checked to be sure,” Russom said.

For now, there are very few plans of returning to the long stretch of highway between Safford and Three Way. Although she believes the better place for her to give out coffee is on The Straight, she hopes to help drowsy drivers where she is currently located. Russom told Gila Valley Central she’s grateful for what she has now, as well as the kindness of the people who have let her set up her coffee station.

“I truly appreciate all of the amazing support people have shown since I started back in October,” Russom said. “Also to thank you to Mr. Jake of Three Way and Ed and Patty Weiss of Life’s a Stitch Upholstery/UHaul. Both places allow me to use their electric so I don’t have to carry around the generator right now.”