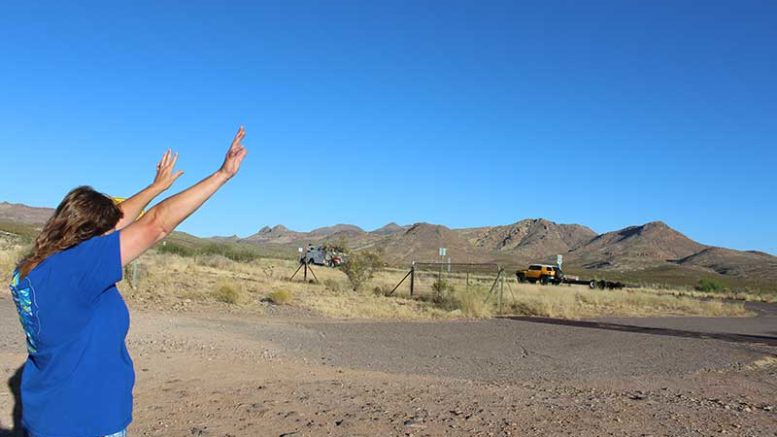 Brooke Curley File Photo/ Gila Valley Central: This Photo is of Atisha Russom as she greeted drivers while they were driving to and from work on the lonely stretch of U.S. Highway 191.

Asked to relocate by ADOT and BLM

SAFFORD – When she built it, the people came. But now, Coffee on the Straight has been asked to relocate.

Despite the mass approval of the individuals who drive the long narrow straight between Clifton and Safford, Atisha Russom, the creator of Coffee on the Straight, has been asked to leave by the Arizona Department of Transportation (ADOT) and the Bureau of Land Management (BLM).

Gila Valley Central caught up with Russom, who has vacated her small outcropping on U.S. Highway 191 North at the Black Hills Back Country Byway. For those who may not know, Russom created the Coffee on the Straight as a way to help sleepy drivers stay awake by giving away free caffeinated soft drinks, coffee, and snacks. Now, however, the BLM and ADOT have asked Russom to leave because she is considered a safety hazard, and is breaking 43 Code of Federal Regulations 8365.1-4. Because of the lack of a turning lane, and the high rate of speed in which individuals are driving, ADOT and the BLM consider individuals repeatedly turning in and out of the byway a hazard.

A disheartened Russom told Gila Valley Central that she has tried to stay at the central location on the straight, but a slew of obstacles have been thrown into her way.

“I started this out of the heartfelt desire to help. That’s it,” she said. “There was no other thought. I’m still just wanting to help. I am still looking for an area where I can (be) most beneficial. I have an offer in Clifton and an offer for 3-Way.”

Russom told Gila Valley Central that she first received word from ADOT and BLM, asking her to attend a meeting. At the meeting, Russom was commended for her hard work and selfless actions by both entities. However, she was also asked to leave the location of the byway within two weeks. According to Russom, she left the meeting in tears without saying that she would vacate. However, Russom later received a letter in the mail informing her of when she must vacate the site.

“Basically, BLM and ADOT said they wanted me to find another location,” Russom said. “They said I agreed to the two weeks they wanted me to do it in, which I didn’t. If I was in agreement why did I excuse myself from the meeting in tears when Bill Harmon said, and I’m paraphrasing, that there haven’t been enough deaths on the stretch of road between mile markers 130-144. I was extremely upset about their lack of value for life.”

After being visited by a BLM officer, Russom decided to vacate her post on the lonely stretch of highway. Russom told Gila Valley Central that the officer told her that if she didn’t vacate the next day, that she could be arrested.

“The officer that came out Friday night did say I could be arrested for trespassing because he said I agreed during the meeting,” Russom said. “No matter how many times I told him I didn’t agree to anything he insisted I did because the letter says I did.” 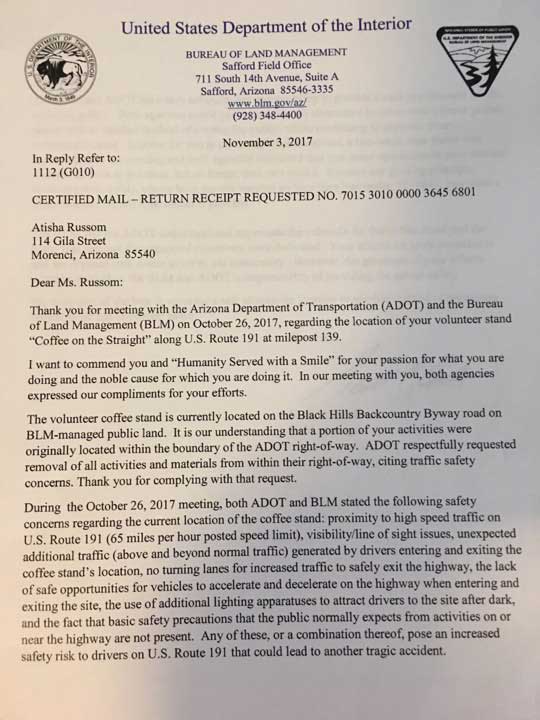 Contributed Photo/Courtesy Atisha Russom: This is a photo of the first part of the letter mailed to Russom from the BLM.

However as disheartened as she might be, Russom is still striving for change. Currently, Russom is looking into obtaining various insurance and permits in order to set up her coffee services alongside different roadside areas. However, the long stretch of highway called The Straight has not been forgotten. Russom has created a petition in an attempt to bring change to the highway, such as strategically place rumble strips, a rest area, and a turning lane. Russom’s petition can be found on thepetitionsite.com. To view the petition, click here.

According to her latest update Nov. 15, Russom posted that between the website and on paper she has collected roughly 800 names.

“What we see here is creating a hazard,” Lowery said. “As a matter of fact, our field manager, Scott Cooke, received a letter from ADOT stating that the activities in that area are creating a hazard for drivers. A lot of that stems from the speed limit on that road. The high rates of speed with no turn out create a hazard for traffic and could create accidents. We do commend her for what she’s doing. We think it’s an awesome thing. It’s just that that particular area is unsafe.”

When asked what would have happened if Russom had not vacated, Lowery said that the BLM officer would probably have not arrested her.

“As far as arresting her, that wouldn’t be our course of action,” she said. “What we would do is give her a citation for violating the CFR, and then if she continued to violate it then we would have to work with the assistant U.S. Attorney’s Office to issue another citation with a mandatory appearance. Then, if she was a no-show at that appearance, then we would have to get an order from the U.S. Attorney’s Office. But we really like what she’s doing and we wish the best for her and hope that she finds an adequate location.” 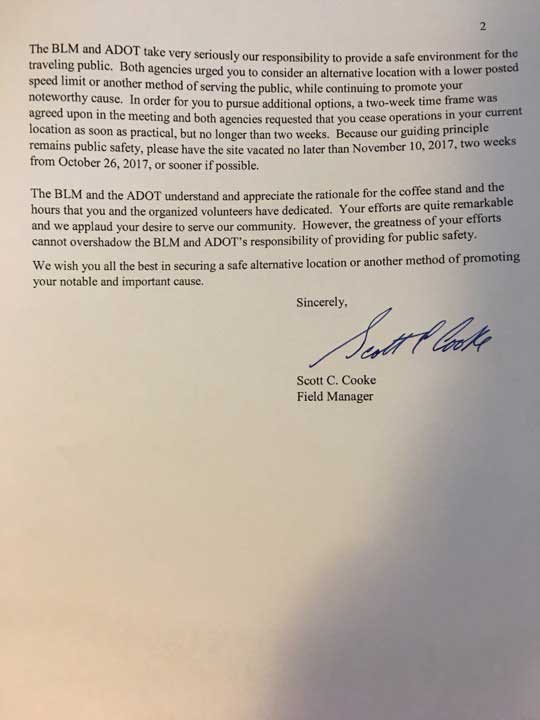 Contributed Photo/Courtesy Atisha Russom: This is a photo of the second part of a letter mailed to Russom by the BLM.

Gila Valley Central also contacted Bill Harmon, who is the Safford ADOT District Engineer. Although Harmon told Gila Valley Central that he was aware Russom had created a petition, he said he doubted it would make a difference because of ADOT’s construction schedule.

“We work on a five-year plan,” Harmon said. “We don’t have anything programmed out there for a while that would be a direct benefit for what they’re trying to do out there. Even with our maintenance sources we have limited opportunities to do certain things, but we also have to prioritize based on needs. We have service areas that have more pressing needs. Even if it’s for a nice cause, we have other types of situations that take a higher priority.”

Harmon told Gila Valley Central that the BLM and ADOT are primarily concerned with public safety where the Coffee on the Straight was located.  Also, Harmon said that ADOT believes Russom’s relocation to be a better option than any type of construction.

“The BLM has asked this group to leave the BLM property, and ADOT is also concerned about public safety out there,” Harmon said. “So, what we offered them was to work with the county, Greenlee County, and see if we could find a safer place for them. For us, that’s really the better alternative than trying to improve the location where they’re at.”(sic)

Russom told Gila Valley Central that after she receives the signatures, she plans to send them as well as photos and statements to the state representatives.

“They (Arizona State Representatives) are the ones with the power to make the changes we need,” Russom said. “Our lives matter and it’s about time ADOT realizes that. The BLM can’t be faulted for ADOT’s failure to provide safe roads for our travel, but they need to put the same care into the Graham County side of the byway that has been put into the Greenlee County side.”

If anyone is interested in contacting Russom they can reach her at  928-235-1862. Russom also has a Facebook public group called “Humanity Served With A Smile.” To visit the group, click here. 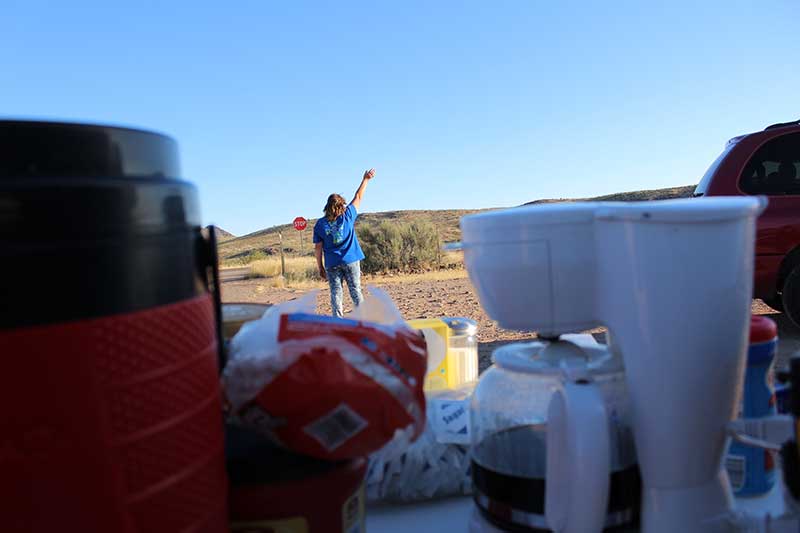 Brooke Curley File Photo/Gila Valley Central: Atisha Russom waves to drivers as they pass by on the road when Coffee on the Straight was still on location.