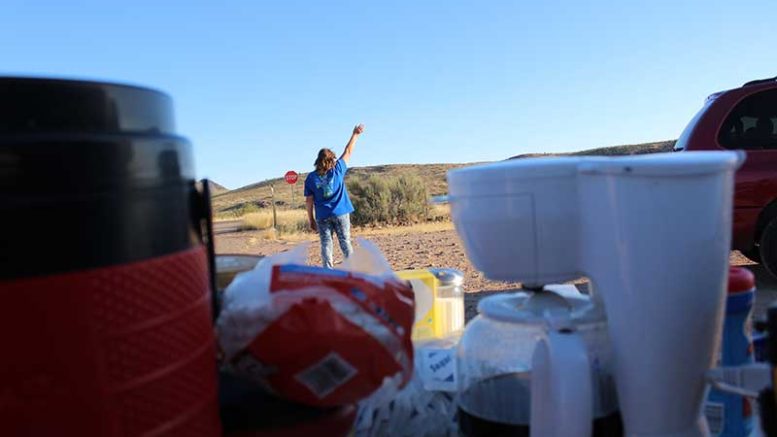 Brooke Curley Photo/ GIla Valley Central: Atisha Russom waves to drivers as they pass by on the road.

GREENLEE COUNTY – When faced with the cruelty of a world where sleepiness can claim multiple lives on a long drive home, two women decided to make a difference.

Atisha Russom is the creator of Coffee on the Straight, giving out free coffee as well as caffeinated soft drinks to sleepy drivers on their commute from work. Located at the turn off for the Black Hills Back Byway turnoff, Russom has been giving away the coffee since October 3. After only a week, Russom’s idea of free coffee has become wildly successful. At first, the money for her coffee came completely out of her own pocket. But now because of the gracious donations of drivers and their families, Coffee on the Straight is completely self-sufficient.

Russom attributes the success of the Coffee on the Straight to the people of the community, as well as the help of her friend Angel Stokes. Together, Russom and Stokes arrive at the turn-off around roughly 6:00 am daily, to give away coffee until 9:30 am. After returning home again for a break, Stokes and Russom return to the turn off the same day and sit with their coffee from 4:00 pm to 9:30 pm every day. 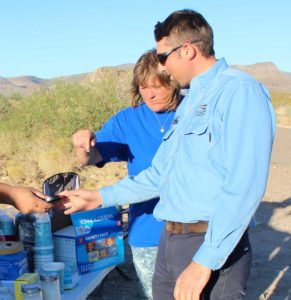 Gila Valley Central traveled to the lonely stretch of road where Russom and Stokes set up their table holding a coffee machine, creamers, and straws every day. In the afternoon sun, Russom stood out beside the road and waved as countless cars drove by while their drivers honked and waved. After only being beside the road for roughly a week, Russom obviously had impacted the lives of many individuals.

When asked what gives Russom the drive to stay beside a stretch of long highway and give coffee to strangers, Russom said two things urge her forward. The first would be that it is simply a good thing to do. Secondly, Russom said she had been deeply moved emotionally by the fatal accident which claimed the life of Angelica Monique Aranda, 21, of Safford on the 23 of September.

On the morning of the tragic accident, Russom’s friends had thought that it had been Russom who had died in the horrendous wreck. Because Russom’s vehicle is so similar to that of Aranda’s, Russom’s friends were worried sick. Through frantic calls and messages, Russom was able to reassure her friends that she was not hurt in the accident that could have happened to anyone. But the emotional turmoil of her friends, and horrible story of the accident moved Russom.

“There’s been a lot of wrecks on the road. But it just so happened that when that wreck happened, that my friend thought that I was involved in it. Because Ruban’s car looked like mine,” Rossom said.

“I just kept thinking about it, and that’s when I made the post about, “Too Tired to Drive Call for a Ride.” But you’re leaving it to somebody to call a stranger to give them a ride home,” Russom said. “It was then that it popped in my head, “Coffee on the Straight.” And it turned into this.” 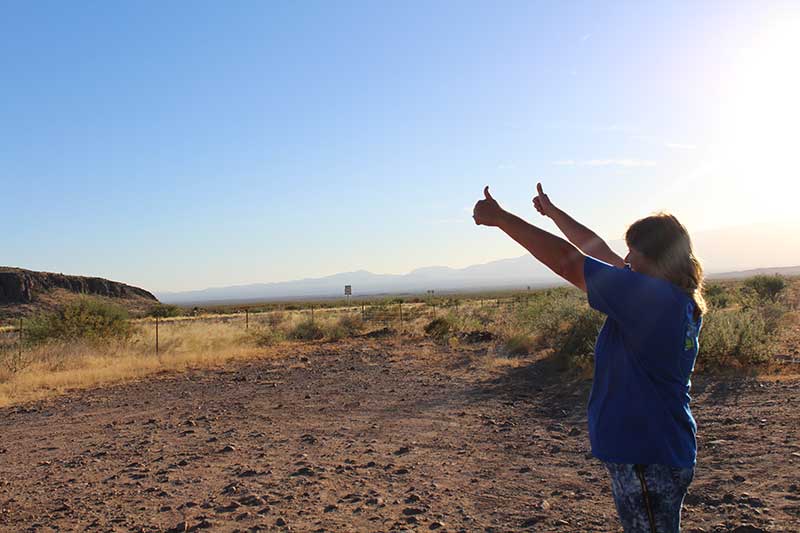 Since Russom’s idea of giving out coffee on the road, she has received a warm welcome from the community. The Morenci Fire Department donated a huge box of cups, two containers of coffee, and multiple other items. Bashas, Wal Mart, and Thriftees Food donated supplies. Russom said that she was amazed by the response of the community, and had not expected such an outpouring.

“I would have been happy with one person stopping to get a cup of coffee. Honestly, that’s all I expected. Just one person and I would have been good,” Russom said. “And it just blew up. It’s because of the community. I didn’t do this. I was just serving coffee.” 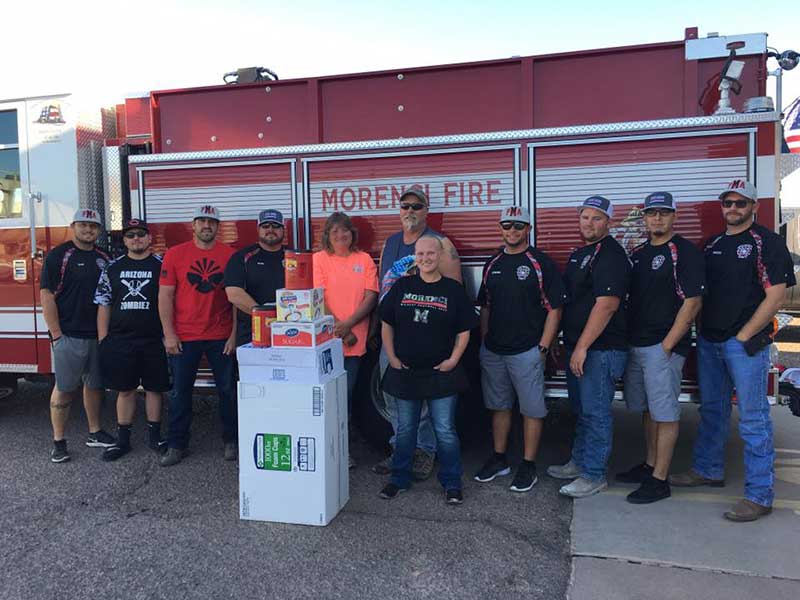 Contributed photo courtesy of Atisha Russom: The Coffee on the Straight group is given supplies by the The Morenci Fire Department.