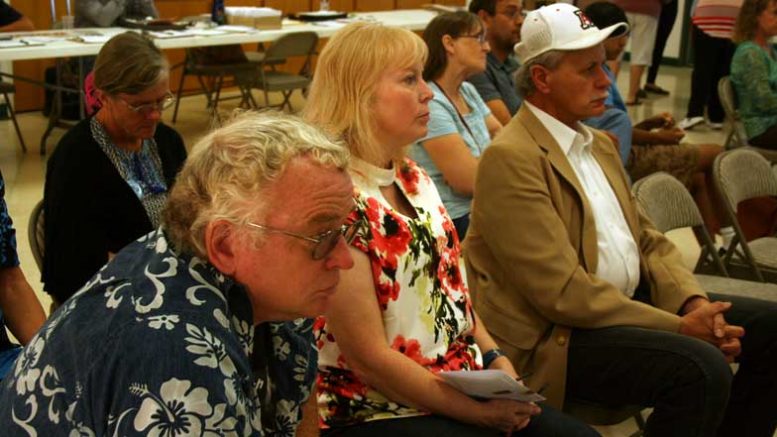 Photo By Gualterio Casias: David Hiatt, far left, Greenlee County Democratic Party Vice-Chair, and wife, Robi, listen intently to speakers at a Democratic state candidates forum at Sunsites on Oct. 22. Both said they liked what they heard from candidates who will run in the 2018 Democratic State Primary Election.

Why would the small community of Sunsites in northern Cochise County, population less than 1,000, host an event for top Democratic candidates for state office? Debbie Hickman, chair of the Cochise County Democratic Party explained that Democratic statewide candidates were anxious to learn the concerns of “really rural” Arizonans as well as to explain their vision for changing the face of government in Phoenix.

The event was held at the Sunsites Community Center on Sunday, Oct. 22

An audience of about 35 attended the forum. Along with those from Cochise, representatives from Greenlee County were also present. Candidate forums will be held in  Greenlee and Graham counties. No dates have yet been announced.

A candidate meet-and-greet was followed by a forum which involved candidates introducing themselves and responding to questions and answers from the audience. The candidates were in agreement on most issues, with concerns ranging from lack of funding for public education in Arizona; dismantling of programs intended to meet the unique needs of rural Arizonans and the lack of transparency among current Republican state officials. Also covered were water and tax issues that allow out-of-state corporations to get big tax breaks for locating in rural areas. After depleting the community’s water supply, these corporations leave for greener pastures.

Garcia informed the audience that he is a “product of Arizona public schools and is a U.S. Army veteran.”  He also has a doctorate in education from the University of Chicago. Garcia, who narrowly lost the race for State Supt. of Public Instruction in 2014, said as governor his priorities would include improving education, healthcare, and infrastructure. 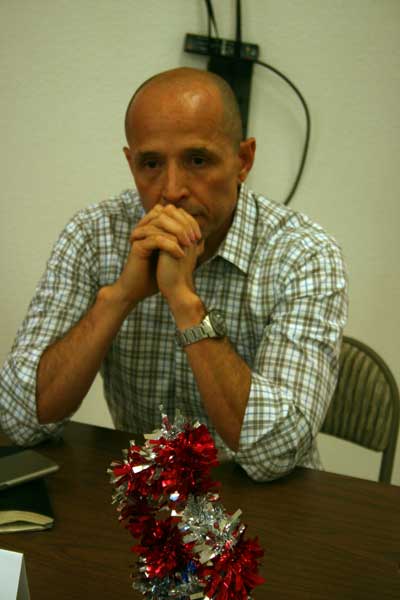 Photo By Gualterio Casias: David Garcia, who is running in the Democratic state Primary Election, listens to other candidates running for office in the primary. Garica is a U.S. Army veteran. He spoke at a Democratic state candidate forum in Sunset on Oct. 22.

Garcia commented that it was unacceptable that Governor Ducey has given sizable pay raises to his staff while teachers received a modest 1% raise, less than even the legislature recommended. Garcia commented that he is in favor of providing free community college tuition, as many states have started implementing. This would show that our leaders care about and are willing to invest in the future of Arizona. Garcia added that he would eliminate corporate tax giveaways and loopholes which are neglecting to help small businesses to ‘start, build and stay in Arizona.”

Attorney General candidate January Contreras decried the lack of interest in the concerns of everyday people by current A.G. Mark Brnovich. She went on to explain that when she worked in former A.G. Janet Napolitano’s office, “we were always out in the field, investigating nursing homes and crimes against children and other vulnerable populations.” Napolitano went on to become governor following her stint as A.G.

Contreras indicated that since working for Napolitano, she has initiated a non-profit which provides free legal services to the most vulnerable people in Arizona, including the homeless, abused children in the foster care system and elderly adults. Contreras commented that if elected, she would provide consumer protection with attention to rural areas which have largely been ignored by the state’s current administration. She said she would also work to return the A.G.’s office to one that is accountable to citizens rather than beholden to a “network of big-money donors.”

David Schapira revealed that he was a public school teacher in Arizona before becoming a state legislator for three terms in the House and two in the Senate. He said he was surprised when he was elected to discover that most Republican legislators were aware of what was going on in public education, but in fact were making “an intentional effort to dismantle public education in the state.”  He indicated that one former state senator, now a US Congressman, actually once told him that he didn’t believe the government should be in the business of educating children.

Schapira indicated that if elected as State Superintendent of Public Instruction, he would develop a campaign to take public education funding authority away from legislators with a plan to directly fund public schools through a system that is “sustainable, accountable and predictable in good or bad times.”

Candidate for Arizona Corporation Commission Kiana Sears decried corruption issues involving current ACC members “which affect everyone’s pocketbook”.  She indicated she has a strong background in water issues, having served as Water and Wastewater Executive Consultant for the ACC for several years. At that time, there were more than 20 renewable energy initiatives, all of which have been quashed by the current ACC elected officers.

Her highest priorities as ACC member would be to protect Arizona’s water supply and water rights, as well increase access to solar power other renewable energy resources. A Mesa Schools Board member, Sears commented that she felt “children and water are our most crucial assets in Arizona.” She concluded that there is a strong need to return the ACC to its original mission of utility watchdog rather than its current situation of “being in bed with the companies the commission is supposed to regulate.”

A.J. Flick represented Steve Farley, who will be running in the 2018 primary against David Garcia for governor. She indicated that Farley’s priorities are “properly funding kindergarten through college, implementing appropriate pay raises for teachers, providing affordable housing and improving infrastructure.”

Farley is a small business owner in Tucson and has served in the state legislature for the past 10 years. Flick pointed out that Farley is concerned that due to its reputation for having poor public schools, Arizona just lost two companies which would have provided 3,000 jobs had they decided to relocate to Arizona.  Farley is also reportedly concerned that the current Arizona Legislature currently gives away $13.5 billion dollars in state tax loopholes, money that could be going toward funding public education, infrastructure, and healthcare.

David Schapira also served as a representative for candidate Katie Hobbs, running for Secretary of State. He indicated that Hobbs’s current tenure in the state legislature has convinced her that more needs to be done to protect the rights of voters. Hobbs reportedly is concerned that current State School Superintendent Michelle Reagan has overseen a situation that has made voting more difficult, including providing late and misguided information to voters.

Candidates ended the forum by speaking with audience members at their booths, where petitions could be signed and “fives” ($5-dollar bills) were solicited for those candidates who are running through Clean Elections.