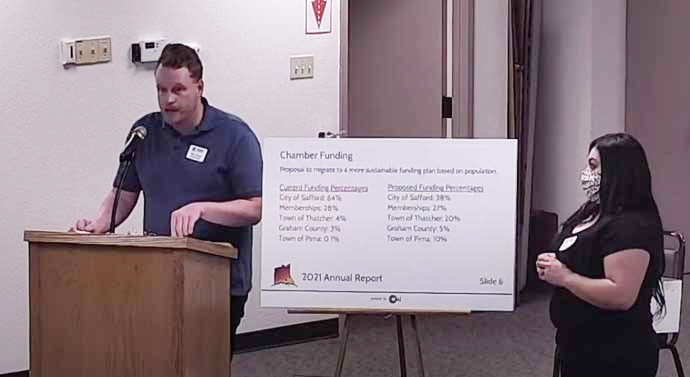 SAFFORD — The Graham County Chamber of Commerce is looking for a bigger buy-in from the towns of Thatcher and Pima.

“This more reliable funding program would keep us focused on keeping businesses open, rather than staying afloat ourselves,” Bryce said.

To warrant the increase in funding, the Chamber is proposing merchant organizations for Thatcher and Pima, similar to Safford’s Downtown Association.

However, if the towns don’t agree with a change in funding, Bryce said it would likely result in a reduction in Chamber staff, a reduction in the number of events and a change of focus for the Chamber.

“Without increased investment from the towns of Pima and Thatcher, the Chamber will have to limit our scope to serving the City of Safford, whose leadership stood to save the Chamber a few years ago, and has generously funded it ever since,” Bryce said.