In the summer of 1789, Benjamin Lincoln faced a delicate situation. He was the new federal customs collector in Boston – the first of 62 new federal customs collectors in the country. Lincoln and his collector colleagues were appointed after Congress passed a series of bills in July of that year, including a measure on July 31, 1789, that established the customs districts and personnel – the forerunner of the first agency of the United States, the Customs Service, which in turn, would become part of today’s U.S. Customs and Border Protection.

Lincoln knew the fledgling nation needed money (money that would go on to fund some of the most historic buys of the U.S., including the Louisiana Purchase, which basically doubled the size of the country at the time). But he also knew the former colonies had a propensity against taxes (after all, they had just fought a war of independence primarily over taxes). Writing the first Secretary of the Treasury Alexander Hamilton, Lincoln sought the right balance between collecting money without impacting commerce, or, as he put it at the time, avoiding enforcement of the new revenue laws so he didn’t “sour many of our best merchants and friends of the government.”

Lincoln, a Revolutionary War hero who had actually accepted the surrender of British commander Charles Cornwallis at the decisive battle of Yorktown, must have struck the right balance, as witnessed in another letter to Hamilton a few months later in late 1789. 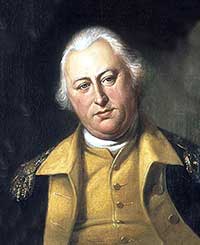 “The cheerfulness discovered by the merchants in general doing business at this Port in paying the established duties on merchandise evinces to me that the system is in general right and that the impost is not on the whole too high even for the first experiment,” he wrote to Hamilton, although he indicated there were some complaints about some of the duties imposed on wines. But overall, he seemed to trust that the tariffs that would come in the future would be sufficient for revenues without being too oppressive on commerce. “Under well constructed laws and a faithful execution of them I think it will not be difficult so to combine the operation of the impost & excise Laws as that they shall come in aid to each other and render the collection of the duties easy and certain.”

Two hundred thirty years later, the legacy of the job Lincoln started in 1789 continues with the current port director in Boston.

“A lot of things have changed since Maj. Gen. Lincoln was the collector, but the basic foundations of the job remain: the collecting of tariffs and taxes are still a primary part of what was the legacy Customs Service and is now part of U.S. Customs and Border Protection. The roots are still deeply there,” said Linda Brown, area port director in Boston. She added another thing in common with the port from Lincoln’s day is the quality of the people who work for America at this historic shipping place. “People look to join CBP because of the importance of the work we do.”

Obviously, some of the differences from 230 years ago include the ships being inspected – metal behemoths powered by great engines instead of the wooden, masted vessels that plied the oceans – as well as the cargoes they carry and the items attempted to be smuggled. But while there might not be the casks of whiskey attempting to avoid taxes, Brown said her officers still have to go down in the holds of ships, just as the early customs officers did, to poke around and see what’s there.

“The basic way that these inspections are done, I can’t imagine any differently. You board the ship either by gangway or by Jacob’s ladder, and I can’t imagine they did it any differently in those days,” she said, adding some items, such as fruits and vegetables, still come in today as they did two centuries ago, and CBP officers still work to stop smuggling. “The basic premise hasn’t changed. People still try to evade paying tariffs on textiles and things like that. Many of the things we run into today are the things encountered 230 years ago.”

And just like today, the customs officers were also tasked with keeping out anything that could hurt the nation.

The legacy continues not just in Boston, but in 328 ports of entry, as well as 135 Border Patrol stations within 20 sectors, 74 Air and Marine Operations locations, and more than 50 countries where CBP employees work internationally as well. It makes U.S. Customs and Border Protection – formed in 2003 after the merger of elements of the U.S. Customs Service, U.S. Border Patrol, the Immigration and Naturalization Service, and the Animal and Plant Health Inspection Service – one of the world’s largest law enforcement organizations. Its 60,000 employees are charged with keeping terrorists and their weapons out of the U.S. while facilitating lawful international travel and trade and taking a comprehensive approach to border management and control.

“Our specialists who work at our ports of entry and Centers of Excellence and Expertise– whether they’re ag specialists, or import, entry and drawback specialists – they’re at the forefront of keeping illegitimate trade out of the country, but also facilitating legitimate trade and protecting the revenue we’re supposed to collect,” said Thomas Overacker, the executive director for cargo and conveyance security within CBP’s Office of Field Operations.

Less visible to the public but also at the forefront are numerous attorneys, analysts, auditors, commodity specialists, and international trade specialists who combat illicit trade, facilitate legitimate trade, and protect the revenue. These employees work away from the ports of entry, and in conjunction with focused entities, such as the Centers of Excellence and Expertise.

Overacker added that when you consider what the revenues collected over the past 230 years have done for the country, it’s a pretty important legacy today. “It fills your chest with pride to know you’re part of an agency that has contributed so significantly to the history of our country and continuing that legacy and contributing today.”

It is true that CBP and its legacy U.S. Customs Service had an early and rich history of enforcing significant national policy, exemplified most notably by the enforcement of President Thomas Jefferson’s embargo on trade with Britain in 1807, and President Andrew Jackson’s response to South Carolina’s efforts to nullify national tariffs in 1828 and 1832. This national prominence would continue throughout the post-Civil War period as the country industrialized and international trade grew to keep pace, through enforcement of the Volstead Act during Prohibition, and through the enforcement of export restrictions during World War II.

“We are also the origin of several well-known entities today, whether it is the U.S. Coast Guard, the Immigration and Naturalization Service – now part of Immigration and Customs Enforcement – the Public Health Service, or the Bureau of the Census,” noted Brenda Smith, Executive Assistant Commissioner for the Office of Trade.

When CBP was formed in 2003, the antiterrorism mission became priority one, and rightly so. In response to the terrorist attacks on Sept. 11, 2001, the National Targeting Center, which identifies high-risk cargo, the Customs Trade Partnership Against Terrorism, and the Container Security Initiative were already up and running when CBP was formed. But revenue collection is still an important aspect of the job as CBP processes more than $2.6 trillion in imported goods each year.

“The Homeland Security Act of 2002, which created CBP, stated unequivocally that those traditional revenue functions must be maintained,” Overacker said, quoting the act: CBP “may not consolidate, discontinue or diminish those functions.”

He also pointed to recent trade remedies against China and antidumping/countervailing duty actions CBP enforces every day at its hundreds of ports of entry and beyond, using tools such as the Centers for Excellence and Expertise, investigative techniques to detect evasion, and data analytical tools to be more efficient and more effective than their predecessors in the early days of the nation.

“We have long been at the forefront of using technology and partnerships to improve processes and facilitate trade,” Smith said. “In 1969, our ports of entry used an early computer network, known as CADPIN, that freed officers up from using paper lookout lists. Fast forward to today, and we have the Automated Commercial Environment, which is the sole database through which all goods are entered and admitted into the United States. The modernization we have achieved in recent decades, on the scale that we have, has been remarkable.”

But it all comes back to the earliest form of CBP on the Atlantic Ocean when Customs collectors started in those 13 former colonies. “The mission continues, and despite the reorganization and creation of a unified border agency, this part of the mission has always been there,” Overacker said.

Brown is a 27-year veteran of CBP and a legacy employee herself of the old U.S. Customs Service. She takes great pride in the work they do in Boston, as well as being part of the line that started with one of the first Customs collectors, Benjamin Lincoln.

“He was certainly a man who embraced the values of our country and the Constitution of the United States, and that certainly speaks to his desire to be in the position of customs collector,” she said. “Employees now take the job for the same reason. They take that oath of office to support and defend the Constitution to heart. To follow in the footsteps of a man who lived that through all of his actions is a great thing.”