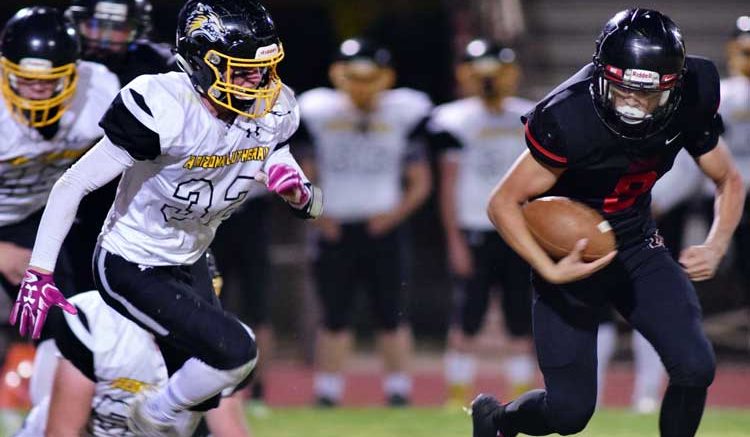 Photo By Raymundo Frasquillo: Steven Chavarria takes off on a 65-yard TD to break an 8-8 tie. Morenci was victorious in its open round playoff game against Arizona Lutheran Academy, 27-17.

Moves on to face No. 1 Round Valley in Eager

MORENCI – It was Americana at its finest. On a crisp Fall night, the working-class public school No. 8 Morenci Wildcats (8-3 conference, 8-3 overall) took on the private school from the big city, No. 9 Phoenix Arizona Lutheran Academy Coyotes (7-4 conference, 7-4 overall) in a game that went back and forth throughout. With the faithful bringing the 12th Man to the game and cheering on their squad, the band blaring and the home play-by-play announcer encouraging the fans to be heard, the Wildcats showed why Coyotes shouldn’t attack them in their own house and prevailed in thrilling fashion, 27-17. 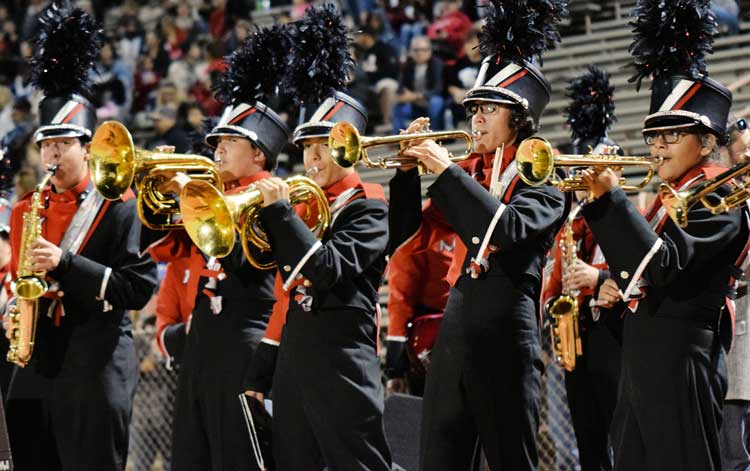 Photo By Raymundo Frasquillo: The band was integral in hyping the 12th Man at the game.

The Wildcats utilized a lockdown defense and its ground game to win smash-mouth style, gaining five yards a quip, manipulating the clock and wearing down the Coyotes just enough to hit them with the big play just when Morenci needed it.

“Our past three games we had two shutouts,” he said. “We shutout Miami, turned around and shutout a really good Pima team, and then here with these guys and the type of offense that they play it’s really hard to just grind and keep those guys (from scoring.) Our defense was ready. They were up for the task . . . We had to be very disciplined as far as our defense went.” 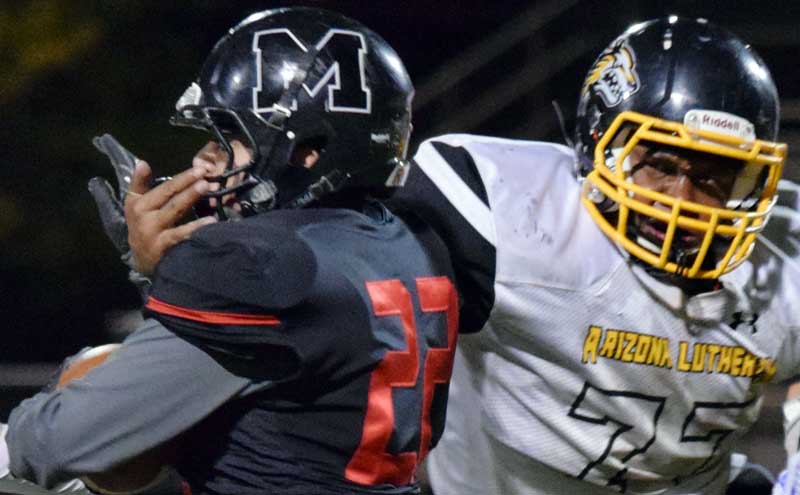 Quarterback Nico Carrasco only threw the ball twice all night and neither were close to a completion. But Carrasco led his team brilliantly, scored twice (once on a run and once on a 78-yard kick off return) and set the tone on defense. He also didn’t throw the biggest toss of the night – more on that later.

“Nico Carrasco, that guy is incredible,” Gallegos said. “He’s our quarterback and then he’s our general on defense. If you would ever ask for a senior leader – if you would look that up in the dictionary there would be a picture of Nico Carrasco.”

At the heart of the offensive line was big number 70 Isaiah Sanchez, who pancaked defenders all night, blowing open big holes for his running backs. Sanchez was also influential on defense, plugging up holes and taking running backs to the ground.

“It’s a team sport,” Sanchez said. “You can’t do it on your own. I’m just really proud of my brothers in the battlefield. That’s all it is. You gotta go out there and give it your all. If you don’t, then you’re just going to lose.” 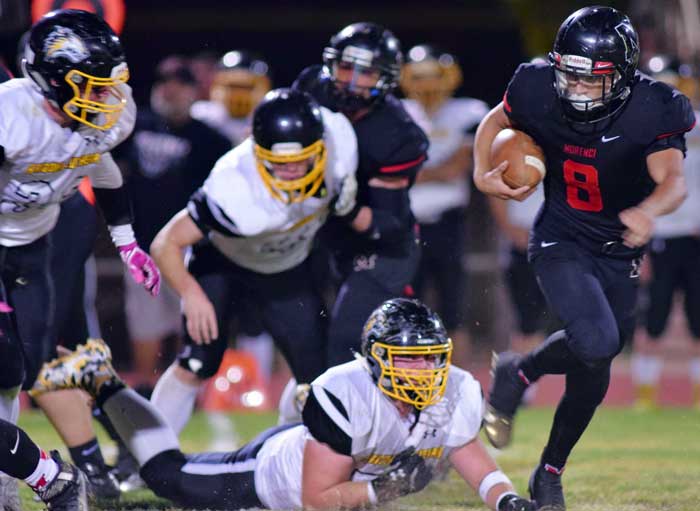 Photo By Raymundo Frasquillo: Steven Chavarria makes his way around the left side for a big gain.

A well-played game with only a few flags here and there, neither team committed a traditional turnover the first three quarters. But there’s a reason why they play four quarters, and ultimately it was a fumble (although not lost) and an interception that sealed the Coyotes’ fate.

“Morenci came out and they hit us, and we knew they were going to,” said Arizona Lutheran Academy head coach David Peter. “They made some great adjustments to our double wing and kind of stymied that, so we went away from our double wing a bit and ran just straight up full house stuff in I (formation) and had a little bit more success in that.” 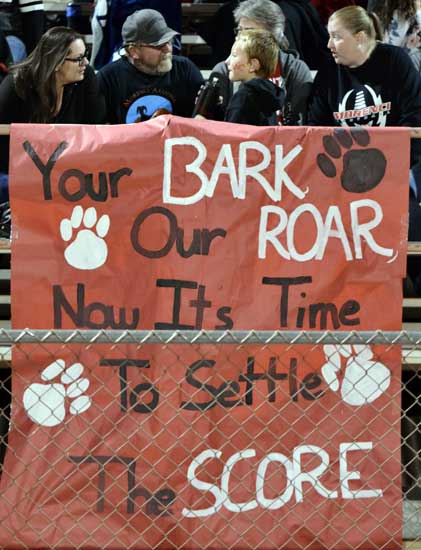 After forcing the Coyotes into a three and out on their first possession, the Wildcats were moving the ball well and were set up in the red zone after Steven Chavarria’s apparent run down to the 9-yard line. The run was called back for a chop block, however, and Morenci eventually was forced to punt.

Arizona Lutheran then drew first blood with a bit of trickery as Brandon Garcia took a delayed handoff on third down and 8 and went 72 yards down Main Street to pay dirt. The 2-point conversion was good and the Coyotes were up early, 8-0.

Then it was Morenci’s turn to methodically work the ball down the field with runs of 5, 6, 8, or 9 yards at a time. The drive paid off with quarterback Nico Carrasco plunging it in from 2-yards. With the good 2-point conversion the teams were knotted up at 8 each.

With each team chewing clock, they both only had five possessions in the first half, with Morenci just getting its fifth possession at the end of the second quarter.

As the second quarter was coming to an end, Arizona Lutheran was driving and quarterback Nick Naber hit Garcia and Jamie Heyn on passes to bring the ball to Morenci’s 5-yard line. 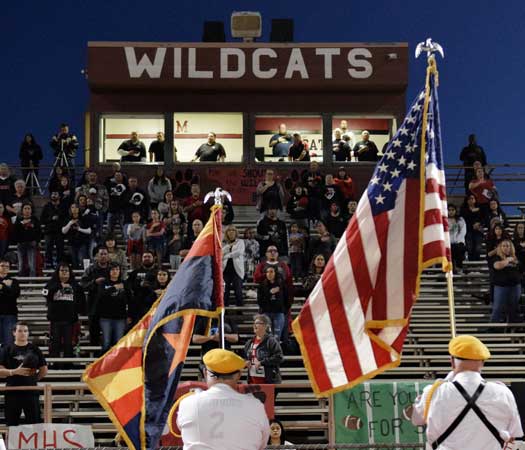 The bend-but-don’t-break defense then buckled up with just 34 seconds left in the half and the Coyotes had three straight incomplete passes. Arizona Lutheran then trotted out its field goal kicker to take the lead, but he missed wide right and the teams went into halftime 8-8.

Things then heated up in the second half.

The Coyotes’ kickoff went out of bounds, giving the Wildcats good starting field position at the 35. On the first play from scrimmage in the second half, Chavarria burst out and sprinted 65 yards down the sideline to break the tie. Morenci opted to kick the extra point, and the successful try gave them a 15-8 lead.

After the teams traded punts, Arizona Lutheran went back to its run attack, which had been mostly stifled by gang tackling by Morenci, and worked its way down the field. The effort was rewarded when Garcia battled his way for a 15-yard TD. However, Sanchez gobbled up Garcia on the 2-point conversion attempt and Morenci still held the lead, 15-14.

Then that darn delayed draw trick play got the Wildcats again and Garcia scampered 51 yards down to the Wildcats’ 9-yard line.

Morenci’s goal line defense held Arizona Lutheran out of the end zone yet again, but this time the field goal attempt was good and the Coyotes went up, 17-14 with just under 7 minutes left in the game.

Photo By Raymundo Frasquillo: Arizona Lutheran junior Jamie Heyn missed a 23-yard first-half field goal attempt with 22 seconds. The score remained tied 8-8. He made a 20-yard second-half attempt which gave the Coyotes a brief 17-15 advantage with 6:57 left in the fourth quarter.

With their backs to the wall, the Wildcats immediately answered the call again as Carrasco took the ensuing kickoff on a bounce at the 22 and raced 78 yards to the deafening sounds of the fans erupting. Morenci went up 21-17, but it would need its defense to stand tall once again.

On fourth down and 3 from the Morenci 45-yard line, Garcia bobbled the handoff and by the time he scooped up the fumble a plethora of Wildcats were upon him, stopping him for a loss and forcing the turnover on downs.

“That fourth down fumble – that was a dumb two play calls on my part (that) put us in that position,” Peter said. “Yeah, a fumble happened, but honestly, we shouldn’t have been in that position. I should have done something differently the play before.” 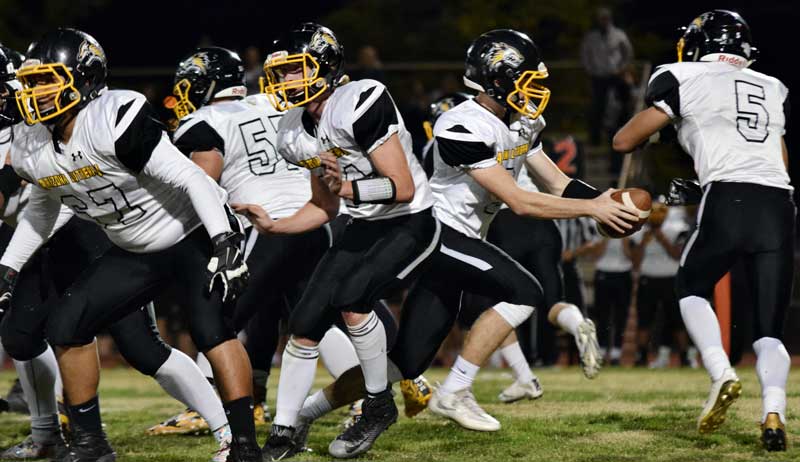 Photo By Raymundo Frasquillo: Arizona Lutheran junior running back Brandon Garcia (5) takes the handoff for a 72-yard touchdown on 3rd-and-8, capping an 81-yard drive in six plays using 2:28 on the second possession.

Chavarria then pounced on the defense’s momentum and zipped about 20 yards down to the Coyotes’ 30-yard line.

After a couple of plays, the Wildcats found themselves at a turning point facing fourth down and 10 from the 30. 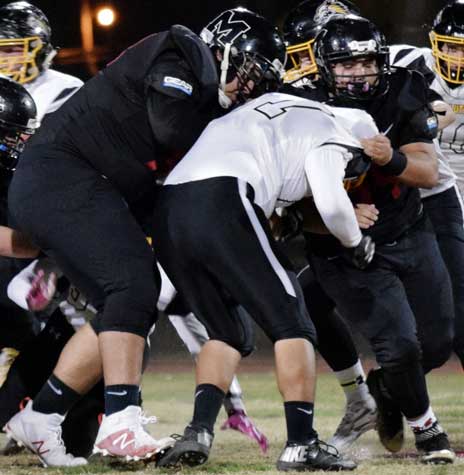 “We figured if we punt the ball and it goes into the end zone we are only giving up 10 yards, so (we) might as well just go for it and let them start at the 30 in the worst-case scenario.”

Well, it tuned out to be the best-case scenario for the Wildcats.

Mark Roybal took the pitch from Carrasco and as he bounded around the right side a gang of Coyotes was waiting to stuff him and turn the ball over. But Roybal wasn’t interested in running. Just before getting hit, he reached back and tossed a high floater deep downfield as Tito Casillas was running stride-for-stride with the Coyotes’ defensive back. With great coverage, there was no separation between the two and as they went up for the ball it was tipped and seemingly knocked down for an incomplete pass. Casillas managed to stay focused and snag the ball and cradle it in his arms before hitting the ground, however, and Morenci went up 27-17 on one of the biggest plays of the night.

“That was an incredible catch,” Gallegos said. “We told him, ‘hey, this is your moment’ and sure enough he came through.” 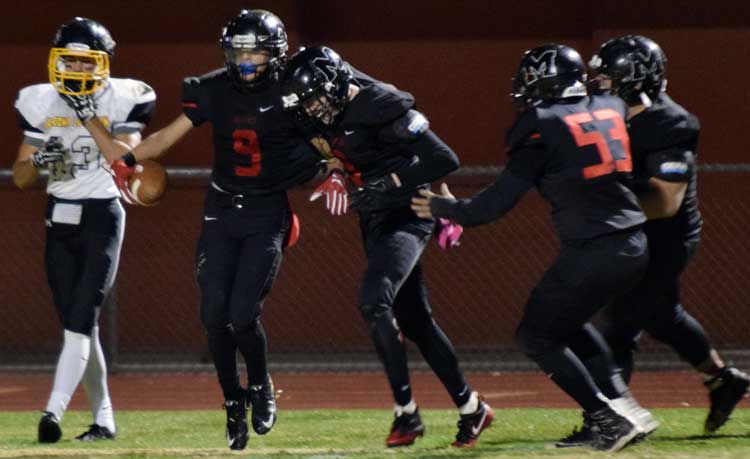 To cap off the evening, Roybal then intercepted Naber and took it back all the way to the Coyotes’ 5-yard line. The run was called back for a personal foul on a punishing crackback block that leveled Tyson Biciolis of Arizona Lutheran, but the damage was done and Morenci ran out the clock to win, 27-17.

“We kind of shot ourselves in the foot here and there and they took advantage of a few mistakes on our part,” Peter said. “That tip play right at the end – the ball just bounces that way, unfortunately. Congratulations to them, and, unfortunately, we’re saying bye to seven seniors and the young guys have a learning experience and so do us, coaches.” 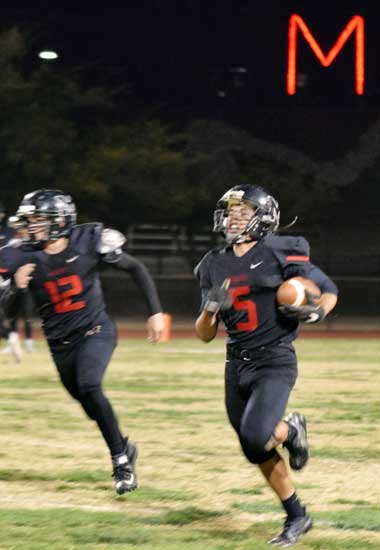 Photo By Raymundo Frasquillo: Junior Mark Roybal intercepted a pass, returning it for a long gain, but a penalty negated the run with 1:33 left to play.

In other local playoff action: