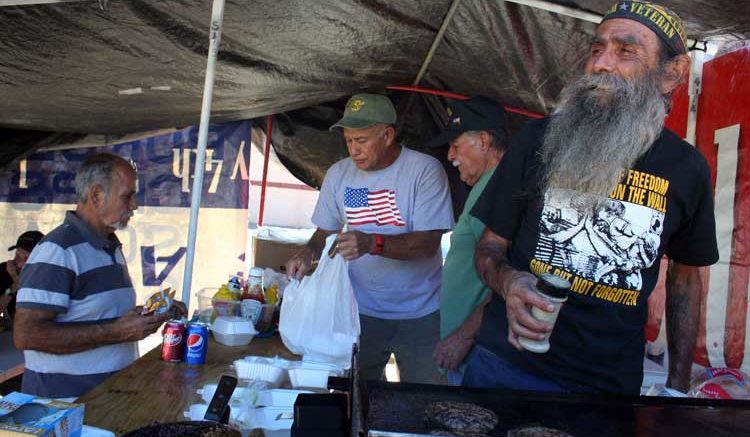 For some, event was like a homecoming
By Gualterio Casias

CLIFTON – Veterans Day 2017  was relatively quiet in Clifton-Morenci. That, however, did not apply to Veterans Park in Clifton. The scene at the park was quite active as several people came and went. Their goal was to acquire hamburgers being sold by the Mares Bluff Veterans Memorial Committee.

Some bought a single burger while most ordered as many as six or seven.  The committee’s plan had been to sell burgers until 5 p.m. That did not happen. By 2 p.m. all burgers were sold out.

Photo By Raymundo Frasquillo: The event was held at Veterans Park.

Not everybody who participated in the event paid the $6 for a burger, chips and a soft drink. Everything was free for those who are veterans of the U.S. Armed Forces. Of the 130 hamburgers cooked, about 50 were given to vets, most of whom are local.

Four Vietnam War veterans were key in setting up and making the hamburgers available. They were Joe Nafarrate, Armando Carrillo, Steve Guzzo and Bob Jackson. Guzzo, a retiree who did the cooking, was for many years the cook for Maud’s, a diner long-operated and owned by the Guzzo family. Maud’s was a local landmark best known for its burgers, burros and especially for its fish and chips.

One longtime Clifton resident who was a regular at Maud’s said, “Steve has definitely not lost his touch. Man, these burgers are absolutely delicious.” 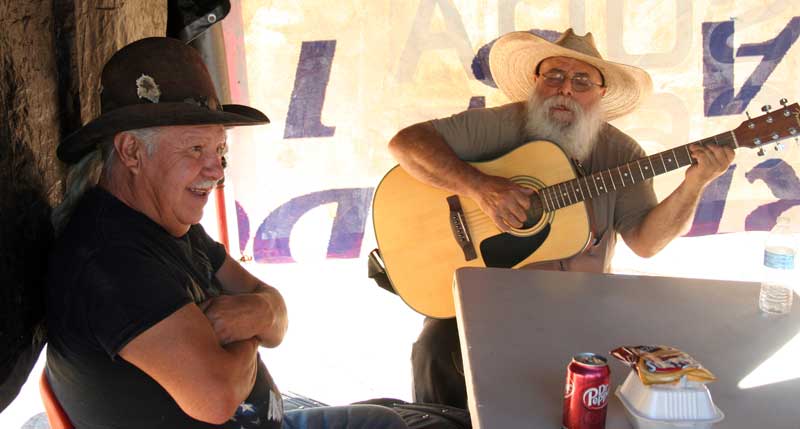 Photo By Gualterio Casias: Local singing legend Johnny “Rodriguez” Saiz enjoys listening to Manuel Gomez as he plays Saiz’s guitar and softly sings. It was part of the friendship and camaraderie at a 2017 Veterans Day event sponsored by the Mares Bluff Veterans Memorial Committee. Vietnam War veterans Armando Carrillo, Joe Nafarrate, Steve Guzzo and Robert Jackson set up the shades to provide shelter from the sun.

Carrillo and Nafarrate handled packaging the burgers and handed them to customers. Jackson assisted in setting up the canopy that provided shelter from the sun for the Bluff crew and for customers. It was, after all, a very warm and sunny day.

Among customers were those who have lived elsewhere for many years. Some said that for them the hamburger fry represented something of a “homecoming.”  They visited with people they had not seen in a very long time. To them, Guzzo, Nafarrate, and Carrillo were among the very familiar faces.

Another familiar figure was musician Johnny “Rodriguez” Saiz, known for his singing and excellent guitar playing. Saiz’s voice hs at times been referred as being quite similar to country music legend Johnny Rodriguez. One might say Saiz is something of a special attraction at the Bluff Committee’s bi-weekly hamburger sales events. He is also known for his gentle humor and charm.

After Saiz put his guitar down on a table local to take a break, resident Manuel Gomez received Saiz’s permission to play his guitar. Gomez sang softly for the next half hour.

Jenny McCluskey and Holly McCluskey ordered several hamburgers for their families. They did not seem the least bit impatient as Guzzo finished cooking burgers for several previous orders. When their food was ready, the McCluskeys walked with bags full to a picnic table where their families were waiting.  Theirs was the “Marine Corps” table that was well-shaded by a tree. 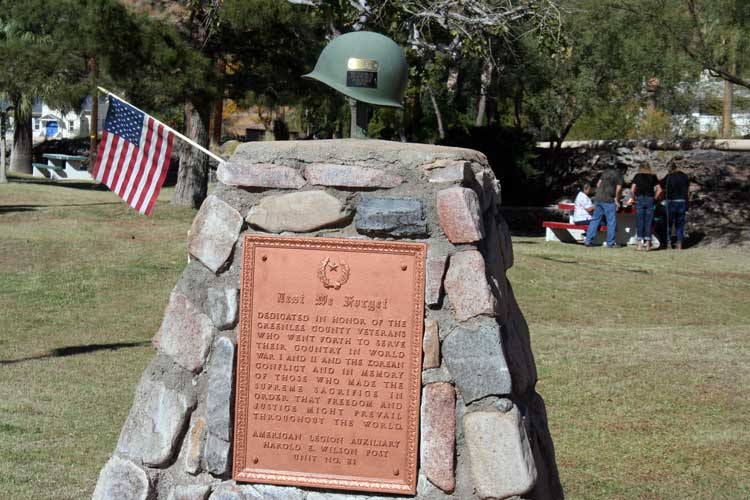 Photo By Gualterio Casias: Veterans Park in Clifton has seen many recent improvements made by the Mares Bluff Veterans Memorial Committee. Among them are the park’s cement tables, which committee members have cleaned up and painted. At right, the Jenny and Holly McCluskey families make use of a table on 2017 Veterans Day. They are eating “Bluff Burgers” prepared by local veterans who served in the Vietnam War and are committee members. In the foreground is a veterans’ memorial topped by a World War II-era helmet. It belonged to local veteran Emilio Membrilla, who saw action in the famous Battle of the Bulge.

The Marine Corps table is one of four concrete picnic tables in the park that have recently been refurbished by the Mares Bluff Committee. Each one is dedicated to the U.S. Navy, Air Force, Army, and Marines. The Bluff crew sanded and cleaned each table top. The names of each service were painted on the table tops. The benches and rims of the tables are also painted with that service’s standard color. The Army table is green, Air Force blue, Marine Corps red and Navy dark blue.

The Bluff Committee sells hamburgers at Veterans Park every other Thursday. Money made by the Bluff hamburger sales is used to replace flags atop windy Mares Bluff. They include the U.S. and Arizona flags, along with those representing World War II, Korean, Vietnam, Iraq-Afghanistan and Prisoners of War. The flags are torn and tattered by the wind and need replacement at least every two months.

The committee also engages in civic events such as providing scholarships for Duncan and Morenci high schools.

A spokesman for the committee expressed gratitude to the Town of Clifton, which owns the park, in working with veterans to improve the park and allow the group to sell hamburgers there. “We have had some very good cooperation from the town in recognizing and honoring veterans with the park,” the spokesman said.