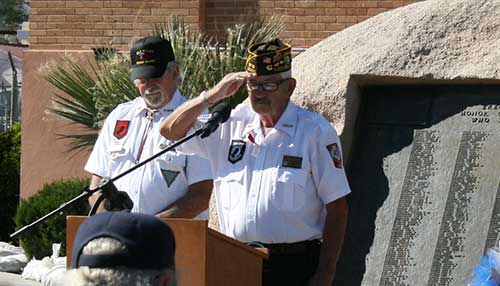 SAFFORD – On the steps of the Graham County Courthouse, the community banded together to honor its veterans.

The ceremony started exactly at 11 a.m, this Friday on Veterans Day as the American Legion and the Veterans of Foreign Wars Auxiliary (VFWA) members gathered together with the public for a ceremony filled with music and heartfelt thanks. Music was provided by the group, Tribute, and Safford Mayor Chris Gibbs spoke, along with leading members of the American Legion and the VFWA. 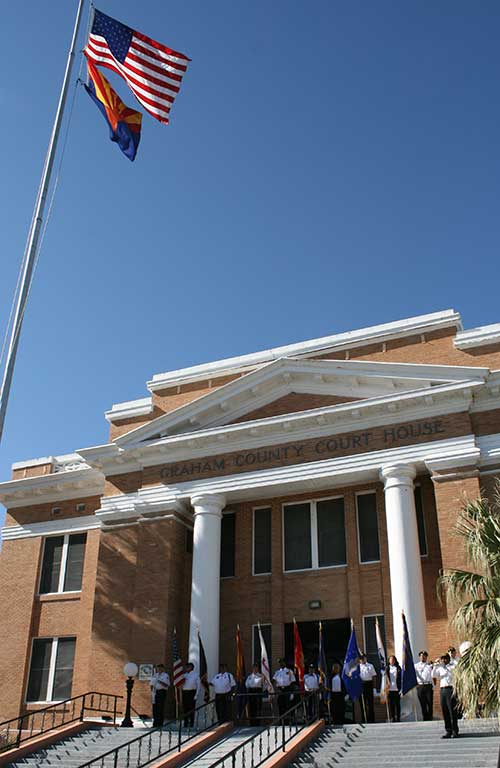 Brooke Curley Photo/Gila Valley Central: The Gila Valley Honor Guard members provided a rifle salute while the bugler played at the raising of the flag.

The Gila Valley Honor Guard members provided a rifle salute while the bugler played “Taps” at the raising of the flag. Later in the ceremony, Tribute sang the official songs of each branch of the military as the veterans of each branch stood while attendees applauded.

In his remarks, Gibbs gave the attending audience a small history of Veterans Day. He followed this brief history by telling the attendees how much he appreciated those who served, and recalling how he had to send his wife to Bosnia. Gibbs said he was proud of his wife when she returned home.

“The other thing we sometimes fail to mention is the family,” Gibbs said. “The celebration of Veterans Day should also celebrate the family of veterans. I had to send my wife with a .45 and an M-16 and a flak jacket to Bosnia – the mother of my children. And so, as those who lived through it and served our country honorably, we have an obligation to remember each other and those who didn’t return. I’m very proud to be a 23-year veteran. My wife is a 30-year veteran, and we love America.”

Gibbs told those attending that this speech would probably be his last and that he wanted to reiterate the importance of every veteran’s service.

“I just want to tell you veterans how important your contribution has been to America,” he said. “We each feel that pride, but sometimes we have to be reminded. As my last speech, I salute each and every veteran.” 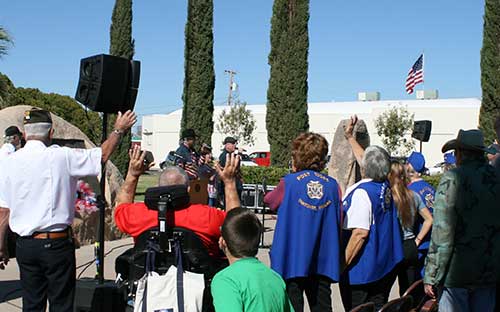 Wreaths were placed at the monuments, and a closing prayer was conducted. After this, the band “Tribute” sang several more songs. One of the performance was the patriotic song title, “God Bless the USA” by Lee Greenwood. With this last song, those in attendance stood and sang along.

On the 11th hour of the 11th day of the 11th month of 1918, an armistice, or temporary cessation of hostilities, was declared between the Allied nations and Germany in the First World War, then known as “the Great War.” Commemorated as Armistice Day beginning the following year, November 11th became a legal federal holiday in the United States in 1938. In the aftermath of World War II and the Korean War, Armistice Day became Veterans Day, a holiday dedicated to American veterans of all wars.