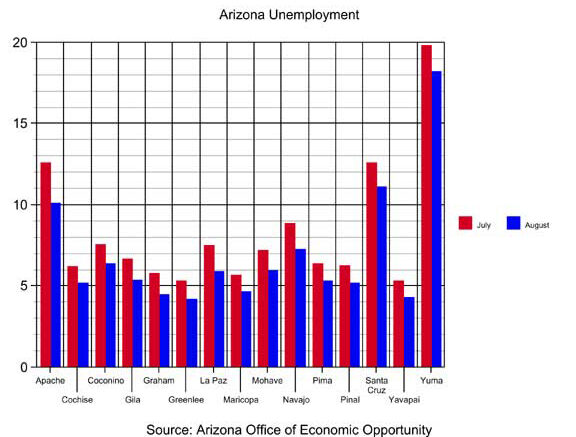 PHOENIX — Both Graham and Greenlee counties saw a significant decrease in the number of unemployed in August.

The jobless rate in Greenlee County fell by more than one point in August, from 5.3 percent to 4.2 percent, the lowest unemployment in the state.

Graham County’s jobless rate fell 1.3 points, from 5.8 percent in July to 4.5 percent in August, good for third lowest in the state, behind Yavapai County’s 4.3 percent.

Nearby Cochise County dropped one point to 5.2 percent unemployment in August.

Half of Arizona’s economic sectors reported job gains in August: Education and health services (up 11,800 jobs); professional and business services (up 5,300 jobs); leisure and hospitality (up 3,600 jobs); and trade, transportation and utilities (up 900 jobs); and construction (up 200 jobs).

Posting job losses were information (down 1,500 jobs) and financial activities (down 800 jobs).

Manufacturing, and natural resources and mining remained flat in August, posting no job gains or losses.