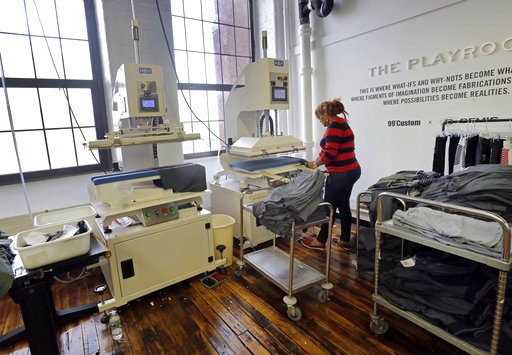 In this March 3, 2017, photo, a woman works with fabric at 99Degrees Custom, an apparel manufacturer specializing in sewn and bonded sports and activewear, in Lawrence, Mass. According to information released Thursday, March 30, 2017, by the Commerce Department, the U.S. economy grew at a slightly faster rate in the fourth quarter than earlier estimates, as consumers ramped up spending that’s expected to fuel growth throughout 2017. (AP Photo/Elise Amendola)

WASHINGTON (AP) — The U.S. economy grew at a slightly faster rate in the fourth quarter than earlier estimates, as consumers ramped up spending that’s expected fuel growth throughout 2017.

The gross domestic product, the economy’s total output of goods and services, expanded at an annual rate of 2.1 percent in the October-December period, the Commerce Department reported Thursday. The figure is an improvement from the previous estimate of 1.9 percent. The added strength stemmed from stronger consumer spending, which offset an increased drag from trade.

Many economists project growth of around 2 percent in the current January-March quarter, but they expect greater strength as the year progresses as bullish consumers keep spending.

“Consumer spending will lead growth thanks to higher incomes from more jobs and rising wages, as well as likely tax cuts,” said PNC Economist Gus Faucher, who predicted GDP growth for all of 2017 at 2.3 percent.

That would be a significant improvement from anemic growth of 1.6 percent in 2016, the weakest showing in five years. Since the Great Recession ended in June 2009, the economy has averaged annual GDP growth of just 2.1 percent, the slowest recovery since the end of World War II.

President Donald Trump has pledged to boost GDP growth to 4 percent or better, though private economists are doubtful he can achieve that goal given the headwinds the economy faces from an aging workforce and disappointing productivity growth.

He said his economic program of tax cuts, deregulation and increased spending in such areas as the military and infrastructure would boost the economy back to growth rates not seen on a sustained basis in decades.

Trump’s legislative agenda faced a setback last week when Republicans were forced to pull a measure to repeal and replace former President Barack Obama’s health care law because they did not have enough votes in the House of Representatives. Despite the setback, Trump has said the administration will soon unveil a plan to cut individual and corporate tax rates, a key component of his stimulus program.

Treasury Secretary Steven Mnuchin said last week that even if the initial goal of getting the tax measure approved by August slips, he still believes the plan can win congressional approval by this fall.

Mnuchin has cited a lower goal of growth above 3 percent. Private economists, however, believe the impact of Trump’s stimulus efforts will be even smaller. Top forecasters with the National Association for Business Economists on Monday projected GDP growth this year of 2.3 percent, rising only slightly to 2.5 percent in 2018.

One complicating factor for Trump’s program is the Federal Reserve, which earlier this month boosted a key interest rate for the second time in three months and retained a projection for a total of three rate hikes this year. The Fed is raising interest rates to make sure that inflation does not become a problem but higher rates could make it harder to achieve faster GDP growth.

For the fourth quarter, the government revised its estimate for consumer spending, which accounts for two-thirds of economic activity, to a growth rate of 3.5 percent from a previous estimate of 3 percent.

The economy also got a boost from slightly stronger rebuilding of business stockpiles. However, these increases were offset somewhat by a bigger trade deficit, which subtracted 1.8 percentage points from growth in the fourth quarter, and less business investment than previously estimated.

The release Thursday was the government’s third look at GDP for the fourth quarter. It will issue its first look at first quarter GDP on April 28.