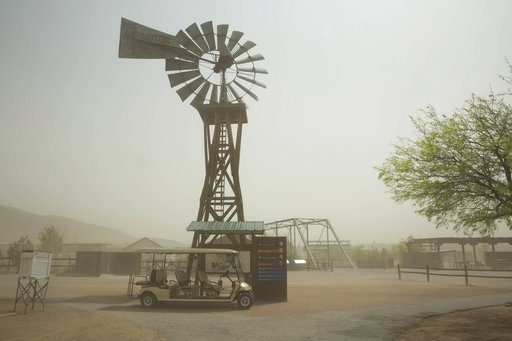 This photo taken March 23, 2017, shows sustained 43 mile per hour winds with 58 mile per hour gusts picked up dust obscuring both the Organ Mountains and A Mountain from view at the New Mexico Farm and Ranch Heritage Museum in Las Cruces, N.M. Not unlike a flash mob gathering in a public place to briefly capture the attention of unsuspecting passers-by, the ingredients in this case — warm temperatures and a lack of rain — came together quickly in New Mexico. It’s called a flash drought. (Josh Bachman /The Las Cruces Sun-News via AP)

ALBUQUERQUE, N.M. (AP) — Across New Mexico, unusually warm March weather and virtually no rain for a month prompted dust storms that closed highways, warnings for some to stay inside and rapid mountain snow melting that could threaten drinking water supplies and farmers’ irrigation needs.

This weather phenomenon — driven by a quick increase in temperatures and a lack of precipitation resulting in bone-dry soil — is called a flash drought. It has affected pockets across the country in recent weeks, from the Midwest to northern California.

In New Mexico, the flash drought is ending as quickly as it began thanks to rain finally falling this week.

Here are some things to know about the phenomenon:

With a snap of his fingers, National Weather Service hydrologist Royce Fontenot explained the speed at which flash droughts can develop and then disappear.

New Mexico broke dozens of high temperature records in March with some weather stations recording highs nearly 10 degrees above normal. Communities on the state’s eastern edge approached 90 degrees, while some parts of the arid state had no rain for a full month.

That left a swath of New Mexico’s eastern plains and parts of the Rio Grande Valley in central and southern New Mexico with no moisture in the soil’s top lawyers.

Flash droughts typically aren’t severe, but Fontenot said the level of damage that ensues depends on when the phenomenon strikes.

Winds whipped the soil in southern New Mexico and Arizona into dust storms earlier this month, making visibility so bad that transportation officials repeatedly closed sections of Interstate 10 between the two states.

In northcentral New Mexico, all the dust prompted health officials to warn people with asthma or respiratory illnesses to stay inside.

Irrigation season is just starting to ramp up with water being funneled through extensive networks of canals, but farmers who are starting to plant crops are relying on groundwater pumping and Mother Nature for moisture.

With New Mexico’s snowpack below average for this time of year thanks to the warmer temperatures, farmers and cities are worried that reservoirs won’t be replenished by spring runoff.

Forecasters say the snowpack in southern Colorado — which feeds the Rio Grande and supplies many in New Mexico — is in good shape.

WHEN WILL IT END?

Some parts of New Mexico were hit with rain over the last couple of days, with up to a quarter inch (0.64 centimeters) reported in some areas.

That will replenish some soil moisture, but forecasters say longer-term drought is likely to develop through June along New Mexico’s border with Texas and deeper into the Texas Panhandle.

It’s also expected to persist in southwestern Arizona and in parts of southern California as well as parts of Colorado and Oklahoma.

Heavy or at least average summer rains are needed to reduce the drought threat.

“Once you have a debt and need more water, it’s hard to catch up,” Fontenot said. “Certainly, the longer problem will be if we continue this sort of precipitation regime.”