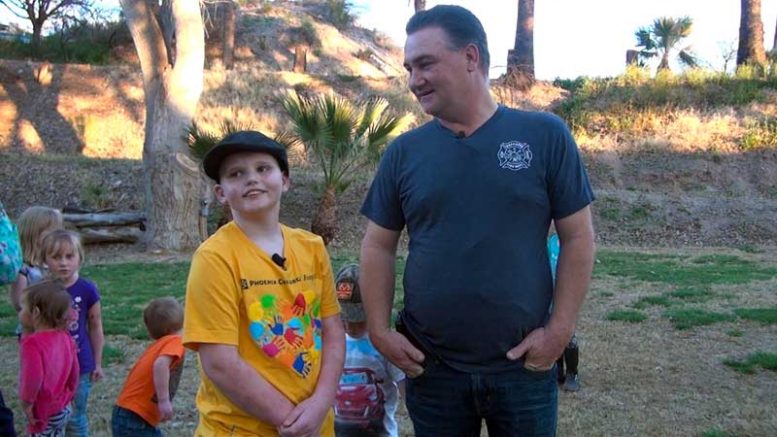 Jon Johnson Photo/Gila Valley Central: Andrew Kunz, left, meets Safford Fire Chief Clark Bingham for the first time, Thursday, at a barbecue in honor of the first responders. Bingham helped guide Andrew away from danger after he was swarmed by bees. Both are also allergic to stinging insects.

SAFFORD – It was less than two weeks ago that 11-year-old Andrew Kunz precariously hung onto his life after being stung more than 400 times by Africanized “killer bees.” On Thursday, the “boy who lived” showed how far he had come, playing and smiling at a barbecue dinner held at his Boy Scout leader Don Smith’s property in honor of the first responders who risked their lives to save his. 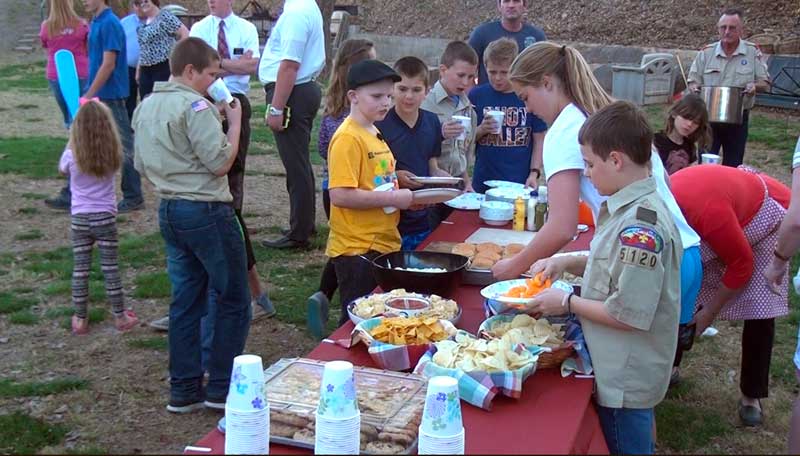 Jon Johnson Photo/Gila Valley Central: A barbecue was held Thursday in honor of the first responders who helped save Andrew Kunz’s life.

Andrew and a friend were attacked Feb. 20 by bees who had taken up residence in a rusted out old car in a gully where the boys were shooting a BB-gun behind Andrew’s residence off Sunset Boulevard. The area is in-between E. Graham Canal Road and Airport Road, north of the Gila River. The sound of the BBs hitting the car likely agitated the bees, which were most likely Africanized “killer” bees.

Smith, who is also a member of the Safford Fire District Governing Board, was at the scene the day of the attack.

“I didn’t think he was going to make it,” Smith said. “I guess I didn’t have enough faith.”

Two members of the Graham County Sheriff’s Office, Sgt. Jacob Carpenter and deputy Justin Baughman, and Safford Fire Chief Clark Bingham were stung during Andrew’s rescue. The three first responders were treated at Mt. Graham Regional Medical Center and released. The city of Safford has indicated that it is going to reward Bingham for his heroism. Bingham, who is also allergic to bee stings, led Andrew out of the fray through roughly 200 yards of desert to an awaiting ambulance.

Sgt. Carpenter told Gila Valley Central that dealing with the bees and the inability to get to Andrew was the hardest ordeal he has ever faced in his 17-year-career. He described a scene of carnage as the bees relentlessly attacked him and deputy Baughman as they desperately attempted to save Andrew. 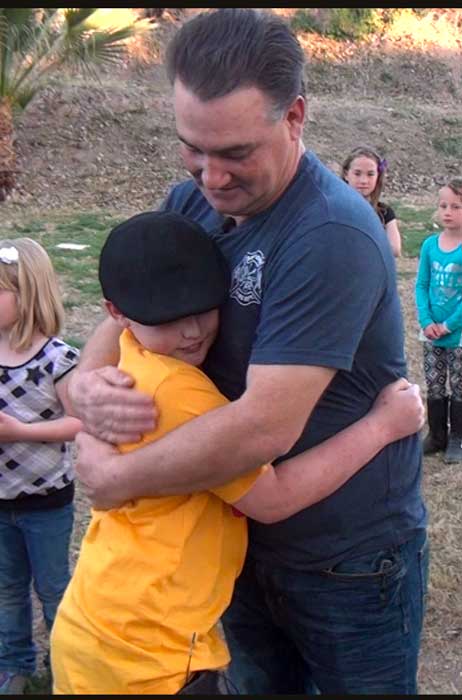 “I’m just happy that Andrew is doing good,” Carpenter said. “I just pray for him and hope he recovers from this.”

After four days at Phoenix Children’s Hospital, Andrew returned home. After a report Andrew gave of channeling his favorite Dragon Ball Z character, Vegeta, went viral, Gila Valley Central received emails from Funimation Entertainment, which produced the English version and manages the franchise in the United States, and another website with a DBZ tie-in, which both wanted to give Andrew some swag and cosplay clothes. After Gila Valley Central brought them together, Andrew received a phone call from the actor who portrays Vegeta and was told he would be Funimation’s guest at the upcoming Phoenix Comic-Con in May.

Bingham expressed his pleasure at the barbecue being put on for the first responders and said it takes a team of dedicated individuals to help keep the community safe. He also advised to be wary of bees and do what is necessary in case of an attack.

“We need the bees – they provide pollination for the crops – but if you’re attacked by them, cover your face and run away,” Bingham said.

“I think its fantastic (to be) honoring some heroes (who) are willing to give of themselves and their own lives to save a child that’s in need,” Kreg Kunz said. “We don’t have very many of those people left in the world, but we got em’ here in Safford, and we’re going to hang on the them,” (sic)

On Thursday, it was all smiles as the first responders, family members and friends shared the joy of each others company, brought together by tragedy but held together by love for one another.