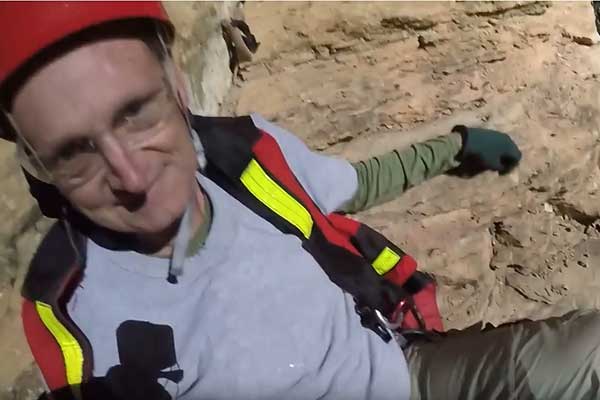 Sedona, Ariz. — On November 10, 2018, at 5:30 p.m., an Arizona Department of Public Safety (AZDPS) helicopter was requested by the Yavapai County Sheriff’s Office (YCSO) to assist with a nighttime technical rescue of a 52-year-old climber on Thunder Mountain, north of Sedona. The Sedona man was reported to have been rock climbing without ropes and harness when he reached a point where he was unable to climb up or down. The temperature was also forecasted to drop down to near freezing.

Ranger 1, AZDPS’s new Bell 429 helicopter, arrived after sunset and using an external hoist, deployed a Trooper/Paramedic onto the ledge near the stranded climber. Lighting from Ranger 1 illuminated the scene while the Trooper/Paramedic wrapped the climber in a specialized transport suit. Utilizing the external hoist, he was then pulled into the hovering helicopter and flown to a YCSO command post. The climber, John Knight age 52 of Sedona, was not injured.

Although AZDPS Air Rescue units have been rescuing victims across the state for nearly 50 years, this mission represents the first external load technical rescue performed during night hours. Technical rescues are routinely conducted during daylight hours by AZDPS Air Rescue units. During night hours, Ranger crews traditionally access and extract victims by means of landing in confined spaces, one-skid landings, or hover insertions/extractions. The lack of external load capability at night can slow the rescue of victims in emergency situations. The addition of hoist technical rescue capability at night greatly enhances public safety in Arizona, as was the case in this mission. The night time technical mission was also made possible because of the extensive training by the helicopter crew. For the last 12 months, the AZDPS’s helicopter crews have gained significant experience in hoist operations and recently completed an intense two-week training program.

“This type of rescue is challenging even in the best of circumstances. Our new equipment and training that enabled this rescue to occur at night, really paid off. The victim was unprepared for a very cold night and our crew recognized he needed to be extracted from the mountain before temperatures dropped.” Said Colonel Frank Milstead, Director, Arizona Department of Public Safety.