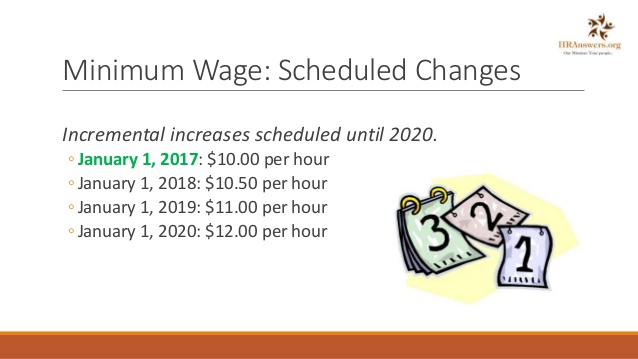 For tipped workers who make at least $3.00 an hour in tips, the wage starting January 1st will be $8.00 an hour. That’s because the law gives employers a $3.00 tip credit for wages paid to workers who can get up to the $11.00 minimum when their earning in tips is factored in.

According to George Hammond, UofA economist, the state is still growing rapidly. “Overall wage growth accelerated last year, as you might expect with a minimum wage increase,” he said. “There’s little indication of a slowdown in hiring by those companies most affected by having to shell out more money.”

On November 8, 2016 Arizona voters approved Proposition 206, referred to as the Fair Wages and Healthy Families Act (the “Act”). Proposition 206 raised the new minimum wage requirement to $10.00 per hour effective January 1, 2017; the Act requires employers to provide earned paid sick time benefits to all Arizona employees effective July 1, 2017. The Industrial Commission of Arizona was given the authority to enforce and implement the Act.