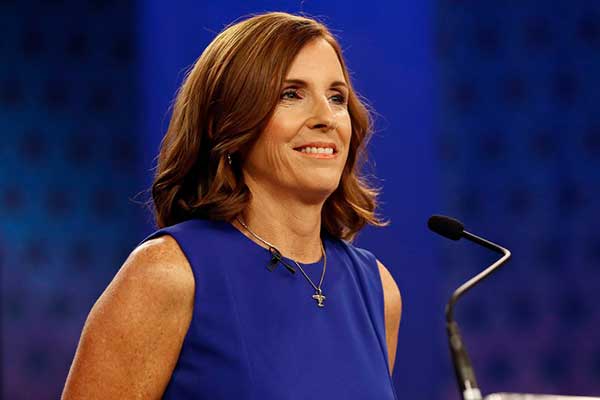 “All her life, Martha has put service first — leading in the toughest of fights and at the toughest of times,” said Governor Ducey. “She served 26 years in the military; deployed six times to the Middle East and Afghanistan; was the first woman to fly in combat and command a fighter squadron in combat; and she’s represented Southern Arizona in Congress for the past four years. With her experience and long record of service, Martha is uniquely qualified to step up and fight for Arizona’s interests in the U.S. Senate. I thank her for taking on this significant responsibility and look forward to working with her and Senator-Elect Sinema to get positive things done.”

“Over the last year, I’ve traveled across this great state, meeting with countless Arizonans, and listening to them,” said Representative McSally. “I’ve heard about the challenges they face and the hopes they have for the future – and I’ve learned a lot. I am humbled and grateful to have this opportunity to serve and be a voice for all Arizonans. I look forward to working with Senator-Elect Kyrsten Sinema and getting to work from day one.”

“Because she currently represents Arizona in the US Congress, Martha McSally certainly has the knowledge and experience to represent our State in the Senate,” said Senator Jon Kyl. “Moreover, she is highly energetic, smart and committed to finding practical solutions to problems facing our State and Nation. She is an excellent choice.”

Governor Ducey appointed Senator Kyl to the Senate in September of 2018, filling the seat vacated by the late Senator John McCain. Senator Kyl’s resignation from the Senate will be effective December 31, 2018.

Background
Representative Martha McSally represents Arizona’s Second Congressional District in the U.S. House of Representatives, where she serves on the Armed Services and Homeland Security Committees and chairs the Border and Maritime Security Subcommittee.

A graduate of the United States Air Force Academy, Martha served in our nation’s military for 26 years, retiring as a full Colonel in 2010. During her military career, she deployed to the Middle East and Afghanistan six times and was the first woman in U.S. history to fly a fighter jet in combat and the first woman to command a fighter squadron.

In 2001, Martha sued the Department of Defense over a discriminatory policy that forced female service members to wear Muslim garb overseas. She successfully fought to overturn the policy, ultimately shepherding legislation that passed both chambers of Congress and was signed into law.

Over her two terms in the House, Martha has been repeatedly ranked one of the most effective members of Congress. She lives in Tucson, Arizona.