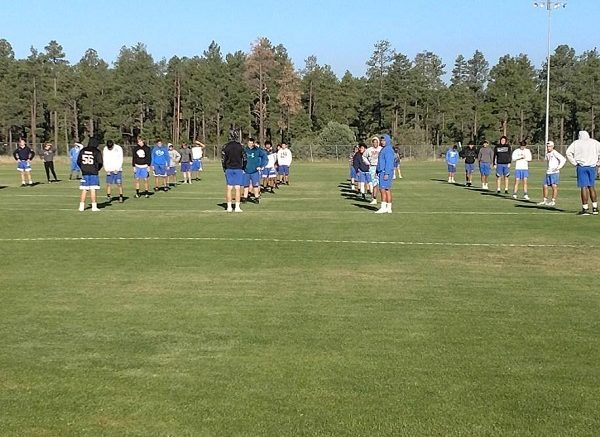 The Safford football team stretches before practice in Pinetop

Yes, Safford will indeed field a varsity football team this season. Many have asked and Safford Unified confirmed that yesterday.

This all stems from the 12 News release of the cellphone footage on June 12th at 5:40pm of what they deemed “a beating” of a Safford football player by his teammates. There have been no criminal charges by the Pinetop/Lakeside police or the Navajo County District Attorney’s office.

In a statement released to GilaValleyCentral on July 9th, Safford Unified confirms varying forms of suspensions but not who or how long the suspensions will be.

“With regard to the investigation into SHS football, no removals have been issued. We have administered a varying degree of suspensions and other disciplinary consequences. The district will not release more specific details.”

This all but closes Safford Unified School District’s investigation into the camp incident. The team was already suspended from summer 7 on 7 tournaments and traveling to their California camp.

Safford opens their season August 23rd at home against Snowflake.