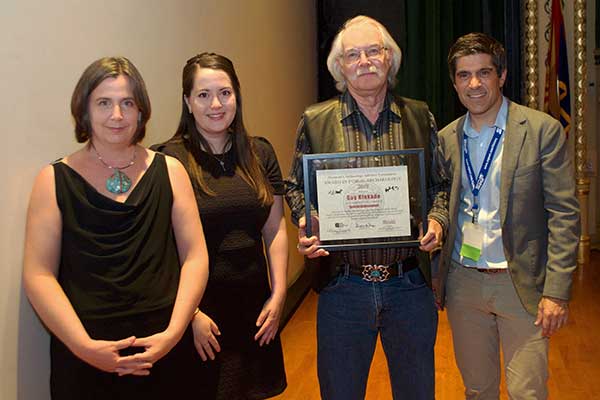 Gay Kinkade, who served as the BLM Safford archaeologist from 1975 to 2003 and is now retired, was honored with the Special Achievement Award by the Governor’s Archaeology Advisory Committee (GAAC), which recognizes individuals and organizations with Awards in Public Archaeology.

Kinkade is known for building Safford’s cultural program from the ground up including developing a file system, map atlas, and reporting methods. More than 40 years later, most are still in place, serving those conducting field work and research.

He surveyed thousands of acres and documented hundreds of archaeological sites, those being a large percentage of the sites originally recorded in the Safford Field Office. Much of the 1970s-1990s research was conducted or assisted by Kinkade, or built upon his work.

Kinkade actively monitored sites, conducted Archaeological Resources Protection Act investigations, and assisted law enforcement. He was a founding member of the Coronado Chapter of the Arizona Archaeological Society and was instrumental in developing the Safford Region Site Stewards Program.

Through these groups, he recruited a dedicated group of volunteers to assist in protecting cultural properties. Kinkade trained these Site Stewards to recognize cultural resources and how to document them. They then monitored known locations, helped record new sites, catalogued artifacts recovered and assisted with restoration projects. Two of those volunteers, Everett Murphy and Lee Dewester, won Governor’s Avocational Archaeologist Awards in 2014.

This is the second time that Kinkade’s work has been recognized. In 1997, he was named as the Land Manager of the Year by the Arizona State Historic Preservation Officer.