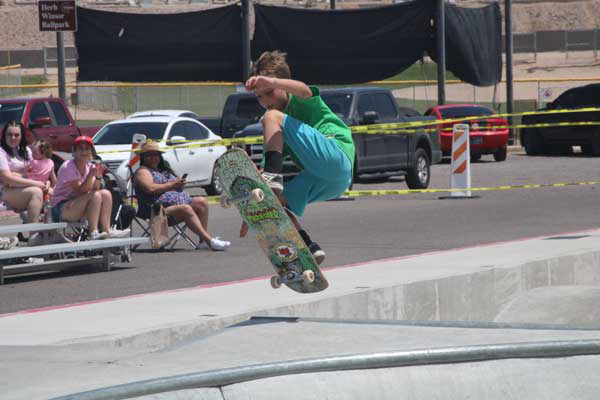 Lexis Ramirez, 8, executes an air out during his first ever skateboarding competition at the inaugural Madbowl Bash at Thatcher Skate Park on Saturday. - David Bell Photo/Gila Valley Central

THATCHER — The crowd lined the edge of the Thatcher Skate park Saturday, watching competitors try to top one another in the inaugural Madbowl Bash skate boarding and music event.

“You can see the eclectic crowd; there’s all kinds of different colors, dresses, hairstyles, everything. We’re all different but we’re all the same,” said Jared Rios, organizer of the event and owner of Cheecharrone Sk8 Shop in Safford.

Skaters of all skill levels took part, from professionals out of Phoenix and Tucson to beginners here in the Gila Valley, such as 8-year-old Lexis Ramirez. It was Ramirez’s first competition and he pulled off his favorite trick — an air out.

“Air out is where you go up a ramp and then you, like, fly in the air, basically,” Ramirez said.

The event featured prizes for the best tricks, a board design contest and plenty of live music, with 10 bands traveling from the Phoenix and Tucson areas. There were also raffles to benefit House of Hope, Big Brothers and Big Sisters, and the Safford High School Bulldog food pantry.

Rios said his next event will focus on local skaters before once again inviting talent from across the state. Date of the next event has not yet been announced.