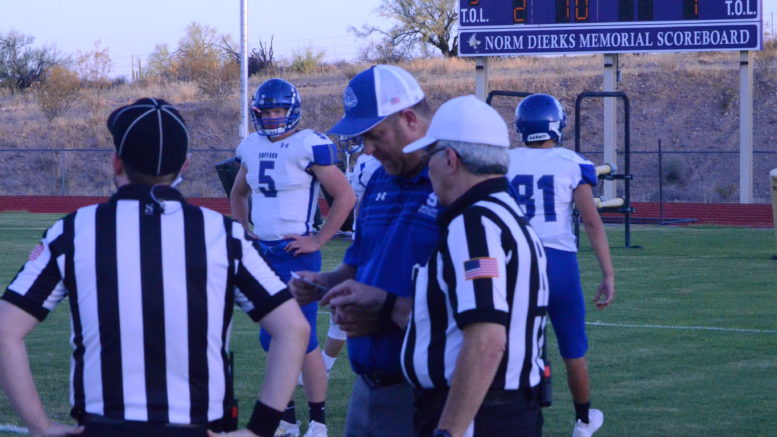 Eric Hjalmerson meets with officials before the start of the Safford/Wickenburg game this year. (Photo by Lee Patterson)

SAFFORD — Eric Hjalmerson announced via text to GilaValleyCentral today that he resigned as head football coach at Safford High School on Friday. He waited to make it public until after he met with the team this afternoon.

Safford was 15-8 in Hjalmerson’s two seasons as coach. The Bulldogs also won the 3A South for the first time since 1998 this season.

“I enjoyed coaching the football team at Safford,” Hjalmerson said. “Safford has great athletes and I hope the next coach can continue to build on what we started here.”

Hjalmerson said he doesn’t have any immediate plans for his next coaching job.

Safford is the third school in the Gila Valley to announce they are looking for a new head football coach. Ramon Morales stepped down at Thatcher earlier this winter and Pima announced they were parting ways with John Bryant a few days later.