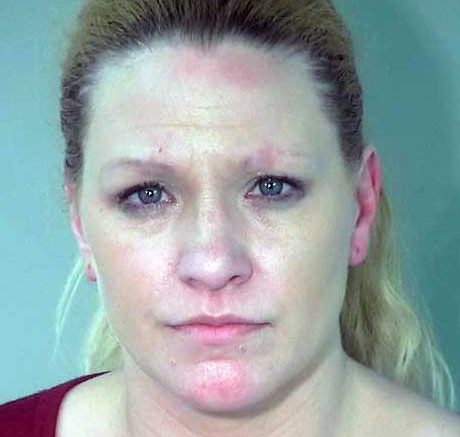 Contributed Photo/Courtesy GCSO: Cora Young was arrested for an outstanding warrant regarding a 2015 shoplifting case and was found to have heroin paraphernalia.

SAFFORD – A woman wanted for never answering a shoplifting charge filed in December, 2015, was apprehended Saturday in possession of needles she allegedly uses to inject heroin.

Cora Leann Young, 38, was arrested and booked into the Graham County Jail on warrant out of Thatcher Municipal Court for failing to appear at her sentencing hearing Jan. 28, 2016, regarding her shoplifting conviction. Young was located after police received a tip she was headed toward her residence in the 800 block of 7th Street in a white sport utility vehicle.

An officer responded to an area near Young’s address and pulled up to the residence when he saw a white SUV enter the driveway. Young was located in the passenger seat and was arrested.

During the arrest, the officer inquired if he could search Young’s purse and she refused. The driver of the SUV then took her purse into the residence.

The officer then asked the driver if he could search the vehicle, and the request was approved, according to a Safford Police report. The driver then removed two bags from the passenger side floorboard and put them in the trunk, advising the officer that he moved them so the officer could get to them easier.

The officer located two used syringes inside a pocket of a bag that had brown residue consistent with heroin use. The driver said his mother was diabetic and his mother and Young use the bag for when they go shopping.

Young corroborated the driver to a point by saying she and the driver’s mother use the bag when they go shopping at Walmart, but then she said they both use the syringes to inject heroin. She then informed the officer of an additional used syringe in her purse and that was retrieved as well. A fourth syringe, this time unused, was also located in the vehicle’s glove compartment.

Young was booked into jail on her warrant with charges for possession of drug paraphernalia pending review by the Graham County Attorney’s Office. The syringes were photographed and disposed of by the officer.