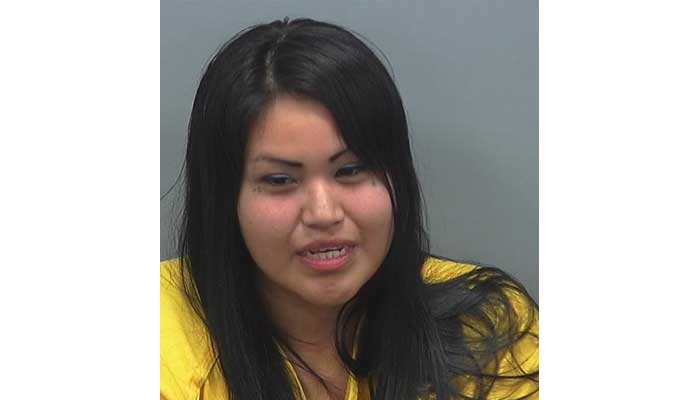 A woman was arrested Thursday and charged with two accounts of child abuse after drinking all day with a homeless couple in Safford.

Police responded to a call from Motel 6 in regard to a man harassing a woman and her two children. The woman, Eva Elgo, told police that a man and woman had her two children and refused to give them back because she was too drunk. An officer noted that Elgo had a distinct odor of alcohol about her. When officers asked Elgo when she last saw her children, Elgo’s responses were incoherent and unrelated to the questions police were asking.

Elgo had apparently been staying at the safe house with both children. Early Thursday she took her children and spent the day drinking with a homeless couple in their tent in a field north of Highway 70 in Safford. Investigators confirmed with the safe house that Elgo had been staying there with her children. A hotel clerk also confirmed that Elgo had been seen with two children earlier in the day.

More officers were called to the scene to investigate the whereabouts of the two children. The motel provided surveillance video footage that showed Elgo with a second person pushing the children in separate strollers. Elgo also showed the officers pictures of the children she had on her cell phone.

Officers located an empty baby stroller behind McDonalds and met up with a man who said that Elgo had left her two children with him and his girlfriend. The man told officers that he and his girlfriend live in a tent north of highway 70. He said that Elgo had come to their tent earlier in the day with her two children and they had spent the day drinking together. Toward evening, the couple asked Elgo if they could go to McDonalds to get some food for the children. The trio began walking to McDonalds with the homeless couple pushing the strollers. Before they arrived at McDonalds, however, Elgo apparently disappeared. The man told the woman to stay with the children while he backtracked to look for Elgo. The man walked all the way back to his tent but never found her. By the time he arrived back at McDonald’s his female companion and the two children were gone. There was only an empty stroller and of course, the police.

About 10:00 PM Thursday night, investigators were notified that the children had been found in Bylas and were with a Bylas Police officer. For an unknown reason, the homeless woman apparently decided to take the children to the reservation and had alerted the San Carlos police department that she was coming. A Safford police officer was sent to pick up the children and bring them back.

Based on Elgo’s apparent level of intoxication and her inability to provide details of her and her children’s locations through the incident combined with the homeless couple’s statement that Elgo had abandoned her children, she was placed under arrest and booked into the Graham County jail.