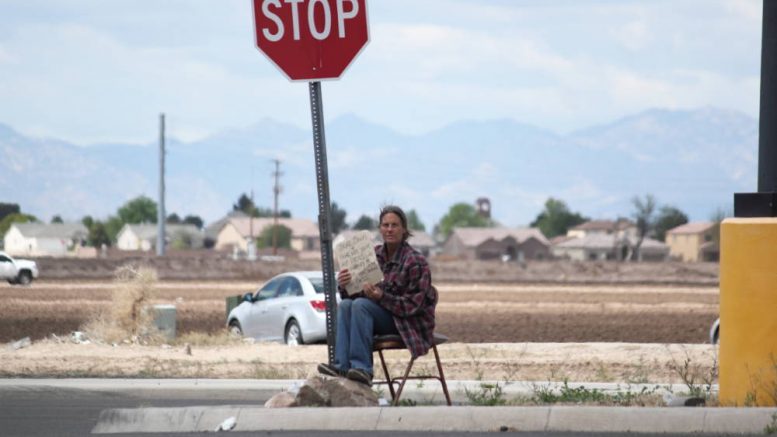 Eric Burk Photo/Gila Valley Central: A woman flies a sign by Walmart. Her husband said that they make "Just enough to eat, and not much extra."

How big is Safford’s homeless community, and who is helping?

This is the third installment of Gila Valley Central’s four-part series regarding homelessness in our area. This installment focuses on people and organizations assisting those in need.

SAFFORD – Carmen Tellez estimates there are 200 homeless people in the Gila Valley.

Tellez and her volunteers who run the St. Vincent de Paul (SVDP) food bank serve 25-40 people five days a week, including the homeless. However, the Arizona Department of Housing report states that on January 26, 2016, a team located just 11 people spending the night without shelter. The 2017 count will be released in May. 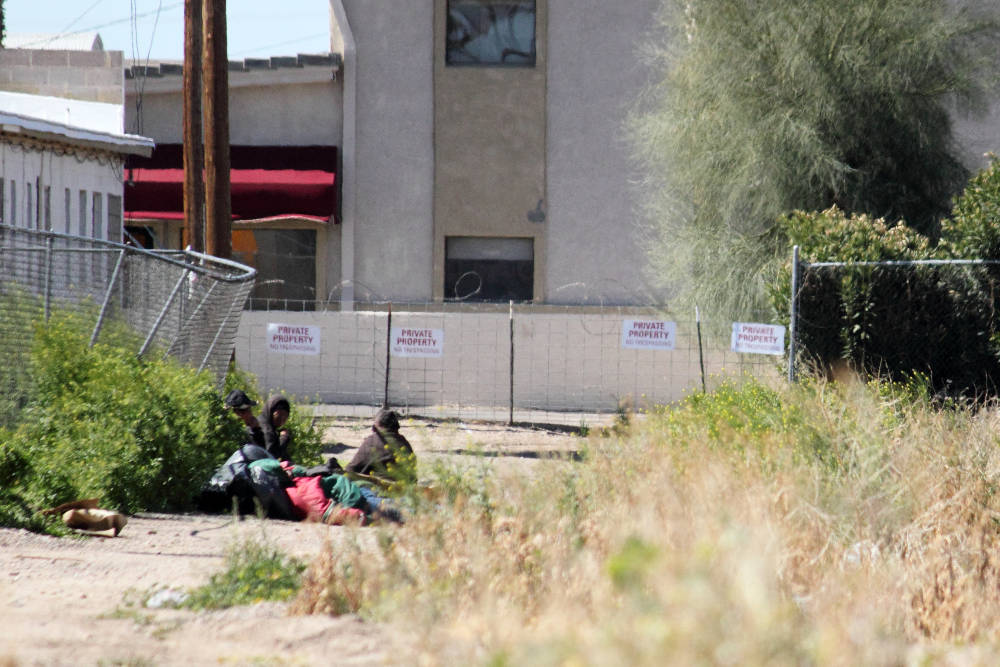 Definitions of homelessness vary depending on the mission of those who help the poor. Susan Lindsey, homeless liaison for Safford Unified School District, distributes training material saying that homelessness can include families living with relatives or in inadequate trailers. In 2014, the district began monitoring numbers. Lindsay said that in 2015 there were 31 homeless students, 23 in 2016 and 20 in 2017.

Lindsey says homeless families may not self-identify, fearing they will have their children taken away. However, Lindsey keeps the information secret, only telling her co-worker who handles the meal situation.

“We don’t want them to be stigmatized,” she said.

In special cases, sometimes a teacher is notified when homelessness is affecting a student’s education. Students may not be able to get a library card if they do not have a home, so Lindsey will work with the student’s teacher to get them books.

“Some kiddo’s parent calls me and says, ‘You know, Johnny keeps losing points because (he has) to read at home, and we’ve read the one book we have for a month and a half,’” Lindsey said.

While she can waive school fees or help pay for school supplies, the small amount of federal funds available to Lindsey means she often finds herself helpless to meet the real needs of homeless children.

“When a family walks in, and, you know, there’s this kiddo who needs to come to school, but literally, they’re going to be sleeping on the street tonight, I can’t give them anything,” Lindsey said.

Although the Mount Graham Safe House (MGSH) can help with sheltering domestic violence victims, many families do not qualify. According to Lindsey, children are homeless due to incarcerated parents, parents kicking teens out, job loss, and even houses burning down. 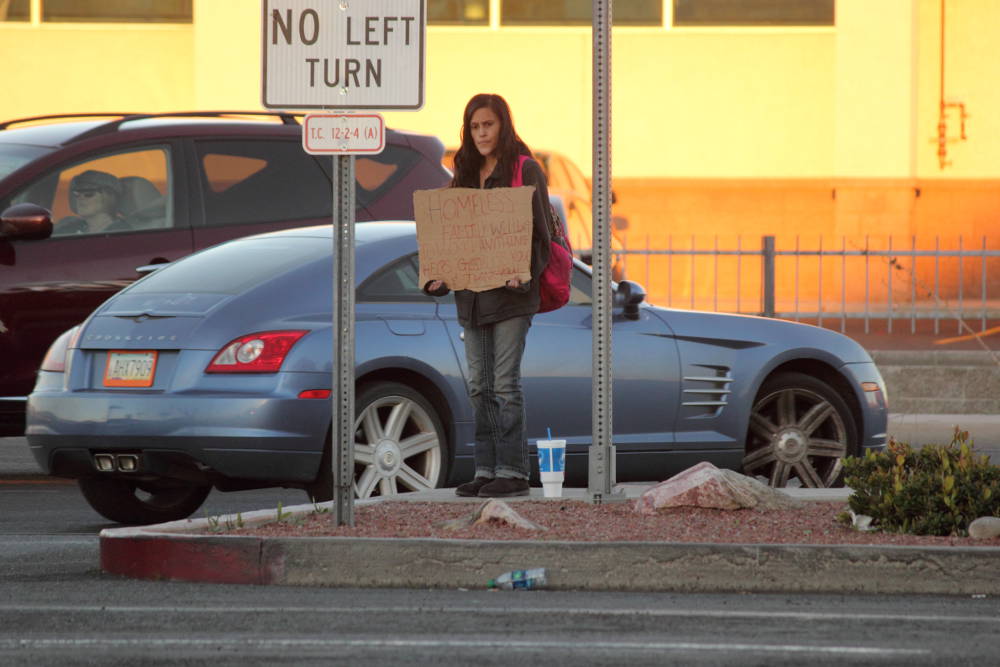 Eric Burk Photo/Gila Valley Central: A woman flies a sign asking for help for her family outside Game Stop in Thatcher. According to her husband, they typically try to earn enough each day to cover the cost of a motel room for the night.

“I had a junior high girl and her mom come in, and they were in the shelter for a little bit, and they got kicked out of the shelter because of an unfortunate situation with another person there, and they literally had nowhere else to go,” Lindsey said,

Lindsey bought them bus tickets to Payson, since there was a shelter in Payson with available beds.

“We desperately need a homeless shelter in this area in my opinion,” she said.

The Mount Graham Safe House is a shelter primarily for battered and at risk women and children, but when they have free beds, they offer them to local homeless, both men and women. Jeanette Aston, Executive Director, says the MGSH has been abnormally full for the past six months, preventing the facility from housing regular homeless.

Aston agrees that a dedicated shelter is a serious need for the community. Although it has not been officially discussed among the MGSH leadership, she estimates that with a building and $100,000 a year, the MGSH could expand to have a basic 20-bed homeless shelter. The MGSH provides tents, bedding and clothing to homeless. Debra Darman works specifically with local homeless, taking them meals once a week.

The River Church, led by Pastor David Chapman, takes meals to Firth Park at 11 a.m. on Tuesdays and Thursdays. The meals allow Chapman and his team to meet with homeless on a personal level, speaking with them and meeting their social and physical needs.

CHAP Ministries, run by Greg St. Hilaire, is another local ministry working with local homeless. St. Hilaire prioritizes enabling families and single men to move out of homeless situations. The ministry has a 10-bed men’s shelter and two, three-bedroom houses for families. St. Hilaire requires those in his program to spend eight hours a day looking for work. When they have a job, they are required to save 25 percent of their earnings and to pay 25 percent back to CHAP Ministries. The CHAP Ministries website states that 111 individuals, including 14 families, have become homeowners through the ministry’s programs.

St. Hilaire says many of the men he works with have been forced out of homes because of domestic issues. Others are disabled, and cannot afford to meet rent. Whatever their situation, St. Hilaire is adamant that he will not run a flophouse for people with entitled attitudes. 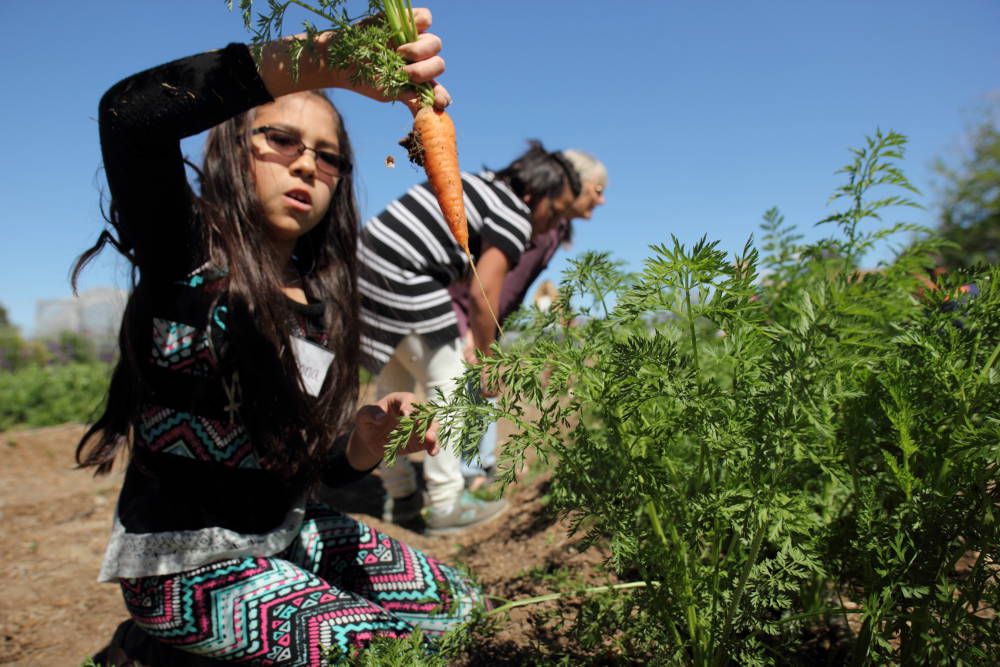 There are two food banks offering free food in Safford: St. Vincent de Paul, located on East Main Street, and Our Neighbor’s Farm and Pantry (ONFP), located next to the First United Methodist Church. While St. Vincent is open Tuesday through Friday from 10 a.m. to noon, ONFP is open Tuesdays and Thursdays only, from 10 a.m. to noon and 1 to 3 p.m. In addition to food and clothing, St. Vincent is also developing a program to partially assist with rent, utilities or housing repair.

Both food pantries are staffed by volunteers and receive food from Bashas, Safeway and Walmart. Additionally, Our Neighbor’s Farm and Pantry has a small volunteer operated farm that provides fresh produce picked that week to the pantry’s clients. The pantry gives out 250,000 pounds of produce each year.

“We help people (who) do not get enough income to support their family,” said third grader Skylar Larchick, a frequent volunteer at the farm. Larchick says fresh produce is a priority of Our Neighbor’s Farm and Pantry.

Clonts, who is the pastor of church Grace Tabernacle, which operated the HOD for seven years, says while a shelter might be helpful for some, a soup kitchen might be a better resource for area homeless. Although initial overhead developing a kitchen might be high, costs could be kept low if existing facilities were used and partnerships developed with pantries. Sherri Clixby, director of Our Neighbor’s Farm and Pantry, is open to the idea. 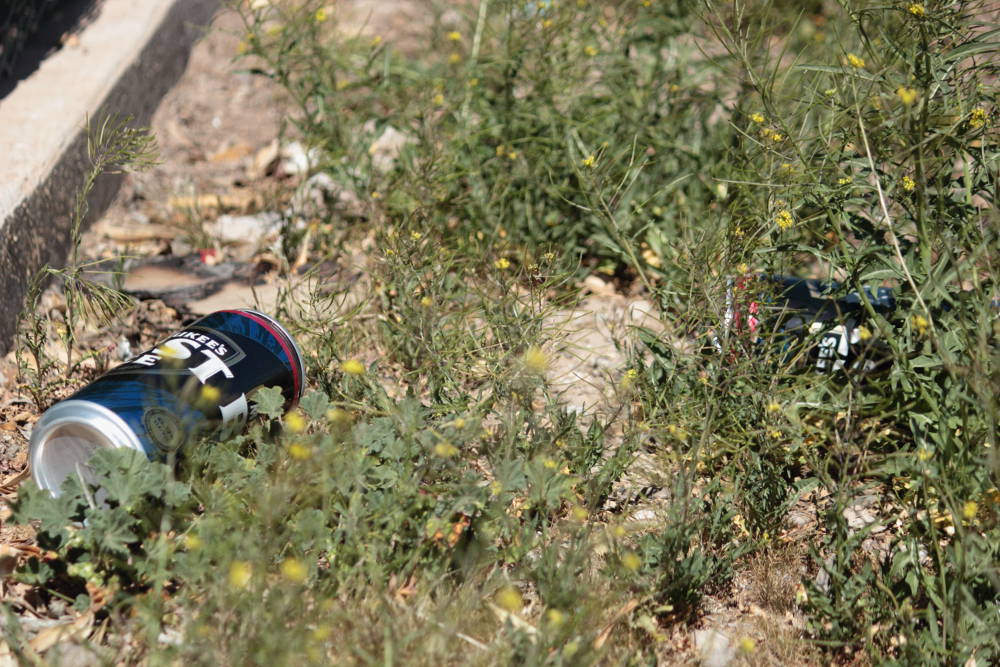 Although he thinks homelessness is severe, Clonts is very opposed to giving cash to the homeless. He and his church will spend money to meet needs as varied as car tires to hotel rooms, since he thinks that alcoholism is a serious problem and cash gifts are enablement instead of real help.

“You don’t help someone by giving them money,” he said. “Homeless people are very successful at panhandling.”

So how can the Gila Valley help its homeless residents? The food pantries are always looking for volunteers, Tellez emphasizes. Clothing and bedding can be donated to the Angel’s Closet at Desert Springs Community Fellowship or to the GCRC or SVDP, which have voucher programs for clothing for those in need.

If you want to give to a homeless person, Clonts recommends giving groceries, fast food or other non-cash resources. Financial donations to the various ministries are welcome, especially this Tuesday, April 4, which is Arizona Gives Day, a day dedicated to raising funds and awareness for nonprofit organizations. More information and donations pages can be found at http://azgives.org .

Arizona Gives Day and what it means for local non-profits

Voices of the homeless: their stories in their words part four