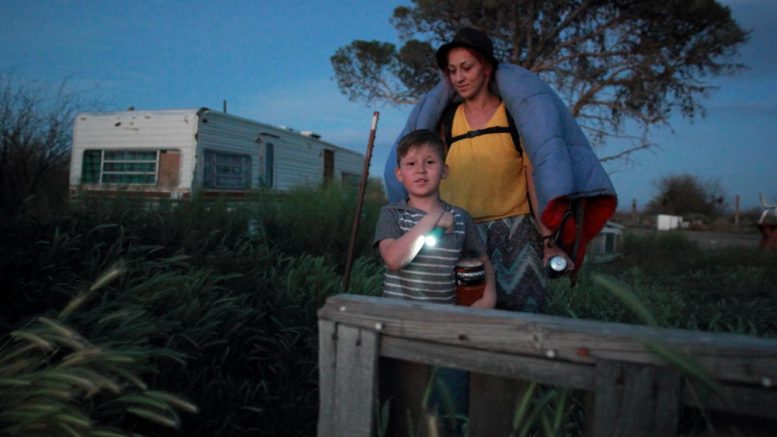 Eric Burk Photo/Gila Valley Central: Nichole Gonzales and her son, Rerecente, carry bedding from their trailer with no utilities. Gonzales stays in a friend's house. Rerecente normally stays in Gonzales' father's trailer, equipped with water, sewer and an electrical generator.

I would rather sit on a pumpkin: Nichole and Rerecente Gonzales

This is the fourth installment of Gila Valley Central’s four-part series on homelessness in our area and focuses on an extended family who are all living a non-traditional home life. Some names used are aliases.

SAFFORD – Rerecente Gonzales is not homeless. The 7-year-old says he has three homes: with his mother, with his father and with his Nana.

His mother, 27-year-old Nichole Gonzales, owns a camp trailer on the edge of Safford with no utilities and no other children present. Rerecente usually lives and sleeps across the street at his grandfather’s camp trailer that sports running water but has an electrical generator that recently stopped working. On weekends Rerecente visits his father, who is temporarily staying at his parents’ home. Rerecente’s Nana is his father’s mother.

Rerecente Gonzales might be homeless, according to guidelines from homelessness recognition training for the Safford Unified School District (SUSD). A SUSD brochure states homelessness can include “living in motels, hotels, trailer parks or campgrounds due to lack of alternative adequate accommodations.”

According to the brochure, homelessness may include living in a car or doubling up with relatives. Gonzales says she has notified the school district of her living situation so her son can catch the school bus. 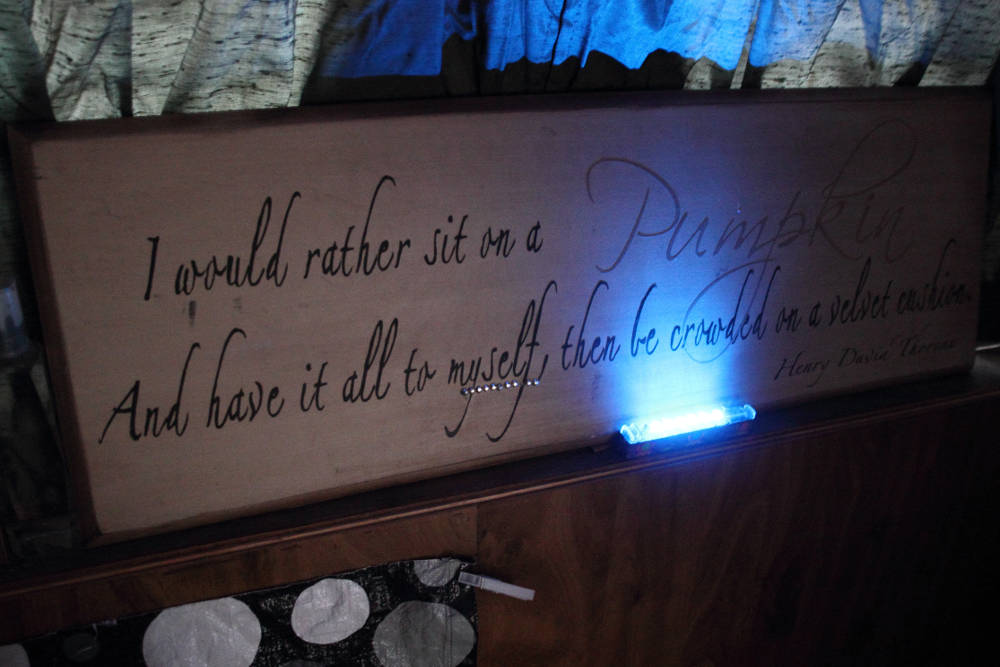 Eric Burk Photo/Gila Valley Central: A sign in Gonzales’ trailer quotes Henry David Thoreau’s “Walden:” “I would rather sit on a pumpkin and have it all to myself than be crowded on a velvet cushion.”

Gonzales does not sleep in her trailer, instead sleeping down the street at a friend’s house that has utilities. Since the generator broke, Rerecente spends the nights there too. Sometimes they sleep in their Chevy Blazer. Gonzales tells her son they are camping. They have not done that since someone broke the windshield, stole a bottle of propane and left another with the valve open, leaking gas inside the truck. Gonzales imagines having accidentally slept for the last time in the car with the open tank.

Some nights Gonzales and Rerecente get cold, so they huddle together to sleep.

Gonzales decorates her trailer with a few thrift store knick knacks and wooden signs with sayings on them. She has a framed picture of herself holding Rerecente when he was a newborn. She’s making her trailer livable little by little.

Gonzales wants to resume receiving food stamps soon, and she says she would never hold up a sign for money like the homeless of Downtown Safford.

“I feel like telling them to try harder,” Gonzales says.

She is very concerned for her brother, who is also homeless and has four children who do not live with him. Like Gonzales, he receives help from his father. Her brother has his head in the clouds, according to Gonzales. She feels a responsibility to him as her only brother. She says if she got a job, she would not be available to her family and to fix up her trailer.

Because of family history with drugs, Gonzales is opposed to all drug abuse, except the occasional joint. There is no alcohol debris visible around her family’s trailers or their collection of cars. 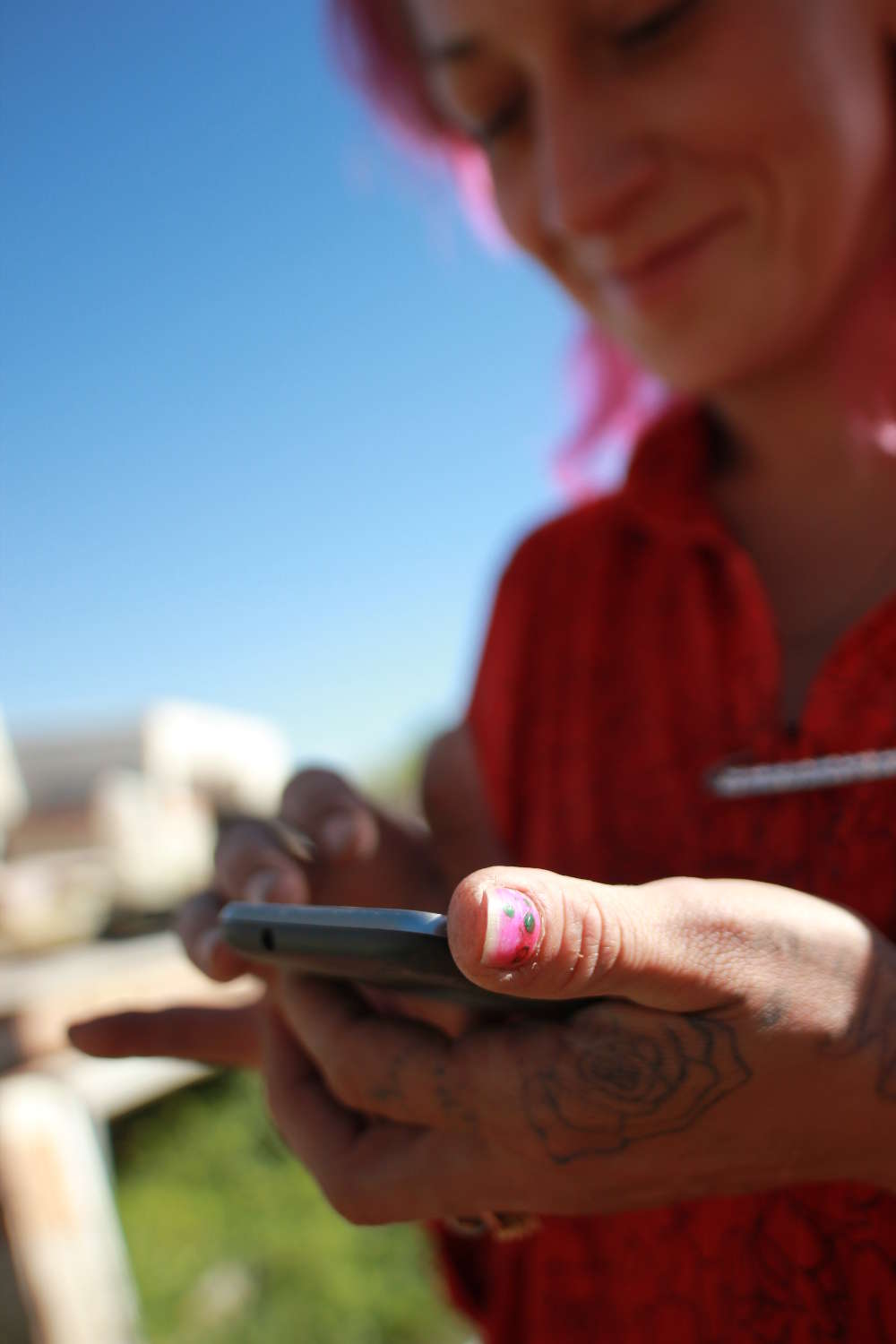 Gonzales and Rerecente live on about $200 a month in child support payments, plus assistance from Gonzales’ father, who receives around $600 a month in Social Security payments. The family relies on Medicaid and they use a medical shuttle to Tucson for serious medical needs. Often, Gonzales and Rerecente eat with Gonzales’ father and his wife. Kari Baker, Gonzales’ stepmother, goes to Our Neighbor’s Pantry food bank on Thursdays, when she can get the most food, so she can help the neighbors too.

Baker and her husband pay $200 a month to park their trailer and have running water and a sewer hookup. They cook on a barbecue or a propane camp stove. Baker would like to get a job. She has an associate’s degree in business management and secretarial experience. She also spent five years serving a felony charge, making the job hunt in an already saturated market difficult.

Baker fights for her family.

She has her hands full caring for her husband, who just had heart surgery, and serving as homemaker for her stepchildren and grandchildren. She helps Rerecente with his homework and teaches him to read from books she had as a child.

Baker recently left her phone on top of a car, shattering it when it hit the pavement. She will have to replace it at Metro PCS in Phoenix, but has no idea how she will get there. She recently applied to work at Safeway, but is concerned because she broke her phone and cannot complete the online portion of the application. To add insult to injury, her only means of transportation, her bike, was recently stolen. She has a suspicion about who took it, but without it she had to walk to Safford and back Thursday afternoon.

To make ends meet, Baker collects cans and takes them to Vista Recycling, which gives her only 35 cents per pound. Thirty-two cans makes a pound. With a broken generator, they faced having to use flashlights for illumination until April.

“We can’t do nothing financially until he gets his check on the third,” (sic) Baker said.

Her husband makes it clear, “We are not homeless.”

Gonzales has not always lived like this, having held three jobs. “I’ve always had a semi-good life,” she said.

She met Rerecente’s father when she was 16 and was pregnant within a few months. Later, the couple got married. Gonzales miscarried her first child, a girl, at 34 weeks, leaving her with post-traumatic stress disorder. She dropped out of high school after ninth grade. Rerecente was born four years later. She says she would do anything for her son.

“He’s my heart,” she said. “You know how they always say home is where the heart is?” 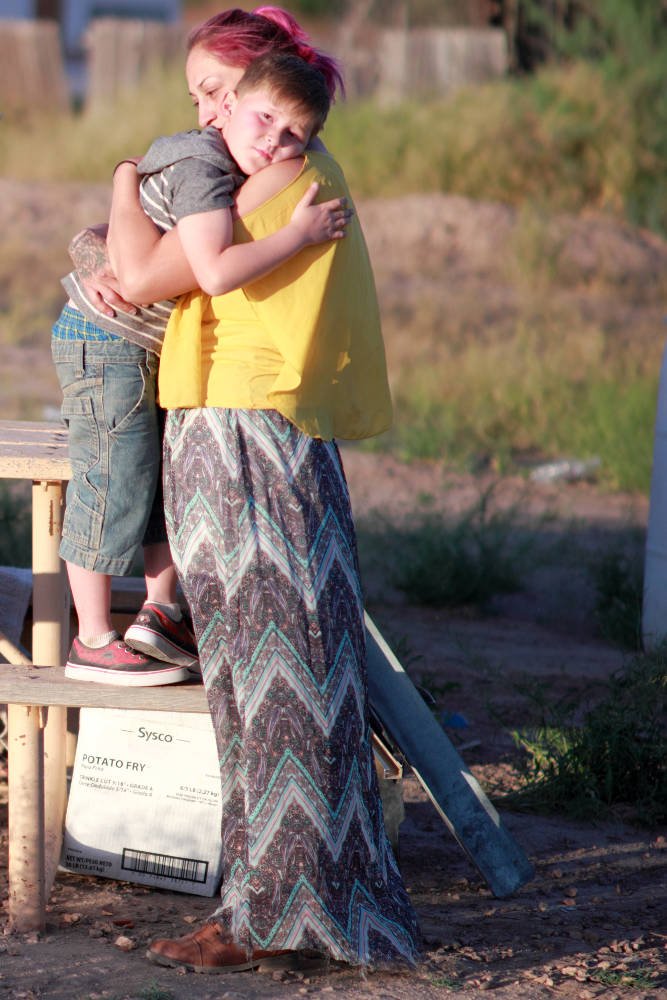 Gonzales still speaks well of her ex-husband and how he cares for their son. She says her son’s father and his family always welcome Rerecente with open arms.

“Being with my ex, I was an excellent person, but on my own I was miserable,” she said.

At 24, she got her driver’s license and decided to get a job again. Gonzales was earning $900 a month, renting a home for $550 a month and paying $250 a month for utilities and her phone. She bought a Chevy Blazer with her tax returns.

She has had three jobs, adding up to three-and-a-half years of experience: as a personal caretaker, as a tortilla factory employee and, most recently, as a janitor at the local Bureau of Land Management from 2014 to 2015. She lost that job when she was late because she was taking her son to kindergarten.

“That’s when I became homeless,” she said.

Gonzales has some raised white slashes across the tan skin over the veins on the underside of her left arm, products of her mental anguish. After the attempt, Rerecente’s father held Rerecente up and told Gonzales she had to be there for her son.

Gonzales’s mother passed away two weeks ago, partially caused by drug abuse, and Gonzales is grieving. She constantly wavers between hope and despair.

Gonzales moved in with her mother in her final months, but she cannot stay in her mom’s trailer anymore. Near the end, her mother started to talk about life.

“You know, you’re given what you have and then they take things away, but you still have what you have, so you should be grateful,” Gonzales remembers her mother saying.

After her mom died, Gonzales was riding her bike, mentally in denial. Gonzales heard her mom’s voice: ‘Mija, it’s true.’

“I just wanted to swerve into traffic and just die,” she said. 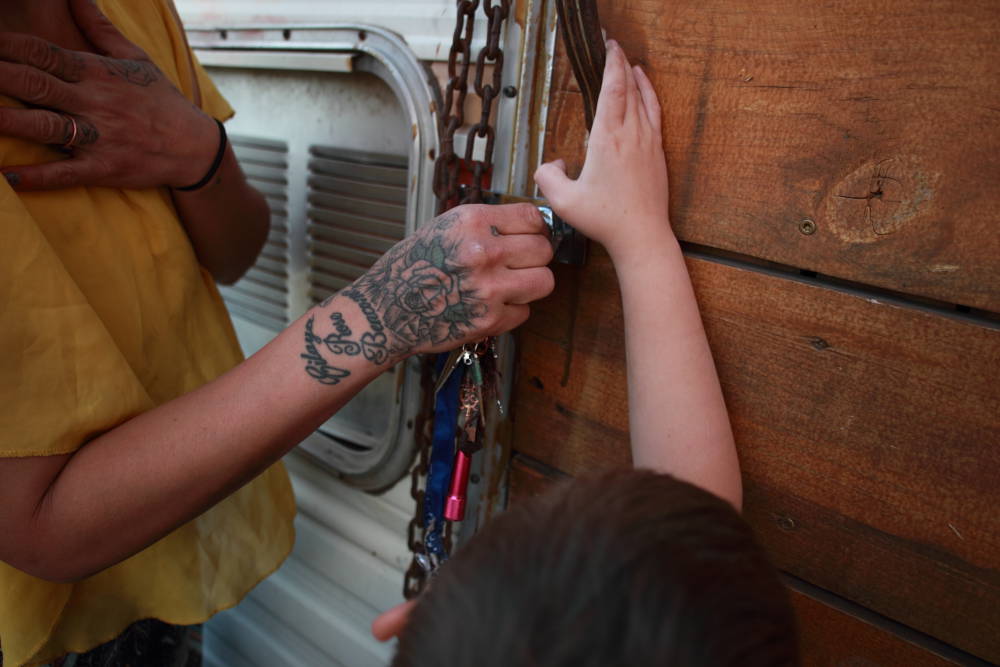 In addition to PTSD, Gonzales also suffers from bipolar disorder. Some of her ribs are broken from a recent fight. She and her son were recently diagnosed with H. pylori, a bacteria that can cause painful ulcers and stomach cancer. Gonzales says it is like a tornado in her stomach.

According to Gonzales, growing up in economic hardship will make Rerecente a stronger man when he is older, one more able to care for a family.

Despite the recent family death and his stomach pain, Rerecente is a normal-seeming 7-year-old. His clothes are clean and not torn, at least until he gets outside. He often fights with Betsy, the family dog, rolling in the dirt and slapping at her as she jumps on him. Betsy waits for him to come home from school every weekday. Rerecente says in school he is learning “every single word.”

“I’m going to do anything for my son to make sure that he gets to school and learns and he can’t say ‘I can’t,’” Gonzales said.

Rerecente likes superheroes. His favorite is The Hulk. Baker is constantly telling him to pull his pants up. She calls him over. “Let me tie your shoes, esé,” she said.

Gonzales worries about him. She says that he and other kids at school do not always get along, but she’s trying to teach him respect and to not be mean. He acts out to get attention from other kids. Rerecente likes to stay with his Nana because there are other children there. He is excited to see his father on weekends.

“He’s in that stage where he needs a positive role model,” Gonzales said. 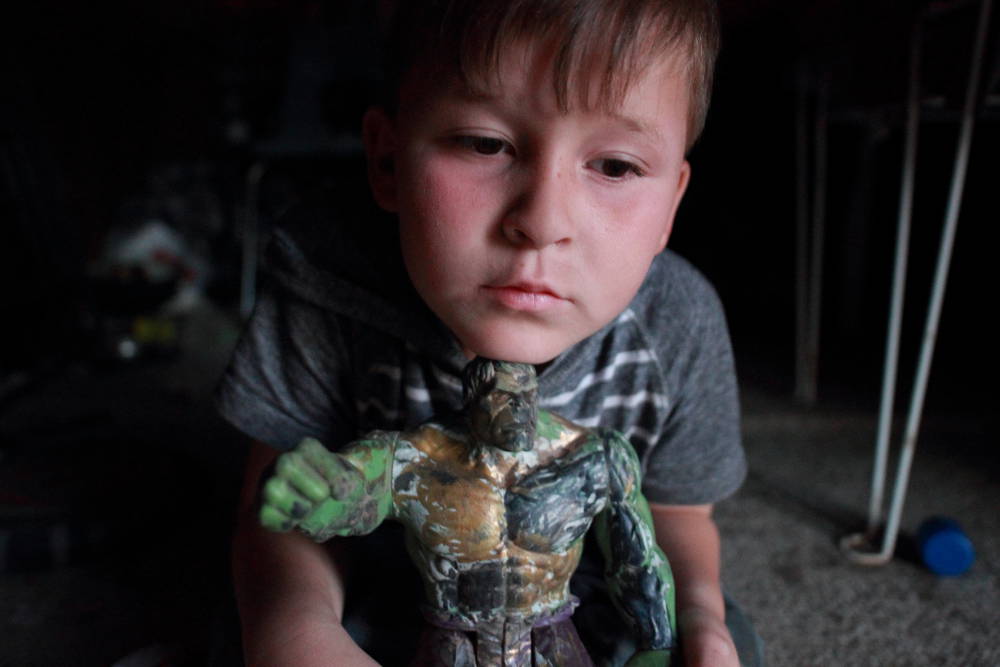 Gonzales is trying to figure out what to do next. She says she is not lost.

“I very much know what I’m doing, I just don’t know how to get there,” she said. “The only thing I need is, God (expletive deleted), my son needs a friend. I can’t force no one to like him.” (sic)

Voices of the homeless: their stories in their words part three