Eastern Arizona College was down to their final 3 outs Thursday in St. George, Utah trailing #2 Chipola 3-1 and battle back to tie the game and force extra innings at the NJCAA Division 1 National Championship Tournament.

Gila Monster Pitchers Pania Monk was on cruise control through 5 innings allowing just 2 hits and striking out 5. She allowed 4 hits in the 6th inning and Chipola took a 3-0. EAC answered in the bottom of the inning with an RBI single from Sala Pedebone to make the score 3-1.

That score stood heading into the bottom of the 7th. Eastern’s Kaila Burnett led off with a 4 pitch walk, pinch-hitter Kana McCoy was hit by a pitch then Alyssa Salud-Mendoza grounded into a fielders choice. With runners on the corners Lena Kotrys singled in a run followed by a Czarina Lorta sacrifice fly to center field to score the tying run.

Monk took care of Chipola in the top of the 8th to set the stage for Vesi Liilii who took a floating change-up deep over the left field fence to upset the Lady Indians 4-3. 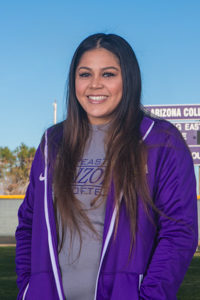 The loss was just the 3rd loss of the season for Chipola according to their athletics website. EAC moves to to 54-10 on the season.

The Lady Gila Monsters will move into the next round Friday morning at 11:00am(Arizona time). They will take on the winner of Tyler (TX) and Temple (TX).