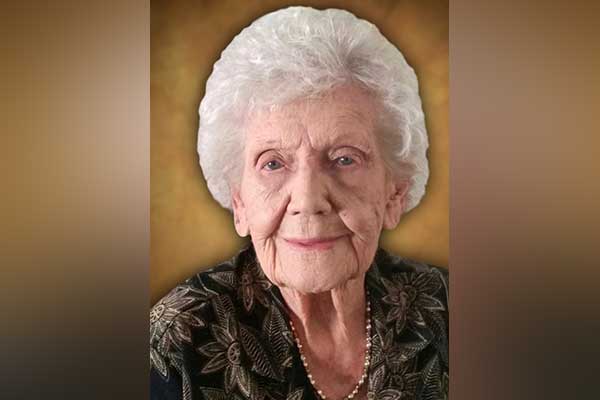 Venna Lue McBride McEuen was born January 20, 1912, in Morenci, Arizona Territory to Ether and Bertha Carter McBride. She was the second and last surviving of their ten children. About three weeks later, on February 14, 1912, Arizona gained statehood.

Lue grew up hauling water from the well, cooking on a wood stove, washing on a washboard, and sewing on a treadle machine. She attended a one-room schoolhouse, then rode the bus to Pima School and later attended Gila Academy.

She married Catlett McEuen in 1930 and began a loving partnership of raising their children and cattle. After Catlett’s passing in 1967, Lue continued to own and operate the McEuen Ranch at the mouth of the Gila River, with the help of her sons, Gary, and Randy. She was a member of the Arizona Cattle Growers for 65 years.

At the age or 97, Lue sold the ranch and retired to Pima. She voluntarily quit driving at the age of 99 when she said, “My reflexes are just not as good as they used to be.”

Lue has always been an active member of the Church of Jesus Christ of Latter-day Saints. Heber J. Grant was the Prophet and President of the church when she was born. Lue began teaching Primary at the age of 12. She served in the Relief Society and was a Visiting Teacher for 75 years.

Lue was eight years old when women received the right to vote in 1920. She first voted in 1934, as one had to be 21 years old to vote at the time. Franklin D. Roosevelt was the President of the United States. She actively followed last year’s presidential campaign and voted in every election for 86 years.

Lue lived alone until she was 102. After suffering a fall, her son Randy moved into her home to help care for her. She was on hospice for three months and with Randy’s constant care Lue recovered and no longer required hospice. Randy continued to live with and care for her up and until her passing on the afternoon of November 12, 2021.

Lue loved to cook, read, crochet, and grow beautiful flower gardens. She began her life in the horse and buggy days and lived to see space travel.

She was always a happy, optimistic person saying no the matter the trial, “We’ll get through this.” We will miss her loving care and example to us all.

Graveside services for Mrs. McEuen will be conducted Friday afternoon, November 19, 2021, at 3:00 p.m., at the Pima Cemetery by Ron Derrick.