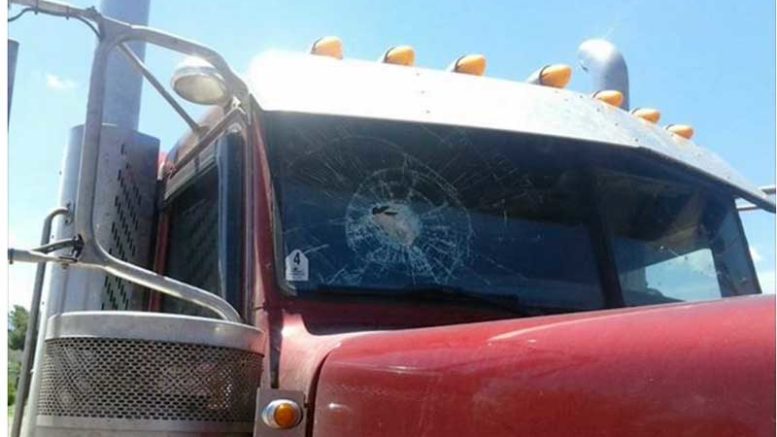 Contributed Photo: This semi-truck was struck by a rock as it passed through the San Carlos Apache Reservation in July.

SAN CARLOS – The San Carlos Police Department has issued an advisory for motorists to be wary rocks – falling from the air or already on the road – when traveling on U.S. Highway 70 through the San Carlos/Peridot area. The warning was put out after a rash of incidents in which several vehicles – both commercial and non-commercial – were damaged by flying rocks.

While not an entirely new occurrence, the number of incidents have increased as of late.

So far, there have been no injuries but several vehicles have been damaged, including supply trucks carrying hazardous chemicals for Freeport McMoRan’s Safford Operations. The rocks have damaged vehicles from multiple trucking companies, including two in the last week that were hauling sulphuric acid. Gila Valley Central reached out to Freeport, but its media spokesperson did not return our inquiry in a timely manner.

Benally said the incidents appear to be random and nobody has been targeted. In fact, he said he didn’t even think the youths who are throwing the rocks even know who they are throwing at. He said they simply hide under the San Carlos/Peridot Bridge at the Graham County/Pinal County line and throw when they hear a vehicle coming.

“They hit a couple mine vehicles, and they hit a fire truck yesterday,” Benally said. “They’re standing at the river bottom and throwing it up as they hear a vehicle go past. By the time it’s reported and we get there, they’re already into the brush.”

Recently, San Carlos Police Department officers managed to track down two juveniles who were seen running from the area after an incident and apprehend one of them. The car the juvenile damaged with the rock ended up belonging to a local resident, and the victim and the juvenile’s parents worked out a solution of restitution and no charges were pressed.

Benally says his department has addressed the situation with increased patrols utilizing off-duty officers working the area solely to combat the issue and by releasing public service announcements on local radio. The PSA’s advise about the dangers of such activity and ask the community to speak to their children about the problem and report if they see people throwing rocks.

“There are a lot of people (here) who listen to the radio, and that (PSA) is broadcast in English and is also broadcast in Apache,” Benally said.

Benally advised motorists to be cautious when driving in the area – especially when crossing the bridge – and to report such activity if witnessed.

“If you see rocks on the bridge, be cautious when driving across not to run over the rocks and also watch for rocks coming up from the side,” Benally said. “If you do see rocks and kids running from there, please call 911 so we can get on those right away. We hope to get it curbed . . . We’re trying to get control of this thing so people are held accountable for it.”