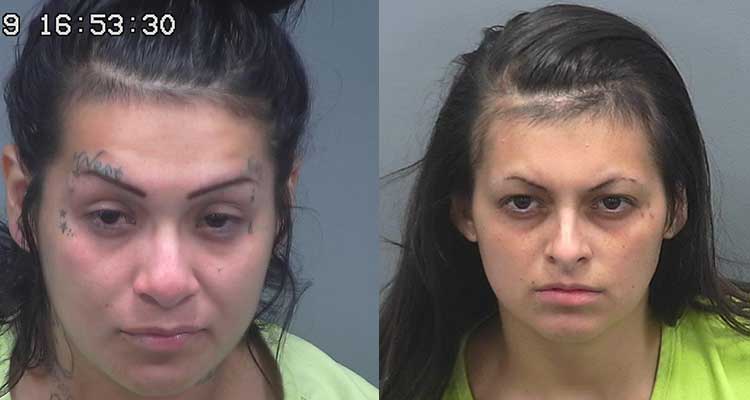 A Safford police officer on patrol last Wednesday observed a woman he knew to have warrants for her arrest riding in the front passenger seat of a vehicle. The woman, identified as Aaliyah Palacio, is a suspect in an alleged car theft that occurred in August. The officer apparently recognized Palacio, and knew that she had an outstanding felony warrant for her arrest. In addition to recognizing Aaliyah, the officer noticed that a small juvenile was riding on the lap of somebody sitting in the rear driver’s side seat. The child was obviously unrestrained.

The officer had the driver stay by his patrol vehicle while he made contact with the front seat passenger. She also told the officer that she was Leticia. The officer could see that the woman in the back seat with the child on her lap was Leticia, having had prior police contact with both women. The officer told Aaliyah that he knew she was lying and that he would be able to verify her identity, but she continued to maintain her false identity. Another officer on duty verified Aaliyah’s identity and told the officer at the scene that she could be identified by tattoos of dots and stars below her right eye as well as the word, “West” over her right eye.

The officer had Aaliyah step out of the vehicle and handcuffed her. She told the officer that she, “didn’t want to get caught up,” because she was already on probation. The officer placed her in the back seat of his patrol vehicle. A search of the vehicle where Aaliyah was sitting produced a red zipper bag pushed in between he seat where she was sitting. The bag contained meth, 4 syringes and a spoon.

Leticia was also asked to get out of the back seat of the vehicle and the car was searched in the area she was sitting. Police found a scale in the back seat along with a usable amount of meth wrapped inside a folded piece of paper. A box was also found with makeshift tattoo equipment inside. Leticia was handcuffed and placed in a patrol vehicle.

Police then spoke to the driver again, who admitted that he was a meth user. He told authorities that he had only been dating Aaliyah for two weeks and claimed that he thought her name was Leticia. The driver and the young child were released from the scene. The driver apparently wasn’t charged with anything related to the contraband found in the vehicle because the two woman had claimed ownership of it. A relative brought a car seat for the young child.

Aaliyah was transported to the Graham County Jail and booked for possession of a dangerous drug, possession of drug paraphernalia and 2 outstanding warrants for her arrest. While at the jail the arresting officer questioned her about about a stolen vehicle report in which she had been named as a suspect.

Leticia was also transported to the the jail and booked for possession of a dangerous drug, and possession of drug paraphernalia.