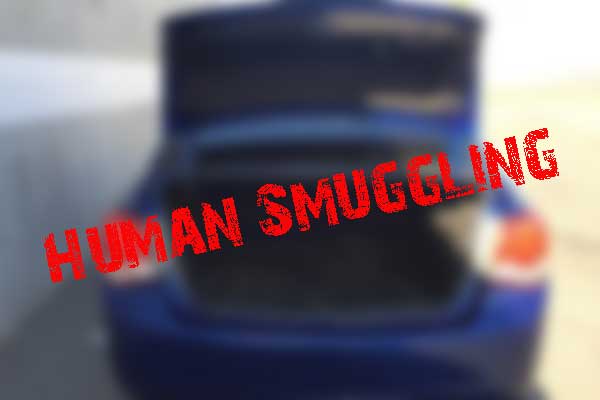 The agent observed a blue Chevrolet Cruze pull over to the side of the road and two visible passengers, the 18-year-old driver and her 16-year old sister exit the vehicle. As the agent approached, he observed subjects in the back seat attempting to conceal themselves with a blanket.  The two adult males were found to be illegally present in the country.

While searching the rest of the vehicle, the agent found two more illegal aliens in the trunk. They claimed to have no knowledge of how to let themselves out.  All four men, ages 18 to 31, had entered the country illegally. Three were from Guatemala, and one from Mexico. All were arrested for immigration violations and transported to the Tucson Station for processing.

The driver was placed under arrest for alien smuggling. Her sister was released to a legal guardian.

Federal law allows agents to charge individuals by complaint, a method that allows the filing of charges for criminal activity without inferring guilt. An individual is presumed innocent unless and until competent evidence is presented to a jury that establishes guilt beyond a reasonable doubt.

U.S. Customs and Border Protection welcomes assistance from the community. Citizens can report suspicious activity to the Border Patrol by calling 1-877-872-7435 toll free. All calls will be answered and remain anonymous.