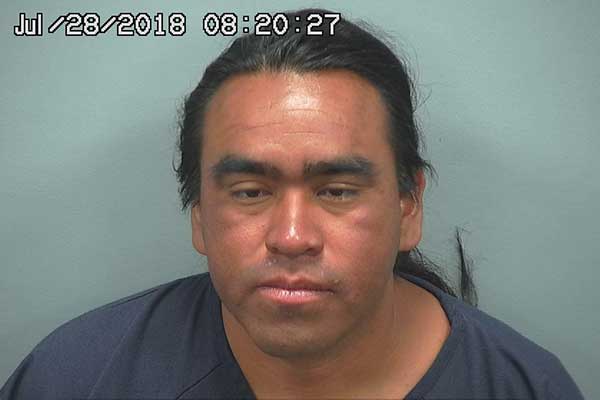 SAFFORD – Police were advised Friday of a possible assault taking place in the area of KFC on Highway 70 in Safford. Witnesses said they saw a Native American Male assaulting a Native American Female. The reporting party told authorities that the couple left and were walking toward Walgreens. The man was described wearing a white shirt and shorts and was following the woman.

An officer pulled into Walgreens on the north side and drove toward Walmart. He saw a man matching the description following a woman who seemed to be trying to get away from him. The woman told authorities that the man had her bag and would not return it. The officer asked the man to walk over to him and sit down. The man asked ‘why’ and didn’t do as asked. The officer again told the man to sit down and asked the woman to stand by his patrol car in an effort to separate the two. The woman began to walk away while the officer was watching the man. The woman crossed highway 70 where she was contacted by another police officer and brought back to the scene.

The man, identified as Corey Dean, said that his female companion had some of the money he got panhandling and he wanted it back. When asked why he hit the woman, Dean replied that she had hit him first. He later stated that he wanted his money and may have pushed her.

According to the police report, the woman had bruising on her face in different stages of healing and some recent red marks. She told police that just wanted her bag back. When authorities told her that witnesses had reported that Dean had been hitting her, she said that they had argued about the money and she woke up with the bruises. She later admitted that Dean had hit her and that she would like her bag back.

Due to the witnesses statements, both Dean’s and the womans statements about the confrontation and the visible injuries on the woman’s face, Dean was placed under arrest for assault and disorderly conduct domestic violence.