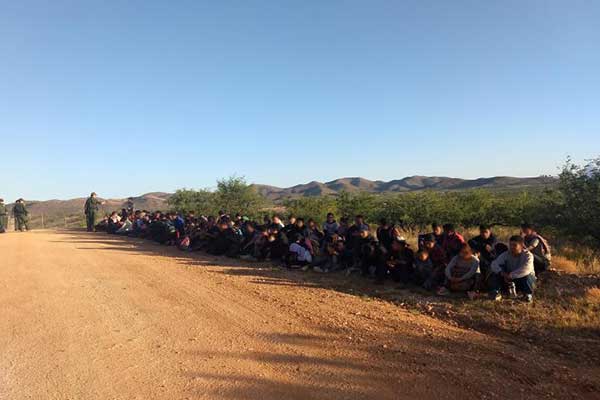 TUCSON, Ariz. – Tucson Sector Border Patrol agents are facing complex challenges with concurrent law enforcement and humanitarian missions in what appears to be a new normal on the Southwest Border.

“Alien smuggling is a lucrative business,” said Roy Villareal Tucson Sector Border Patrol Chief. It is orchestrated by traffickers who use these large groups to create a vulnerability in operations.”

In late May, during a bi-national operation, numerous cartel observation positions were discovered and dismantled by a joint U.S./Mexican law enforcement team, highlighting the dangerously dynamic environment along the border. Just days before Tucson Sector seized an ultra-light aircraft loaded with more than 143 pounds of methamphetamine and fentanyl south of Tucson.

Yesterday, a single group of 134 Central Americans surrendered to Border Patrol in Sasabe after walking around the west end of the pedestrian fencing. Approximately 10 hours later, another group of more than 30 people crossed at the same location.

With the increase of the vulnerable migrant population crossing the border, humanitarian needs have multiplied exponentially, overwhelming transportation, medical, and manpower resources. The strain and human toll is frustrating for migrants, their families, the American public, and law enforcement agents alike.

The direct risk to human health and safety is a result of robust criminal endeavors. Transnational criminal organizations are employing dangerous and unconventional methods to smuggle humans and drugs into the United States, hindering law enforcement and first responder capabilities.

Guatemalan Woman Dies After Group gets Lost in Desert: Infrastructure Could have Prevented this Says Yuma Chief

A Guatemalan woman was found dead in the desert after she fell ill on the Barry M. Goldwater Firing Range Monday and was left behind by the group she was traveling with.

Yuma Sector Border Patrol agents working with an Air and Marine Operations helicopter crew recovered the body of the deceased woman in her 40s.

Emergency services in Mexico informed the Yuma Sector Operations Center at approximately 4:38 p.m., that they had been contacted by a group of 10 illegal aliens lost somewhere in the desert. The caller stated that one of the females in the group was losing consciousness and they left her behind.

The Yuma Sector Border Patrol Search Trauma and Rescue Unit, along with other agents, and a helicopter from AMO, deployed to the Barry M. Goldwater Bombing Range east of Yuma in search of the woman.

Within 78 minutes, the helicopter crew located the woman’s remains and five illegal aliens from the air. Agents on the ground located four more persons nearby.

The cause of the woman’s death is currently under investigation. Her remains were transported to the county medical examiner’s office, after which they will be transported back to Guatemala with assistance from that country’s consulate.

The other migrants traveling in her group were found to be in good health after an initial medical evaluation and were transported to the Yuma Border Patrol Station for immigration processing, where they received food, water, and care while awaiting prosecution for immigration violations.

“This was an unnecessary death,” said Yuma Sector Chief Patrol Agent Anthony J. Porvaznik. “This group should never have been on the Barry M. Goldwater Bombing Range.  Yuma Sector agents have seen an increase in illegal entries in this area and we feel strongly that effective anti-pedestrian/vehicle barriers are needed to improve the security and safety there.  The planned border infrastructure improvements on the BMGR will aid in the impedance and denial of illegal entries along the Southwest Border, which will decrease the likelihood of unnecessary death, injury and criminal smuggling activity in this area.”