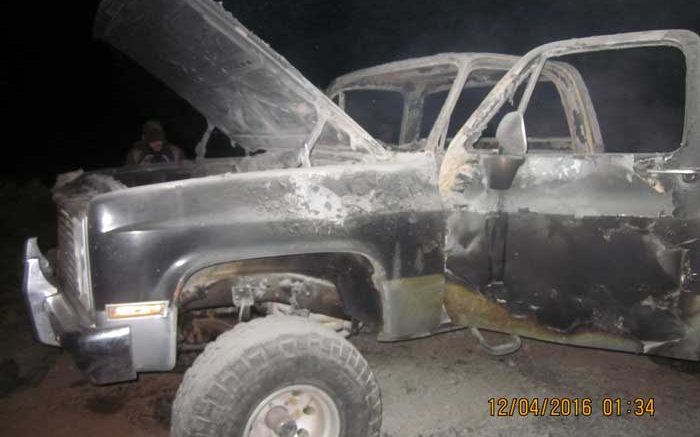 Contributed Photo/Courtesy GCSO: A truck burned up after suffering a failure during a nighttime desert joyride late Saturday night.

GRAHAM COUNTY – A pickup truck burned to the ground late Saturday night after suddenly catching fire during a desert joyride. There were no reported injuries.

Authorities and firefighters were dispatched at about 11:56 p.m. to the desert south of the Central Cemetery regarding a truck on fire.

Upon arrival, a deputy met with the driver, who said he was heading up a hill when he suddenly heard a pop. Afterward, flames began shooting out from under the hood. 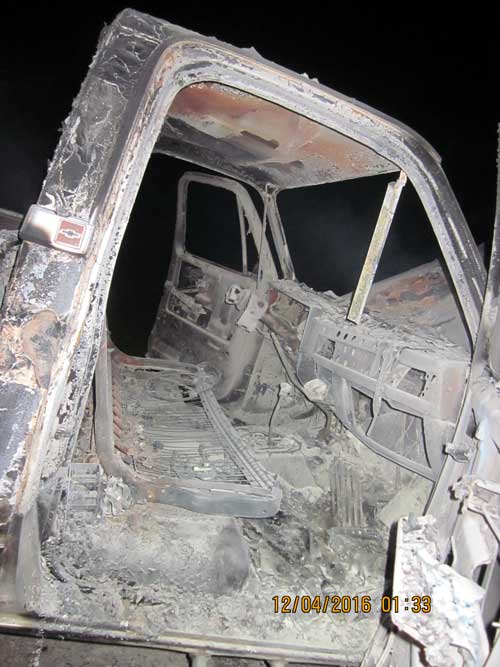 Contributed Photo/Courtesy GCSO: The interior of the truck was completely burned.

The driver said he pulled over and attempted to put the fire out by throwing dirt on the vehicle, but the fire continued to spread.

The owner of the truck corroborated the driver’s rendition and said flames started under the hood and then came through the firewall after they went up the hill. He reported he did not have insurance on the truck.

The Thatcher Fire Department’s brush truck responded to the scene and put made sure the fire didn’t spread into the desert. However, the truck was a total loss.

The truck was left at the scene in the desert as the owner said he would return as soon as possible to retrieve it.