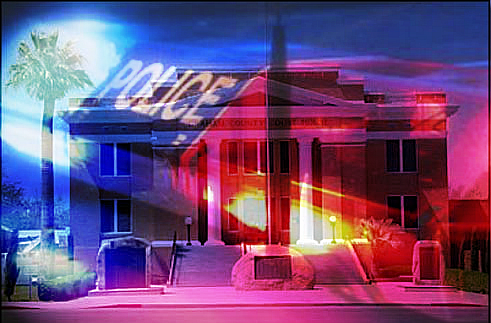 Gila Valley Central Photo: An anonymous tip led to the removal of children from a home deemed unfit and unsafe.

SAFFORD – An anonymous tip led to the removal of children from a home that was deemed “unfit and unsafe” by employees of the Arizona Department of Children Services on Tuesday afternoon.

DCS received a tip that one of the children in the home was badly burnt and nobody had sought out medical treatment. The department requested Safford officers accompany caseworkers to the residence, located at 818 W. 13th St.

According to a Safford Police report, the child suffered a burn to her chin and neck area that happened when she and other children were playing with a torch lighter. A torch lighter is commonly a windproof lighter that utilizes butane fuel to emit a continuous blue torch flame. The lighters are recommended for cigar aficionados but are also commonly used to smoke illicit drugs.

An officer noted the burn appeared dirty, was scabbed over and looked to be in the beginning stage of infection. Additionally, the officer reported the injury did not look like it had received any medical treatment.

The grandmother of the injured child, Margie Anzar, allegedly told officers that she treated the burn with Aloe Vera. The victim’s mother, Cassandra Anzar, allegedly said they were treating the wound themselves with over-the-counter medication.

As investigators examined the two-bedroom residence, they deduced that 16 to 18 people were living there and that it was unfit and unsafe for the children. At that time, DCS employees decided to perform an emergency removal of the children from the home.

In 2013, Sean Michael McCain, 27, was sentenced to nine years in prison after pleading guilty to child abuse – a Class-2 felony – for burning his then 2-year-old stepdaughter and one count of child abuse – a Class-4 felony – for failing to seek medical treatment for 12 days. He was also ordered to serve lifetime probation upon his release designated to be no less than at least 10 years. With credit for good behavior, McCain is scheduled to be released from prison Oct. 23, 2020.

In the McCain case, the baby had several infected second- and third-degree burns on her back, stomach, buttocks, genital area, hand, wrist, forearm and elbow.

The mother of the burned baby, Ashley Kristine McCain, 26, pleaded guilty to one count of child abuse – a Class-5 felony – for not seeking medical treatment for her daughter and was sentenced to one year in jail followed by 10 years of supervised probation.

In that case, a doctor’s assessment given in Sean McCain’s presentence report theorized the baby was held under extremely hot water for several minutes to cause an immersion burn. Also, a skeletal survey on the child came back as abnormal and showed she was healing from multiple fractures. The survey led the doctor to believe the child was living in danger in the household.