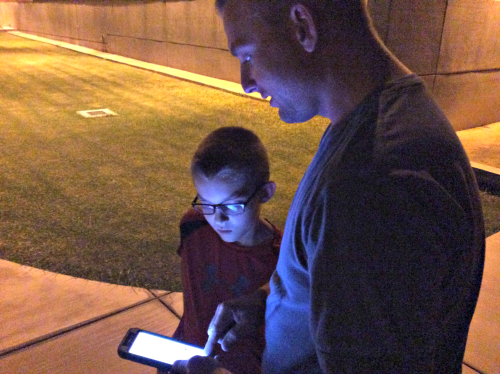 Thatcher — Over the course of five days, our local population has been separated into two obvious groups; those playing Pokémon Go, and those who are wondering what this new Pokémon game craze is all about.

Pokémon Go is free, location-based mobile device game. It uses a device’s Global Positioning System for a real-world location to bring up images of Pokémon on the device’s screen overlaid on top of what the user is seeing in front of them.  In the game, players capture Pokémon creatures, battle them against each other and train virtual Pokémon, who appear throughout the real-world landscape. The players have a digital character they create to represent themselves and they choose one of three teams.

Some may remember Pokémon from the earlier card game and television cartoons from twenty years ago. However, you don’t have to have any previous experience with the Pokémon to play the game, and it has become the most downloaded smartphone app in the United States.

“It’s been a heck of a lot of fun,” he said. “There is a great social aspect to the game that many players appreciate. When I saw people walking around having their face down in their cell phone, it was like, ‘You playing Pokémon?’ ‘Yeah, we’re playing Pokémon!’ It’s just one of those things where you know you’re part of the same fan base and you’re enjoying the same thing and there’s just this instant connection that is made. Let’s go be nerds together and hunt that Pikachu over there.”

Scott said he also enjoys the game because it is a good way to relieve stress.

“Going to work, getting off of work, it’s just like I want to go play Pokémon,” he said. “It’s very, very relaxing to get out and explore.”

Gila Valley Central visited the Eastern Arizona College campus’ Pokémon hot spot at the clock tower Tuesday night and came upon a group of players. The technical name for the spot where people can level up and choose a team is called a “gym.” There are very few gyms in the Gila Valley, but the major one for the Pokémon Go game is at the clock tower.

At 9:30 p.m., there were at least thirty people wandering the EAC campus. There were families, groups of friends and bands of kids walking around and collecting Pokémon creatures, leveling up, picking teams and trying to take over the clock tower gym.

Pokémon Go has seemingly taken over the Gila Valley. Players say is a great way to meet friends, get some exercise and try something new. Playing the game takes users on various trips and first responders advise players that when walking in the Arizona heat remember to stay aware and drink lots of water.