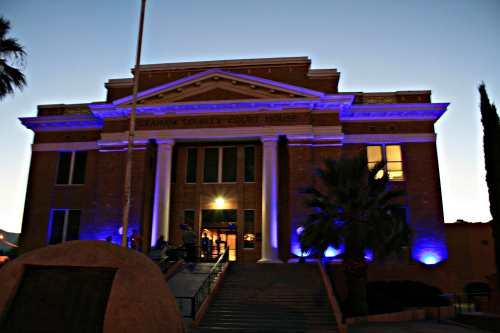 A small group gathered on the steps of the courthouse Monday night to attend the local support for Lighting Arizona Purple, a domestic violence awareness campaign that is sweeping the state. Various cities throughout Arizona have already lit buildings purple, including the Arizona State Capital and the University of Phoenix Football Stadium in Glendale, the home of the Arizona Cardinals.

Sandy Garza, an outreach advocate for the Mt. Graham Safe House, told Gila Valley Central that the main intention of the event was to bring attention to the safe house.

“Whenever we have a booth anywhere, people just walk right by us,” Garza said, “They say, ‘Oh it’s just the safe house.’”

Garza said the event was not only to bring awareness to the safe house but also to the various forms of abuse. She told Gila Valley Central that just because an individual does not leave a mark or a bruise, it does not mean the individual isn’t being abusive if he or she emotionally manipulates, isolates or verbally demeans his or her partner.

Being a an outreach advocate, Garza told Gila Valley Central that she wants everyone to know that just because they do not have a ride, it doesn’t mean that they can’t get away. It is Garza’s job to go and help individuals who feel they are in a stranded situation and relocate them to the safe house.

Prior to a symbolic balloon release, Graham County Superior Court Judge Michael D. Peterson gave a short lecture to those gathered at the event.

Peterson stressed domestic abuse prevention as well as awareness. He told the attending audience that he had been blessed with five daughters, but that with today’s statistics, he could very well have to console one of them.

“Statistically, one of my five daughters will be a victim of domestic abuse,” Peterson said. 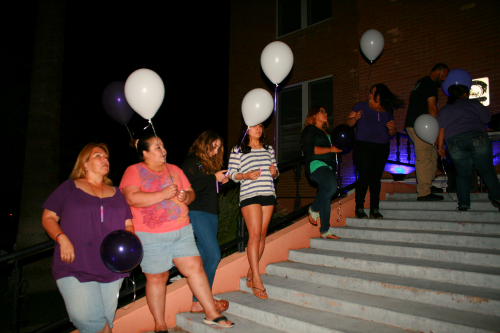 Brooke Curley Photo/Gila Valley Central: Individuals attending the Light Arizona Purple event held on to their balloons, waiting for the signal to let them fly.

Lighting the court house purple took 10 months in advance for budget planning and two solid weeks of tech installation. Although the city technicians were still working out the kinks in the light programming the day of the event, everything worked out for the best just hours before sunset.

After Peterson’s remarks and a prayer, the attendees released a two dozen bundle of purple and white balloons into the darkness of the night sky. As the balloons flew high and free on the cool autumn breeze,  D.J. Mike Gutierrez played Martina McBride’s Independence Day. As the music played, those in attendance stood silent and motionless on the steps of the courthouse until the balloons faded completely from view.