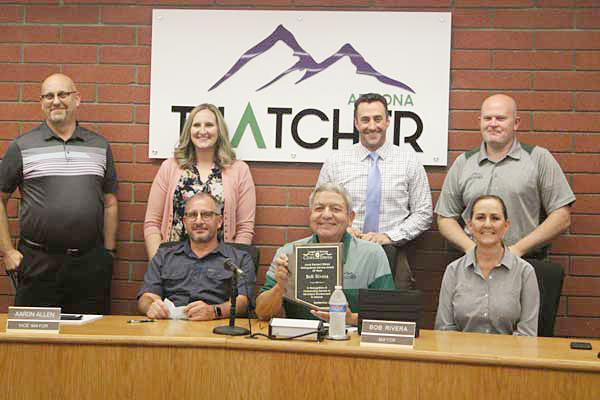 Thatcher Mayor Bob Rivera, front row center, is joined by the Thatcher Town Council after Rivera received a plaque of appreciation from the Arizona League of Cities and Town for his decades of service. Rivera is retiring from the council at the end of this year. - David Bell Photo/Gila Valley Central

THATCHER — Following his decision to not seek re-election and retire from the Thatcher Town Council, Mayor Bob Rivera received tribute from the Arizona League of Cities and Towns.

Rivera received a plaque of appreciation from the League during Monday’s Thatcher Town Council meeting.

“It’s an honor to represent, not only the League, to represent the Town of Thatcher and the area around us,” Rivera said.