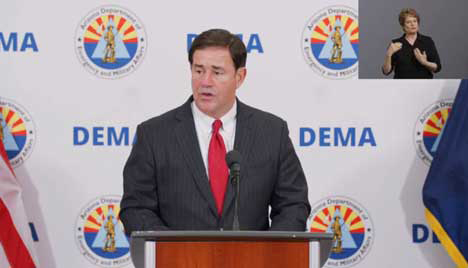 PHOENIX — With COVID-19 numbers trending downward in Arizona, Gov. Doug Ducey said the state is turning its attention to the coming flu season.

“Of course, we don’t want anyone to catch COVID that can avoid catching it. And it’s the same philosophy with the flu,” he said during a press conference Thursday.

To that end, Ducey and Dr. Cara Christ, director of the Arizona Department of Health Services, are strongly recommending all Arizonans get a flu shot before the traditional start of the flu season. However, there were no details on if those flu shots would be made available for free or must be purchased.

“I want to find a way that any Arizonan that wants to get a flu shot, can get one; details to follow,” Ducey said.

Health experts are wary about the coming flu season — which typically hits Arizona in late October or early November —and its interaction with COVID-19. When the coronavirus first started to spread, the Southern Hemisphere was starting its flu season; however, countries are experiencing an uncharacteristically light number of flu cases, giving Northern Hemisphere researchers little data to work with.

Flu vaccine manufacturers have announced plans to significantly increase production for the coming year, with two manufactures expecting to produce a combined 198 million doses. However, another impact of a light flu season in the Southern Hemisphere means vaccine developers have little data on which genetic strains are dominant this year, creating concern about efficacy involving any vaccine.