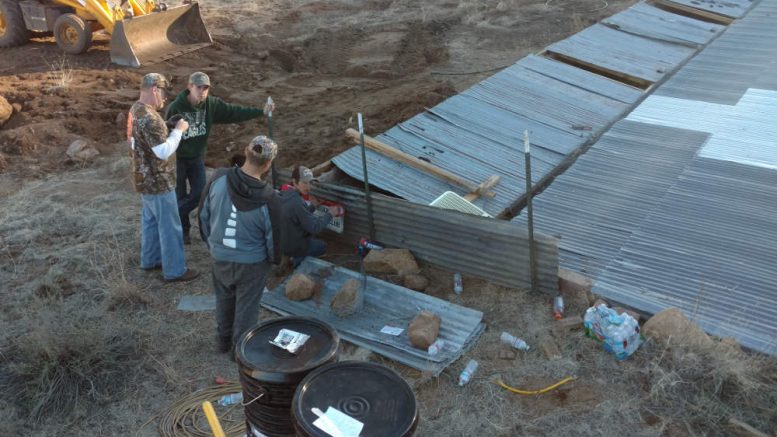 GRAHAM COUNTY – Braving temperatures down to 25 degrees, the Southeastern Arizona Sportsmen Club (SEAZSC) met at the O Bar O Ranch in Stockton Pass on Saturday to renovate a system called a water drinker that provides rainwater for livestock and wildlife. There were 18 people present, representing the SEAZSC, the Arizona Department of Game and Fish, and the O Bar O Ranch.

Daniel Ward, SEAZSC Habitat Chairman, said the ranch benefits the most from the drinker, but the project is in the best interest of several groups.

“It is basically a collaborative effort between Game and Fish, the rancher and the Sportsmen Club,” Ward said. “We all realize that the water is extremely important for the animals, especially in the summertime before the monsoon comes.”

The Forest Service also benefits as owner of the Stockton Pass section leased by the O Bar O Ranch. 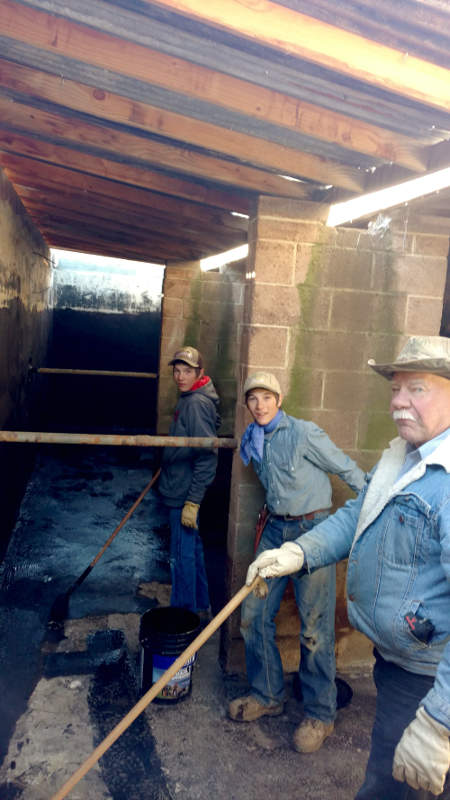 Ninth graders Gabriel and Ethan Todd are the twin sons of the ranch owner, and they were present as ranch representatives. Gabriel Todd  said the project is helpful for ranch management.

“It’s so that the cattle spread out more in the pasture,” he said.

The cattle prefer to stay in one section of the pasture, but the presence of water can mitigate that. The drinker also attracts wildlife.

The system has three parts: a 50,000 gallon in-ground storage tank, the drinker itself and water lines. Rain is caught in the tank, piped down hill to the drinker and released by a float valve as animals drink. The group worked to clean, patch and re-seal the 50-year-old tank with tar to restore holding capacity. An additional drinker also services a neighboring ranch from the same tank.

Invited by ranchers, the SEAZSC tries to restore five drinkers yearly, completing all projects in the spring to allow time in the fall for hunting. SEAZSC instructor David Gunnett said sometimes the restoration is completed in consecutive weekends. This restoration was the first of the year, and Ward said he and the rancher worked through the week to prepare the tank for a big push Saturday.

Ward noted that the project is central to the purpose of the SEAZSC.

“Habit improvement is one of our major goals,” he said.

Other habitat projects include trash clean up and fence repairs. Ward added that education for hunters and the general public is also a priority.

Gunnett said the club hosts several educational seminars in September every year. The club also runs the Big Buck Contest, which raises funds for the habitat projects. According to Gunnett, the club was formed by local men who wanted to make a difference.

Ward, who brought his three children and a friend, encourages youth involvement.

“It definitely teaches the kids to work, to volunteer,” he said. “It teaches them to give back. We hunt, and so they understand that the animals we hunt need to drink water, so it’s their way of giving back as well.”