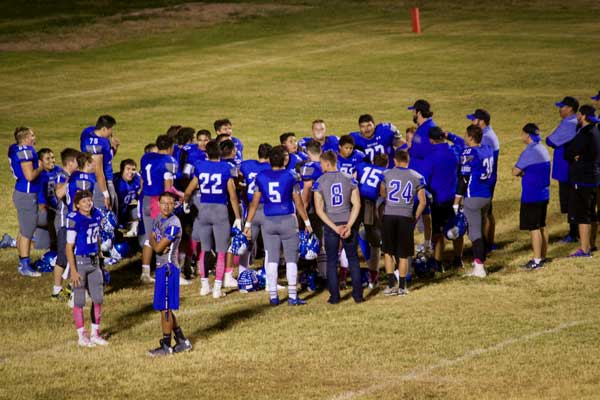 Jon Johnson Photo/Gila Valley Central: The Safford Bulldogs cruised to a 67-14 victory over the Phoenix Benjamin Franklin Chargers on Thursday.

SAFFORD – The Phoenix Benjamin Franklin Chargers (6-2 overall, 1-2 section) lost their credit Thursday night as the Safford Bulldogs (4-4 overall, 2-1 section) ran up the bill to a 67-14 shellacking.

The Chargers marched in with the more impressive 6-1 record, but that didn’t faze the Bulldogs, who were coming off their blowout victory over Coolidge last week.

The beating started on the second play from scrimmage as Safford’s Manuel Aparicio kept the ball and zoomed untouched along the left sideline for a 42-yard touchdown and the game’s first score.

After a quick three and out, E.J. Estrada rattled off a 19-yard gain down the right side followed by another Aparicio run to bring the Bulldogs into the red zone.

Aparicio then rambled in from 12 yards out for his second score of the night and the route began. 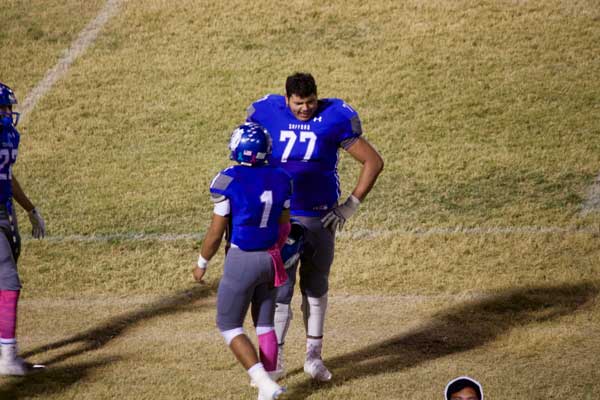 “We haven’t played real well at home this year, so the kids really wanted to come out and show,” Safford head coach Mike Alba said. “That was kind of the goal, get up on them early (and) take away their confidence.”

The Bulldogs finished with 382 yards rushing and 170 yards receiving for the game.

The Chargers began to move the ball on the Bulldogs but a couple of big open field solo tackles by Tevin Broadhead and Riley DeSpain put the Chargers in punt formation.

Facing fourth and 8 from the Bulldogs’ 36 yard line, the Chargers attempted a fake punt but Taylor Chambers could only muster three yards and the Bulldogs took over.

Safford then capitalized on the turnover with the play of the night as Cameron Abril gathered in Apricio’s pass and then pitched it to a streaking Estrada, who kept his balance going around the right side and raced 73 yards for his first points on the night.

Safford didn’t let up though, and following an interception by Broadhead, Aparicio tossed a beautiful 35-yard bomb to Abril who seamlessly gathered it for the score to put Safford up 26-0.

The problems continued for the Chargers as Izaiah Aguilar broke through and blocked their punt, giving the Bulldogs the ball at the 10 yard line.

A couple of plays later, Aparicio bowled his way in from the 2-yard line to put the Bulldogs up 32-0 to end the scoring in the first quarter. Aparicio would finish with four rushing touchdowns and one passing on the night. 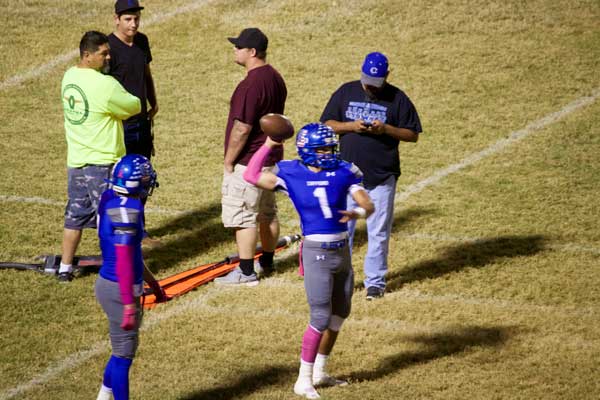 “We were kind of worried because they were 6-1, but we didn’t care,” Aparicio said. “The first run, they would bite on it, so I just kept pulling it . . . We came off right at the start. We were really hungry.”

The Chargers showed their moxie and quarterback Chase Adams tossed a nifty pass to Taylor Chambers for about 50 yards to set up Benjamin Franklin in position for its first score.

Adams took advantage of the stunned Bulldogs on the next play and tossed a nice looking 21-yard touchdown pass to Chandler Miles to get the Chargers on the board.

Former Thatcher head coach Dave Jefferies now coaches Benjamin Franklin and did not have the homecoming he was hoping for.

The Bulldogs came roaring back after the Chargers’ score, and, after Aparicio scored a big gain down the left sideline, Estrada capped the drive with his second touchdown on the night.

The Chargers then struck back as Adams ran it in from 15 yards. However, it was the last points on the night for Benjamin Franklin.

The Bulldogs tacked on a couple more scores before the break, including a 7-yard run by DeSpain, who backed his way in on second and goal to give Safford a 53-14 lead at the half.

Quarterback Payson Harsh opened up the second half with much like Aparicio did in the first half and scored on a 77-yard burst through the middle.

DeSpain capped the night’s scoring with a 55-yard TD run to send the Chargers on their way back to Phoenix.

“I think right now we’re playing at a little higher pace than we have been,” Alba said. “(We) finally got (our) confidence back. After that Thatcher loss we lost a lot of confidence.”

Safford has a bye next week and will next face Globe (4-3 overall, 0-2 section) on Oct. 21. Globe lost Friday night, 44-13 to Coolidge, which Safford demolished the previous week.

The Bulldogs’ playoff hopes could rest on their final regular game of the season Oct. 28 at Queen Creek American Leadership Academy (7-1 overall, 3-0 section), who is unbeaten at home.